As Lebanese authorities blame a stock of 2,700 tonnes of ammonium nitrate for the blast that devastated swaths of Beirut, experts have questioned why such an explosive material was stored for so long, so close to the heart of the city of more than 2m people.

The chemical compound is a cheap and effective fertiliser favoured by farmers for their winter crops, but also an explosive product and sought after ingredient for terrorist bombmakers.

Lebanese officials said the ammonium nitrate had been stored in a warehouse at Beirut port, which sits on the northern tip of the capital, in what Prime Minister Hassan Diab described as a “dangerous” warehouse for six years.

Hamish de Bretton-Gordon, a former commander of the UK’s chemical and biological weapons regiment, said a populated area was a “strange place” to store such a potent material.

“It looks like the first explosion created a fire, which became the accelerant to create the ammonium nitrate explosion itself,” he said, adding that normal practice would be to deposit the material on very secure fireproof containers, compartmentalise them carefully and make sure there is no proximity to fire or source of ignition. “You would also want to ensure excellent security around the perimeter.”

Julia Meehan, managing editor for fertilisers at ICIS, a market data agency specialising in petrochemicals and fertilisers, said there were “really strict rules and regulations about handling ammonium nitrate” because of its use for explosives. 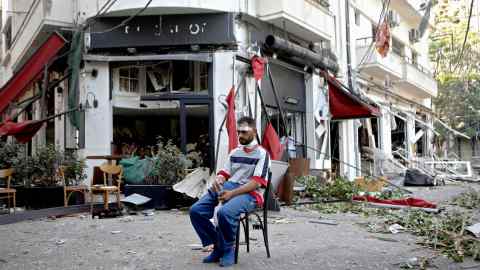 She said the first recorded use of the chemical as an explosive was in Germany in 1921, and noted that Turkey banned the sale and distribution of ammonium nitrate four years ago after it was used in a spate of suicide attacks.

“There’s been lots of industry chatter . . . some are quite incredulous that such a potentially hazardous product was stored in the heart of a city,” said Ms Meehan. “The other interesting thing is the amount of time this ammonium nitrate was in storage, because typically the shelf life is six months for bulk storage in a warehouse. Like with anything, it goes out of date — it won’t do what it says on the label.”

So far, there has been no suggestion from Lebanon’s authorities that the explosion was caused deliberately as they continue their investigations. Instead, they appear to believe it was a tragic accident.

Michel Aoun, Lebanon’s president, said the ammonium nitrate was stored at the port without safety measures, describing it as “unacceptable”. 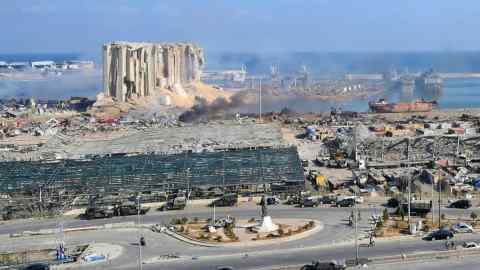 Andrea Sella, a professor of inorganic chemistry, UCL, the London university, said the fact that such a quantity would have been left “unattended for six years beggars belief and was an accident waiting to happen”.

“Poorly stored ammonium nitrate is notorious for explosions,” he said, referring to previous explosions in Oppau in Germany, Waco in Texas, and Tianjin in China.

However, to detonate this quantity of ammonium nitrate would require a combination of heat plus a “shockwave” caused by an explosive, said John Wyatt, a former bomb disposal expert with the British Army.

“It would need a hell of a boost,” said Mr Wyatt. “Just to put this in context, if you’re building a bomb with a tonne of explosive in a dustbin, that bin would still need a one ounce primer like Semtex connected to a detonator to be sure it would all be set off at once. A fire in a warehouse alone wouldn’t set off the ammonium nitrate in those quantities [reported in Beirut].”

Video footage of the blast posted on social media showed a fire at the port that spitted out explosive flashes and appeared to trigger a massive secondary explosion.

A possible source of the ammonium nitrate is a shipment of fertiliser destined for Mozambique. In 2013, the Rhosus, a Russian-owned ship flying a Moldovan flag, set out from the Georgian port of Batumi for Mozambique carrying 2,750 tons of ammonium nitrate, according to documents published five years ago by lawyers representing the ship’s crew in a dispute.

The ship ran into technical problems during the voyage and docked at Beirut, where officials barred it from sailing further. The ammonium nitrate was then discharged to Beirut’s port, according to the lawyers’ documents.

Igor Grechushkin, the ship’s Cyprus-based owner, did not immediately reply to a request for comment.

Mr de Bretton-Gordon said that while there was no evidence that the explosion was related to any sort of attack, such a large concentration could have been a potential target for extremist groups.

“I have seen Isis in Iraq target chemical storage facilities predominantly to create a downwind hazard [of toxic gases],” he said. “This is something which terrorists look at, which is why there are such strict rules on dealing with such volatile substances. This must be a real wake-up call about the security of toxic materials.”