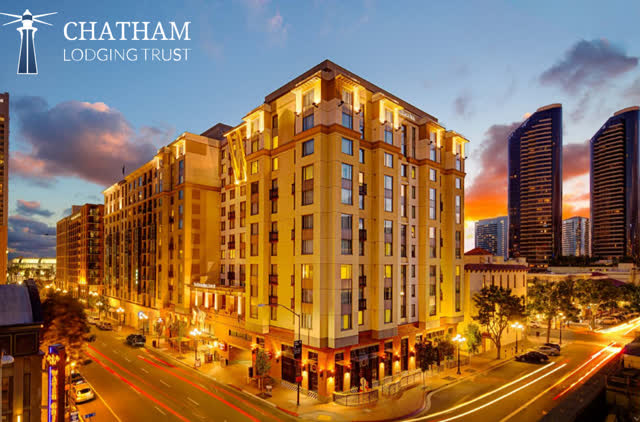 The lodging industry has been at the epicenter of the COVID-19 crisis in much the same way as airlines have been. Demand for lodging, obviously, fell off a cliff when stay-at-home orders were issued worldwide and, to some extent, are still in place. However, it is my view that the industry will return to normal levels – or close to it – in the coming years, and therefore, some stocks in the group look quite cheap.

One such example is Chatham Lodging Trust (CLDT), which trades at a small fraction of its pre-crisis levels. The dividend has been suspended and maybe for some time, but I believe Chatham will return to former levels of profitability in the coming years and that the eventual yield on cost for buyers today will be in the double-digits. To boot, Chatham is cheaply valued as well, so I see it as a strong buy.

How is Chatham faring?

Obviously, COVID-19 made a huge mess of things for the lodging industry. Airlines saw traffic essentially stop, and with stay-at-home orders across much of the world, there wasn’t any reason to go to a hotel as trips were cancelled en masse. That took a massive toll on hotel operators’ revenue and profitability, with Chatham included. 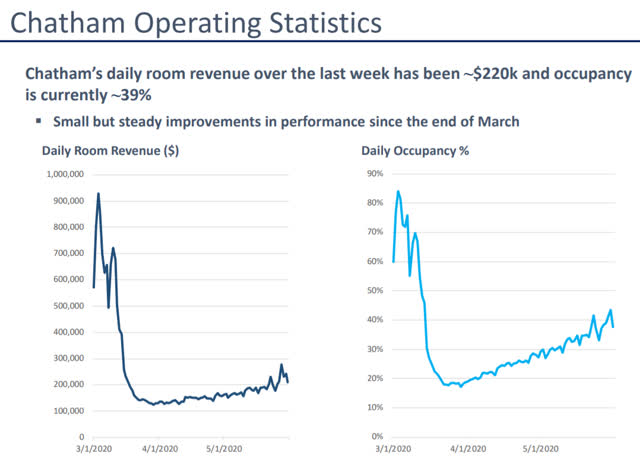 Daily room revenue was in the area of $700k or $800k in early March but fell to just over $100k per day at the worst of the crisis. That’s horrible, but the good news is that there has been steady improvement since the nadir in March for the industry and Chatham, in particular.

We can see that occupancy has doubled since the March low, and pricing power appears to be intact because occupancy and daily room revenue are rising at roughly congruent rates. That’s really terrific news because one worry for any entity in a crisis is that it will sacrifice pricing and profitability to build revenue back up, but that does not appear to be happening with Chatham. This is real demand at normal prices, and the future looks better and better as time goes on. 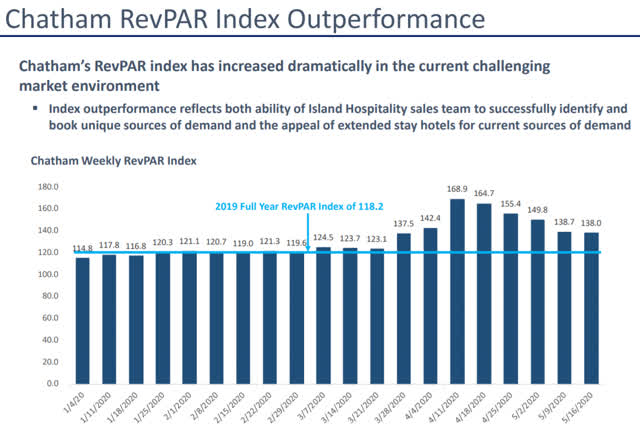 Indeed, Chatham has managed to actually outperform its 2019 RevPAR index for nearly all of this year, with much stronger values since the crisis began. This is robust evidence that pricing power is intact, which is key for the rebound I believe is coming in lodging.

This does not mean Chatham or the lodging industry is out of the woods just yet because there is a host of problems still facing the industry. However, this is strong progress, and it appears to me the stock isn’t pricing in this progress, which is why shares present an opportunity for the enterprising investor today.

One reason I’ve liked Chatham in the past is its exposure to the middle of the hotel market, wherein it provides limited service to guests, but clean, updated rooms to sleep in. 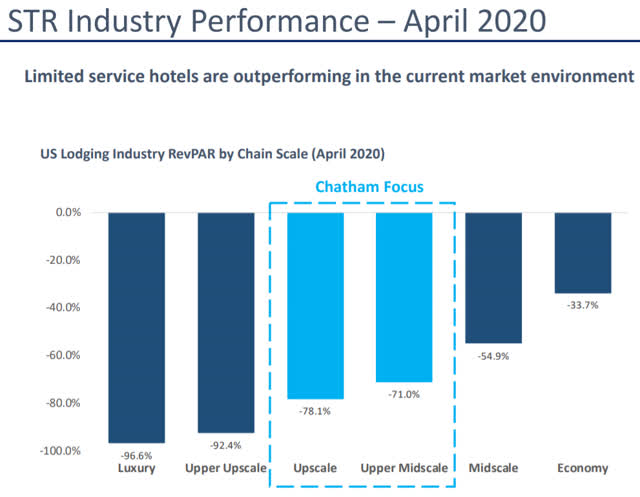 This segment appeals to the masses because it isn’t some stripped down economy hotel that offers little to nothing, but it isn’t an extravagant luxury hotel that has features and costs that are unnecessary for the average traveler. I think this value proposition will resonate even more with consumers during and after COVID-19, so I like how Chatham is positioned today with its portfolio. 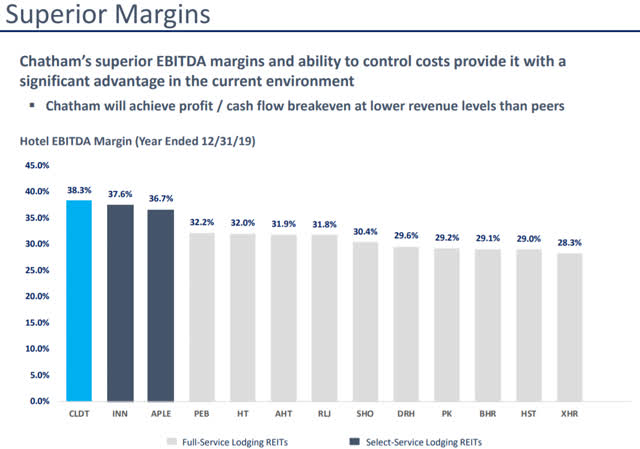 This value proposition has afforded Chatham class-leading margins during normal times, with full-year 2019 data depicted above. These higher margins mean that Chatham needs less revenue to generate positive earnings and cash flow than its peers, which because of their weaker margin profiles require more revenue to make the same amount of profit dollars. This is one more reason Chatham is well-positioned to come out of this crisis and return to some sort of normal.

Finally, the big question with just about any stock today is how much cash the entity has to withstand the crisis, and as it turns out, Chatham has plenty. 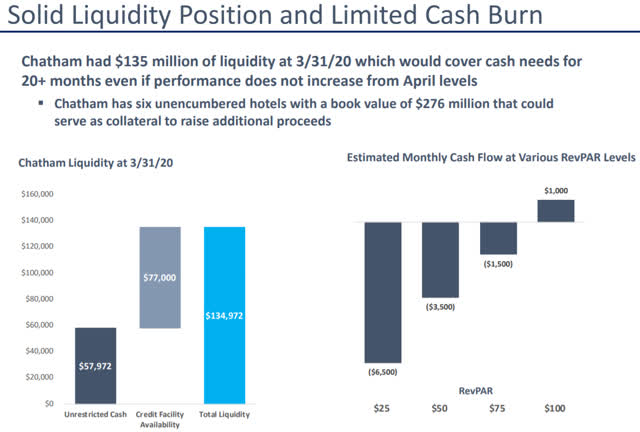 The trust had $135 million in liquidity at the end of March, an amount that would cover cash burn for at least 20 months at April’s performance level in terms of revenue and profits. The trust is, therefore, holding more than enough liquidity to weather this storm considering performance has already improved markedly from April’s levels, and unless there is a huge wave of closures again, I can see a fairly straightforward path to returning to normal for Chatham. Very importantly, survival, in my view, is not a question mark for Chatham.

To be clear, I still think lodging has a long road ahead of it. Occupancy and revenue levels are nowhere near close to what they were pre-crisis, and it will likely be into 2021 or perhaps even later before they are again. What I am bullish on is that lodging has proven very resilient over the decades as people want and need to travel for various reasons, and that isn’t going to change. How long it takes to get there is the question, but with the way Chatham is priced today, I think that is more than sufficiently accounted for.

Revenue for this year is expected to be just over half what it was in 2019, for all the reasons discussed above.

That is a truly disastrous performance for any entity, but that is the reality for Chatham given this situation. The good news is that there is a swift rebound next year that is expected, although revenue will still be well off its pre-crisis highs. Importantly, however, the road to recovery has already begun, so I see the ~$260 million revenue estimate for next year as not only reasonable but achievable, given the current trajectory of the recovery.

It’s the same story with funds from operations, or FFO, as we can see below.

FFO per share has been declining for years as the share count moved higher on roughly the same level of FFO on a dollar basis. The good news is that FFO per share was well in excess of the dividend, which was $1.32 per share for the past three years.

READ ALSO  How Long Before This Time Bomb Blows Up?

In addition, with FFO rebounding to $1 per share next year and, presumably, more after that with a continued rebound in lodging, the former dividend of $1.32 doesn’t seem that far out of reach. I think Chatham will be able to resume a payout of at least half its former level next year, meaning if we assume a dividend of 65 cents per share, Chatham would have a yield on today’s price of 8.7%. If we assume an eventual return to normal and a $1.32 per share payout, the yield would be in the mid-teens on today’s price.

While there is much work to be done for Chatham, the pieces are in place for recovery to continue. This is important because the stock isn’t being priced like recovery in FFO is coming, and it certainly isn’t being priced like a return to a meaningful dividend is coming. Both of these things make Chatham a buy today as I think you’ll see not the only capital appreciation but capital returns also make a comeback in the relatively near future.

Disclosure: I/we have no positions in any stocks mentioned, but may initiate a long position in CLDT over the next 72 hours. I wrote this article myself, and it expresses my own opinions. I am not receiving compensation for it (other than from Seeking Alpha). I have no business relationship with any company whose stock is mentioned in this article.