The decision by Turkish president Recep Tayyip Erdogan to fire the country’s central bank governor for the second time in little more than a year has left analysts perplexed and raised the stakes for the lira, which has slid to new depths in recent weeks.

Murat Uysal — who lasted just 16 months in the job — appeared to have done exactly what was wanted by Mr Erdogan, a life-long opponent of high interest rates.

During his stint at the helm, Mr Uysal slashed interest rates and largely resisted market pressure for a rate increase to avert a downward spiral in the lira, which has lost 30 per cent of its value against the dollar since the start of the year. But that did not protect him from an unceremonious removal announced in Turkey’s official gazette in the early hours of Saturday.

“It is a bit surprising,” said Turgut Kisinbay, director of fixed income research at the asset manager Invesco. “We are still scratching our heads to understand the trigger.”

The new governor, Naci Agbal, is a UK-educated former finance minister and one of the few remaining names in government seen as subscribing to mainstream economic thinking. In an interview with the FT in 2016, he stressed the need for the central bank to fight inflation.

He is well-regarded among international investors who got to know him during his time as under-secretary at the ministry of finance and later as minister.

“That department, especially at that time, used to play it very straight,” said Kieran Curtis, an emerging market debt manager at Aberdeen Standard Investments. “They were very good with investors.”

Born in 1968 in rural Bayburt, north-east Turkey, Mr Agbal studied public administration at Istanbul University before an MBA at the University of Exeter in the UK.

From the early 1990s, he worked as a bureaucrat in Turkey’s finance ministry, becoming under-secretary and, later, minister of finance. He forged a good relationship with foreign investors, and was known for his commitment to fiscal discipline.

He entered parliament under the banner of Recep Tayyip Erdogan’s ruling Justice and Development party in 2015, and is seen as a close ally of the president.

From 2018 until his surprise appointment as central bank governor, he served as head of the Turkish presidency’s directorate for strategy and budget.

Yet even if he knows what needs to be done to stabilise this lira, which has tumbled through a succession of record lows in recent weeks, it remains unclear whether Mr Agbal will have the political room for manoeuvre that has been denied to previous governors.

Mr Erdogan, who has described high interest rates as “the mother and father of all evil”, has for years pursued a framework of low rates, cheap credit and fast-paced growth even as it has caused persistently high inflation and an unstable lira.

The Turkish president has gained unprecedented power over Turkey’s institutions in recent years and has a record of putting pressure on the central bank to keep rates low.

In July last year, he sacked a previous governor, Murat Cetinkaya, because he “wouldn’t follow instructions” on interest rates.

That will make it difficult for Mr Agbal to implement the rate rise that economists say is badly needed to limit the country’s gaping current account deficit, tame inflation, tempt back much-needed foreign capital and restore the confidence of Turkish citizens in their own currency.

“The incoming governor’s job is not easy at all,” said Hakan Kara, who served as the central bank’s chief economist until he was removed from his post last year. Mr Kara said that the next rate-setting meeting on November 19 would be a critical moment. “He will be immediately tested in terms of his willingness and ability to deliver the necessary rate hike,” he said.

Others argued that the situation was even more urgent. Per Hammarlund, chief emerging markets strategist at the Nordic bank SEB, said he expected the new governor “to come out in front” and announce an interest rate rise before markets opened on Monday morning. He added: “If they don’t, markets will punish the lira very severely in the coming days.”

There were competing theories about why Mr Erdogan announced the abrupt change.

A ruling party official told Reuters that Mr Agbal, who is a close ally of the Turkish president, would be a “stronger central bank governor” who would take steps to halt the lira’s downward spiral. 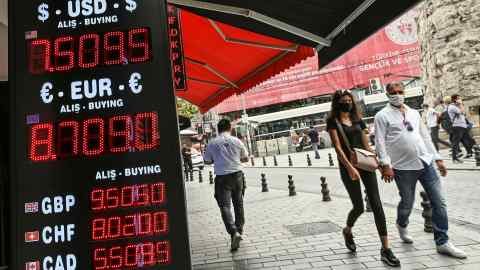 But another person familiar with the behind-the-scenes discussions told the Financial Times that it was precisely because of an attempt by Mr Uysal to lift the bank’s main rate last month — a move rejected by the president — that he was forced out.

The Turkish presidency, the finance ministry and the central bank did not respond to requests for comment on the reasoning behind the move.

Turkish opposition parties said that, beyond the choice of governor, the real problem was much deeper rooted economic issues and a political system that placed too much power in the hands of the president.

“We must not forget that the fundamental reason for the problems that the economy is experiencing is bad management and a partisan presidential system that shuns institutional . . . thinking, eschews meritocracy and destroys our established institutions,” said Ali Babacan, a former finance minister in Mr Erdogan’s government who now heads his own party.

Ahmet Davutoglu, another former ally of the Turkish president who has formed a separate breakaway movement, said that the government was “trying to solve a problem with a car’s engine by changing the tyres.”