Climate change threatens not only fires, drought and surging seas but profound risks to the financial system, a federal advisory panel has warned in a first-of-its-kind report from a Wall Street regulator.

The finding was published on Wednesday by a special climate subcommittee to the Commodity Futures Trading Commission, which has oversight for the US futures and swaps markets. The body reached outside its turf to recommend changes in corporate disclosure, investments and central bank asset purchases, the domain of other federal agencies.

Under President Donald Trump, the White House has dismantled policies to control greenhouse gases, the main contributor to global warming. His Department of Labor has sought to restrict pension administrators’ freedom to select investments on environmental, social and governance grounds.

At the same time, investors have called on US regulators to address climate change as a systemic financial risk.

The subcommittee’s report was the first from a government entity to examine the threats that a changing climate posed to US financial stability, said Rostin Behnam, the CFTC commissioner who convened the group.

Climate change poses serious emerging risks to the US financial system, and [regulators] should move urgently

Members included delegates of banks such as Citigroup and JPMorgan Chase, fund managers such as Allianz Global Investors and Vanguard, commodities and energy companies such as Cargill and ConocoPhillips, and environmental organisations. Their findings were unanimous.

“The central message of this report is that US financial regulators must recognise that climate change poses serious emerging risks to the US financial system, and they should move urgently and decisively to measure, understand, and address these risks,” the committee said.

It suggested that financial markets had not accurately accounted for the risks of physical damage from climate change or the costs of switching to an energy system that led to lower emissions.

The subcommittee agreed with most economists that putting a price on carbon would be the most efficient way to curtail greenhouse gases, while acknowledging that this must be done by lawmakers, not regulators.

“Financial markets today are not pricing climate risk. The financial markets cannot do that on their own. Until this fundamental flaw is fixed, capital will flow in the wrong direction,” wrote Bob Litterman, a former Goldman Sachs executive who chaired the subcommittee.

It suggested reforms to derivatives markets, for example by developing new contracts to hedge climate-related risks. The most heavily traded US commodity futures contract today is for West Texas Intermediate crude oil, a fossil fuel that releases carbon dioxide when it is refined and burnt.

The subcommittee also offered ideas that ranged outside the CFTC’s jurisdiction. Regulators should update the Securities and Exchange Commission’s guidance on climate risk disclosure to improve consistency among listed companies, the subcommittee said. Contrary to the Department of Labor, the subcommittee said climate-related factors may be considered along with traditional financial considerations in pension investments.

Climate risks have had a wider hearing outside the US, notably at the Bank of England, the European Central Bank and through the Network of Central Banks and Supervisors for Greening the Financial System, where the US is not a member.

“International engagement by the United States could be significantly more robust,” the report said. 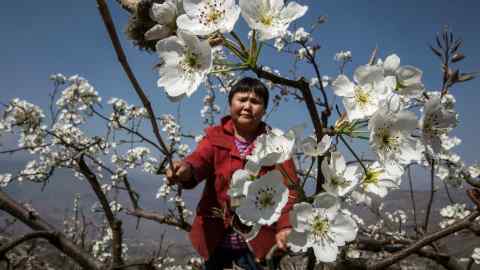 The CFTC’s three Republican and two Democratic commissioners, all of whom were nominated by Mr Trump, voted unanimously to form the climate subcommittee last year.

“Beyond their physical devastation and tragic loss of human life and livelihood, escalating weather events also pose significant challenges to our financial system and our ability to sustain long-term economic growth,” said Mr Behnam, a Democrat.

Heath Tarbert, the CFTC chairman who is a Republican, sounded a hesitant note. “The subcommittee’s report acknowledges that ‘transition risks’ of a green economy could be just as disruptive to our financial system as the possible physical manifestations of climate change, and that moving too fast too soon could be just as disorderly as doing too little too late,” he said. “This underscores why it is so important for policymakers to get this right.”

The subcommittee’s recommendations are not binding. However, Nathaniel Keohane, senior vice-president for climate at the Environmental Defense Fund who served on the subcommittee, said the findings of the report could be central to discussions over the appointment of new commissioners at the CFTC and SEC, who must be confirmed by the US Senate.

Previous PostAT&T Stock: Value On The One Side, Head-Scratching On The Other (NYSE:T)Next PostSE: Unemployment Drops to 4% If There's a Vaccine, Says Ryding