The ongoing decline in U.S. real interest rates suggests that emerging market currencies should continue to outperform in total return terms. With this in mind we remain bullish on the WisdomTree Emerging Currency ETF (CEW). After turning bullish on April 2 the index has risen 7% and we believe the rally may be just getting started given the strong gains seen in inflation-sensitive assets in recent weeks.

The CEW ETF offers a roughly equal balance of the TWD, CLP, PLN, MYR, KRW, MXN, CNY, INR, BRL, TRY, and ZAR. Compared to other ETFs seeking to track emerging market currencies, the fund is by far the most diversified, both geographically (having exposure to Latin America, Asia, and Emerging Europe and Africa) and economically (comprising of both net commodity importers and exporters as well as net debtor and net credit nations). The fund also focuses specifically on currencies rather than gaining exposure to EM FX via local currency bonds or stocks.

We noted back at the height of the selloff on April 2 that the weakness in the CEW basket had come despite a rise in bond yields across emerging markets relative to the U.S. which far exceeded differentials in inflation expectations. This hugely supportive dynamic for EM FX remains in place. The chart below shows 10-year inflation-linked bond yields (nominal bond yields less long-term inflation expectations) for the CEW members for which data is available (Korea, Chile, Mexico, South Africa, Brazil, and Turkey) relative to the U.S. The spread remains near its highs at a substantial 3.4% thanks to the ongoing decline in U.S. real yields amid the Fed and Treasury’s all-out easing policies.

READ ALSO  The Best And Worst Large-Cap Stocks To Buy 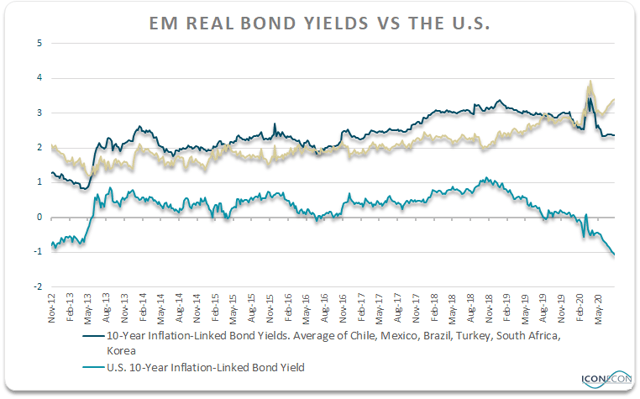 EM FX May Follow Gold Higher As A Store Of Value

The main beneficiary of the collapse in U.S. real interest rates has been precious metals, with gold’s rise almost a mirror image of the decline in U.S. 10-year. However, emerging market currencies offer an attractive alternative to gold as a store of value. Gold prices have tended to be highly positively correlated with the performance of the CEW when adding in interest rate returns. The following chart shows just how far gold has rallied in excess of EM FX based on historical trends and we see potential for EM FX to follow gold’s lead and head considerably higher.

EM FX Is Extremely Cheap Based On Historical Correlation With Gold 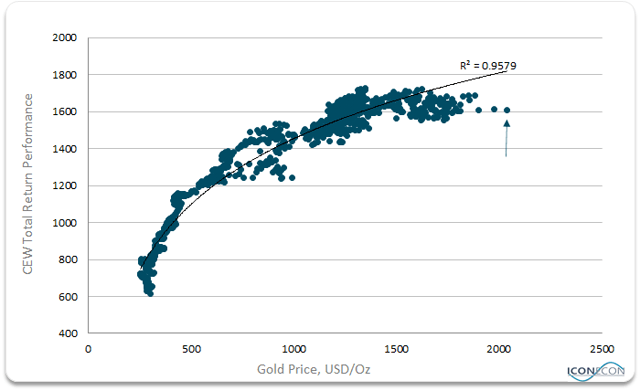 Typically in the case of EM currencies, high real yields of the likes we see today reflect the fact that investors require high returns to compensate for the risk. This was clearly the case during the height of the dollar surge in March which saw EM real yields spike in line with credit default swaps. However, while real yields have remained elevated, and in fact have risen relative to the U.S., EM CDS spreads have continued to decline. This indicates increased risk appetite towards emerging markets which we do not think is yet priced into emerging currencies and in particular the CEW.

Yuan Looks Set To Join In The EM FX Rally

In our previous CEW update on June 1 (‘EM FX: Remaining Bullish On CEW‘) we noted the risk posed by a potential weakening of the Chinese yuan, given China’s importance for emerging economies globally. An escalation of the U.S. – China trade war and efforts to reorganize supply chains away from China remain risks. However, with 10-year bond yields reflecting a sharp decoupling in monetary policy stances between the Fed and the PBOC, we think the risks are tilted in favor of yuan strength, not weakness. 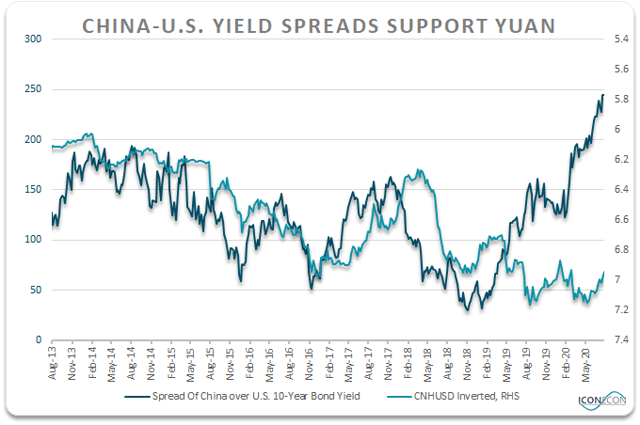 Disclosure: I am/we are long CEW. I wrote this article myself, and it expresses my own opinions. I am not receiving compensation for it (other than from Seeking Alpha). I have no business relationship with any company whose stock is mentioned in this article.