Three of the world’s top central bankers predicted the breakthrough on a coronavirus vaccine would lift the uncertainty weighing on the global economy, while calling for more short-term public support to bridge the gap to a recovery.

Jay Powell, chair of the US Federal Reserve, said this week’s vaccine breakthrough was “certainly good and welcome news for the medium term”. But he warned that “significant challenges and uncertainties remain” on its timing, production, distribution and efficacy.

“From our standpoint it’s just too soon to assess with any confidence the implications of the news for the path of the economy,” Mr Powell said at the ECB’s annual forum on central banking, which is being held online for the first time this year.

“The next few months could be challenging,” he added.

The global economic outlook received a big boost this week when Pfizer and Germany’s BioNTech said the vaccine they are jointly developing had proved 90 per cent effective in tests and could be approved for production this year.

We’re recovering, but to a different economy

Christine Lagarde, president of the ECB, said: “We are clearly seeing a little less uncertainty on several fronts,” mentioning Joe Biden’s election as US president and “the fact that Brexit is progressing” as positive factors along with the development of the vaccine.

However, the ECB president said one of her biggest fears was that Denmark’s plan to cull its entire mink population to stop the spread of a mutated form of coronavirus showed it could be transmitted from animals back to humans and meant a vaccine “may not work”.

The pandemic had created a “big river of uncertainty”, Ms Lagarde said. She said it was “critically important” that both fiscal and monetary policies that “have been extremely helpful” should “bridge over to the other side of the river and continue to support the economy so there is as little lasting damage as possible”.

Bank of England governor Andrew Bailey echoed her cautious optimism about the vaccine. “It’s good news obviously, it’s encouraging and we need encouraging signs but it is true that it is . . . not here yet in terms of the implementation of it.” He added that the development of a vaccine was in line with BoE expectations for an improved health scenario next year.

At an earlier FT Global Boardroom event Mr Bailey said the vaccine breakthrough strengthened the central bank’s view that the long-term restructuring needed after the pandemic will be more modest than in the 1980s or 1990s. The BoE expects UK output to recover and regain pre-pandemic levels only in the first half of 2022.

Mr Powell also stressed that the economy was likely to be fundamentally transformed by the pandemic to be more reliant on technology and automation, which would disproportionately hit lower-paid workers in the service sector.

“We’re recovering, but to a different economy,” Mr Powell said. “There’s going to be a substantial number of workers who are going to need support as they find their way in the post-pandemic economy, because it’s going to be different in fundamental ways.” 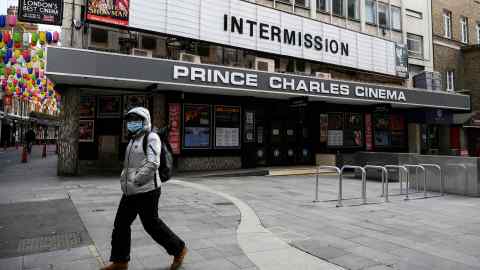 The US job market continues to improve despite the rising Covid-19 infection rate. First-time applications for unemployment benefits in the US fell to 709,000 last week, the labour department said on Thursday. Economists had expected claims of 735,000 in the week ending November 7, according to a Thomson Reuters survey.

Ms Lagarde said banks had “operated as facilitators as opposed to being the source of the problems” during the 2008 crash, but she warned there was still likely to be a rise in non-performing loans once governments start winding down their support for companies and called on lenders to quickly deal with problems in their loan portfolios.