Celanese: Access To Plenty Of Liquidity Will Ensure Survival (NYSE:CE)

In November 2019, I was in awe of Celanese Corp.’s (CE) combination of dividends and stock repurchases, as I agreed buying back its own stock is the best possible capital allocation if no affordable bolt-on acquisitions could be found. Fast forward to 2020 and the COVID-19 pandemic. Celanese had a tough first quarter as the demand for its products from Chinese users dropped dramatically, and although China appears to be doing better, the company’s second quarter will now very likely include the negative performance in the rest of the world.

Q1 was focusing on damage control

With Celanese’s exposure to China and the Chinese industry levels reaching lows in the first quarter, the company’s revenue drop from $1.69 billion to $1.46 billion didn’t really come as a surprise and it went into damage control mode. The COGS decreased by $122 million as well, but unfortunately, the company had to deal with a $5 million increase in SG&A expenses, which increased to $125 million. 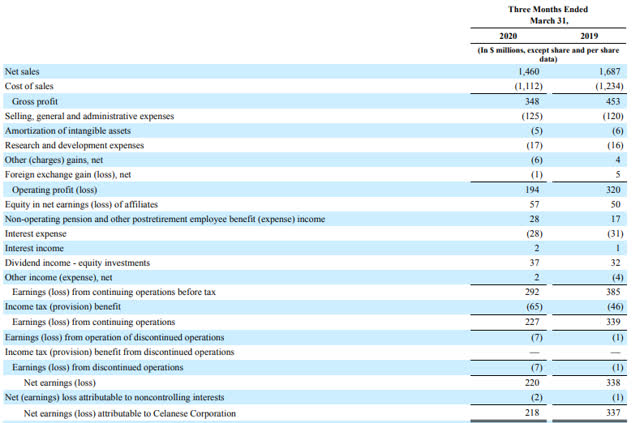 This caused the operating profit to come in at $194 million, roughly 40% lower than the $320 million in operating profit generated in the first quarter of 2019. Fortunately, Celanese was able to record a higher income from affiliated companies and reported a higher dividend income, while the net interest expense decreased from $30 million to $26 million in the first quarter. These are obviously only small improvements, and the pre-tax income of $292 million was still approximately 30% lower than the $385 million in Q1 2019. The net income came in at $218 million, compared to $337 million in the first quarter of last year. This resulted in an EPS of $1.83 per share ($1.89 EPS from continuing operations), which is only 30% lower than the EPS in Q1 2019, thanks to Celanese’s 6% lower share count, as the average number of shares outstanding decreased from 127.5 million in Q1 2019 to 119.3 million in Q1 2020. That’s the weighted average throughout the quarter, and as Celanese continued to spend cash on buying back stock, its share count decreased further to 118.2 million shares as of April 21st.

Indeed, looking at the company’s cash flow statement, the majority of the cash outflow was spent on share buybacks. 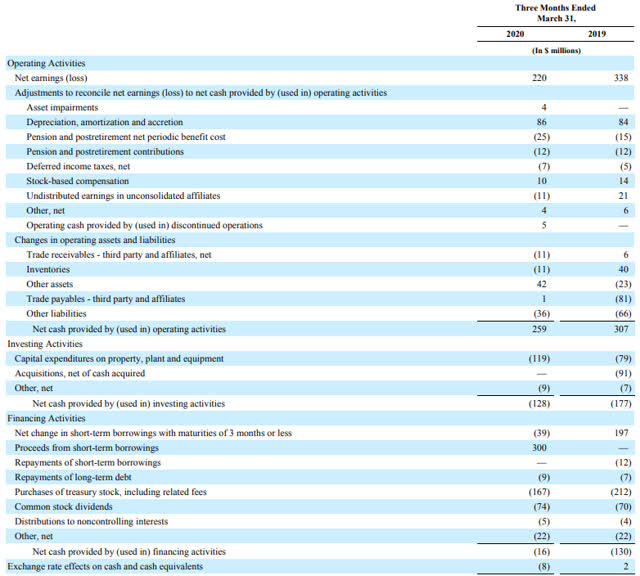 The capex was $119 million, which resulted in Celanese reporting an adjusted free cash flow of approximately $150 million in Q1 2020. It’s great to see a positive free cash flow, but due to the lower operating cash flow and higher capex, the free cash flow was approximately 50% lower than in the same quarter last year. That being said, the full-year capex guidance is just $350 million (decreased from $500 million), which means Celanese will spend just $230 million in Q2-4 of this year, which works out to be less than $80 million per quarter.

That’s disappointing, and although the dividend is fully covered (the current share count will result in a dividend-related quarterly outflow of $73 million), it’s clear Celanese can no longer afford to spend too much money on stock buybacks (as it already overspent in Q1). That being said, the average repurchase price was less than $88/share, so in the long run, these buybacks should be accretive.

This means I don’t have a problem with overspending on share buybacks in Q1 as long as it doesn’t jeopardize the company’s long-term future. Fortunately, the management team seems to agree with me, as it confirmed it will keep the cash dividend (as this will cost less than $300 million per year) but will only spend cash on share repurchases when the company can afford to do so.

As of the end of Q1, Celanese had a working capital position of just over $900 million with in excess of $500 million in cash and a gross debt of $4.1 billion for a net debt of $3.6 billion. That should be fine, as Celanese can still draw down approximately $1 billion from its revolving credit facility (the company borrowed $247 million from the $1.25 billion credit facility. Considering the cost of debt of the credit facility is quite low (1.25% above LIBOR and EURIBOR), the credit facility could offer an interesting way to repay the $400 million in senior notes maturing in 2021. Those notes have a 5.875% coupon and are the most expensive debt on the balance sheet.

The entire chemical sector went through a rough patch during the COVID-19 outbreak, but it looks like Celanese seems to get through it relatively unharmed. Sure, 2020 will be a lost year, but even with near-term debt maturities in 2021 and 2022, the company’s total liquidity of $1.5 billion (cash on hand + undrawn credit facility) should be sufficient.

All bonds are trading above par, and the YTM for the 3.5% 2024 bond right now is around 1.8% (after reaching a YTM of around 6% during the darkest days in March), indicating the bond market isn’t worried about Celanese at all. I currently have no position in Celanese, as I decided in March to average down on Solvay (OTCQX:SOLVY, OTCQX:SVYSF) in the chemical sector, but I am looking forward to seeing Celanese’s Q2 results.