The US is heading for the toughest three months in its public health history, the head of the country’s public health organisation has warned, with officials braced for another surge in coronavirus cases and hospitalisations following last week’s Thanksgiving holiday.

Robert Redfield, the director of the Centers for Disease Control and Prevention, or CDC, said at a US Chamber of Commerce event on Wednesday he thought this winter would be particularly difficult given already high infection rates across the country.

While the US is expected to approve a vaccine in the coming weeks, it will not be universally available until next summer.

“The reality is that December, January and February are going to be the most difficult time in the public health history of this nation, largely because of the stress that it is going to put on our healthcare system,” Dr Redfield said.

The warning comes as US coronavirus cases, hospitalisations and deaths have all soared in recent weeks, with more than 1m people being diagnosed with the disease every week in November.

Even if only a small percentage of those people were carrying the disease and passed it on to other people, that can translate into hundreds of thousands of additional infections

Hospitalisations have more than doubled since the end of October to reach a record 98,691. On Tuesday the US reported 2,473 deaths and 176,751 new cases, according to Covid Tracking Project data. That was the biggest one-day jump in deaths since May 7 and among the largest increases of the entire pandemic. California, Texas and Florida — the three most populous US states — have each registered more than 1m cases apiece.

Dr Redfield said hospitals were already overstretched given the high rates of infection spreading rapidly across much of the country. With virtually every region affected, there are fewer places with available healthcare resources and staff that can be shifted to hotspots, he said.

Officials expect another rise in cases within the next few days because so many people ignored official advice not to travel over Thanksgiving.

“Travel volume was high over Thanksgiving,” Cindy Friedman, chief of the travellers’ health branch at CDC, told reporters on Wednesday. “Even if only a small percentage of those people were carrying the disease and passed it on to other people, that can translate into hundreds of thousands of additional infections.”

CDC is urging people not to travel for Christmas — and for those who do, the agency recommends they should get a Covid-19 test between one and three days before travelling, and again between three and five days after. They also recommend that people avoid non-essential activities for the week after travelling.

Meanwhile, CDC has also relaxed its guidelines around how long people have to remain in quarantine if they come into contact with an infected person. 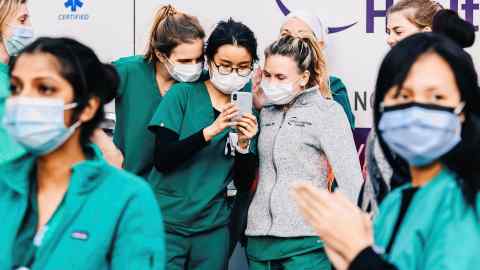 Instead of remaining at home for 14 days, anyone exposed to the disease can now leave quarantine after 10 days if they have no symptoms, or even seven days if they also test negative for the disease.

A CDC official said: “If you reduce the burden a little bit, accepting that it comes at a small cost, we may get a greater compliance overall with people completing a full seven days. If we get full compliance overall that will result in fewer infections.”

Officials have calculated the risk of someone infecting another person even after completing a 10-day quarantine period at 1 per cent, and the risk of doing so after seven days at 5 per cent.