CD Projekt: Not For The Faint Of Heart (OTCMKTS:OTGLF)

CD Projekt (OTCPK:OTGLY) (OTCPK:OTGLF) is a game development and publishing company; its main current product is The Witcher game series, regarded by most as one of the best games of the decade. Its new game, Cyberpunk 2077 has been in development for seven years and is the key factor for the company’s future. The game is expected to deliver colossal revenue growth during 2021 and probably 2020, and the market estimates the company will flourish with its success, especially in the long term.

I detailed how important Cyberpunk 2077 is for the industry and its long-term prospects in a previous article. Since then, there have been many developments, including a short delay of the launch date of Cyberpunk 2077 and the launch of a new generation of consoles from Microsoft (MSFT) and Sony (SNE).

Getting the stock presents a low-risk, high-reward proposition in the long term. However, there is a lot of uncertainty in the short term, and getting the stock now is not for the faint of heart. For better or worse, the uncertainty will reduce significantly in the next few days when the game launches or announces another delay.

Will it launch this year and other risks

The game’s recent delay was only 21 days, putting the new launch date on December 10th. While such a small delay would normally impact so much the prospects of the game and the stock, this was the third time the company delayed the game this year, and this time the game release date is dangerously close to the holiday season, which is key for the video game industry.

as I’ve said, we have the game ready on the PC, and it plays great on both next-gen consoles. We’re finalizing the process on the current-gen. To be honest, releasing on the 19th was possible as well, but we believe that having these extra three weeks will enable us to get more things ready to our satisfaction. But we’re talking only about technical things at the very final stage (…) We feel – maybe not comfortable [chuckle], but confident and will are releasing on the 10th.” – Adam Kiciński CEO – on the conference call about the delay

The company’s CEO explained that the game is actually playable in the new generations of consoles on the last conference call. Still, performance issues need to be worked on for the current generation of consoles. Ironically, the next-generation version of the game, which will use new features of the consoles and higher computational requirements, is not ready and will be launched sometime next year. Players that purchase the game now will get a free upgrade when the new version is ready.

If it’s delayed, the customers might lose some excitement about the launch and the stock would likely take a serious hit. If it launches a game with several issues, the stock might do better in the short term, but its long-term prospects will be seriously compromised. 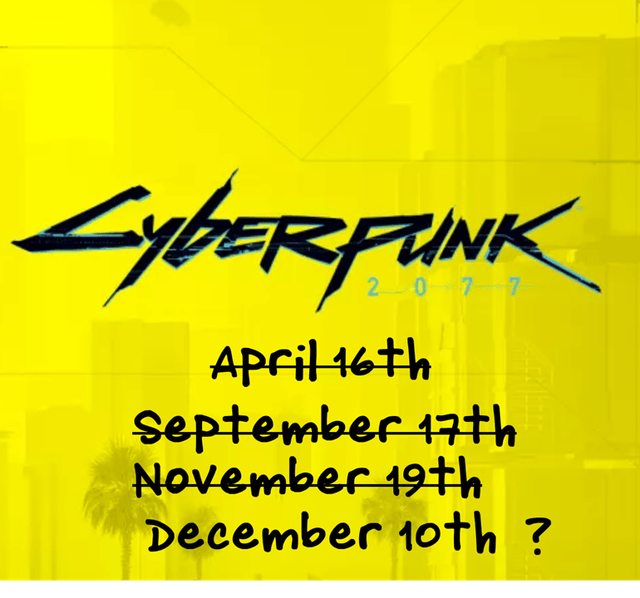 The “Low” scenario of the valuation considers another delay of Cyberpunk, pushing it to 2021. The “Mid” scenario forecasts Cyberpunk releasing with some issues and not meeting expectations. While that scenario might seem pessimistic if the game is not delayed, this scenario should reflect the company’s new bottom of the estimates. These considerations permeate revenue growth, margin, and G&A, and the charts below reflect the information in Polish zloty and dollars, respectively.

These approximations align with the market expectations for CD Projekt in the next couple of years, as the image below shows.

I like to use Peter Lynch’s ratio when valuing a stock. This method uses the ratio between the expected earnings growth plus dividends and the P/E of the stock to determine its fair value. A stock that has a 1:1 ratio is reasonably priced. The higher the number, the more underpriced the stock is. 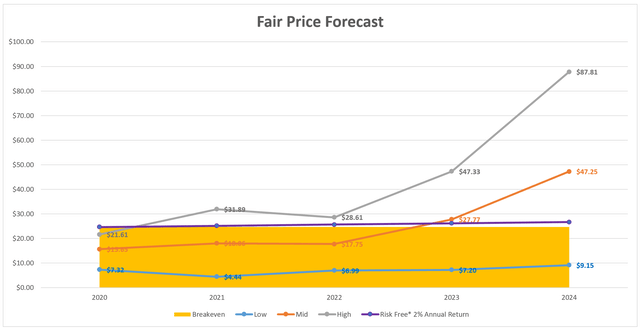 This valuation does not take into account the assets and liabilities of the company. The growth considered in the valuation is the average yearly growth of the next years.

Building an adjusted Beta Pert risk profile for the stock’s fair price, we can calculate the risk profile in the short and long term.

In the short term, the risk profile shows there is an 83% probability that CD Projekt will trade at a lower price than it is today, and the statistical value of the opportunity of investing now is -22.6%.

However, in the long term, there is only an 18% probability that CD Projekt will end up trading at a lower price than it is today, and the statistical value of the opportunity of investing is an impressive 12.2%.

Betting heads on a coin flip, where you will get 100% return if you win, but if you lose, you will lose 100%, has a statistical value of 0%. If someone were to bet an infinite number of coin flips, they would end up with the same money they began. 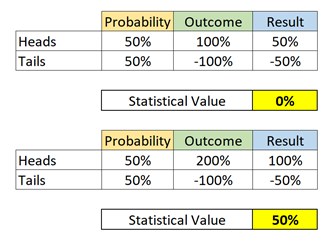 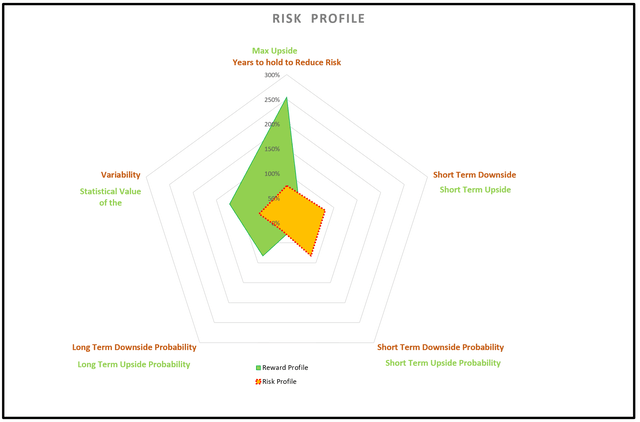 The chart above shows the risk-reward profile of the company. The chart shows that the risk is mostly allocated in the short term, and the reward is significantly stronger than the risk. The risk is not negligible, the stock is overpriced, and it could have a significant downside in the short term, but the long-term upside of the company is so massive it makes the risk look small in comparison.

The delay to December and rumors of upcoming delays are pushing the stock down. This presents an opportunity for bold investors that could get the stock at a relatively depressed price.

While there is a risk of the game actually being delayed again or that it is only playable on the new generation of consoles, the long-term prospects make up for the high risk in the short term.

As we move closer to December 10th, the risk of another delay will fade, and by the end of December, it will be clear if the game will meet expectations in current and next-gen consoles. Risk-averse investors could wait until the launch to get the stock, probably at a premium but with a reduced risk profile, while investors with a higher tolerance for risk or a longer time frame for investors could get the stock now. The right decision to take is the one aligned with your risk profile.

If there is anything in this article you agree or disagree with or would like me to expand further, I would sincerely appreciate you leaving a comment. I will address it as soon as possible.

Disclosure: I am/we are long OTGLY. I wrote this article myself, and it expresses my own opinions. I am not receiving compensation for it (other than from Seeking Alpha). I have no business relationship with any company whose stock is mentioned in this article.