Investing in value stocks is all about risk/reward. The cheaper the respective stock is at any given time; the more potential reward may be in play. Value investors though know better than most that patience is key when investing in beaten up stocks. Companies which are trading well below their historic valuations, for example, are cheap for a reason. Furthermore, many times, the downward trend continues far longer than many suspect.

One such stock which we have written about in the past is The Cato Corporation (NYSE:CATO). We actually wrote about this company back in January of this year when we stated that we felt lower lows were on the cards for the company. We stated in this article that too much cash was being siphoned off to the dividend, and not enough investment was being done to improve the fortunes of the company.

Unfortunately, for Cato, its deteriorating fundamentals (coming into this fiscal year) were then thrown the sucker-punch of the coronavirus pandemic. The share price now (almost 10 months later) is down almost 50% since we penned that piece. Shares are now trading just above $8.20 per share, and the dividend has been suspended.

If we look at the daily chart below, however, we see that shares may have finally found some type of meaningful support. We state this because shares bottomed in August and then successfully tested this bottom in late October. Since then, buying volume has been on the increase, which is encouraging. This brings a potential double bottom reversal pattern in play. To confirm the pattern, shares will need to take out the September highs (approximately $9 a share). A rough target would be $12 a share, which is approximately 45% above where shares are trading at present. 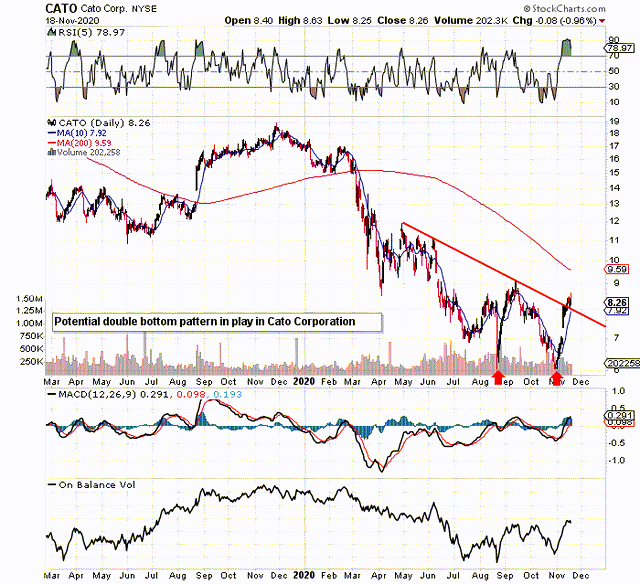 If indeed Cato can recover the $12 level, for example, we should be seeing some signs of life in the financials. In the most recent second quarter, for example, the company reported a net loss of $7.2 million on top-line sales of $166.3 million. This means sales are down roughly 40% over the first six months of this fiscal year. Net income for the first six months comes in at -$35.6 million.

These massive swings on the income statement (compared to last year) are what happen when stores get closed on-mass (which occurred in March of this year). Obviously, the lack of positive earnings will be a bone of contention among value investors. Operating cash/flow also (if we look at a trailing twelve-month average) comes in negative at -$40 million. Nevertheless, the two most important valuation metrics, in our opinion, are the book multiple (0.7) and the sales multiple (0.3). Why? Because it is precisely assets and sales which invariably generate earnings and, consequently, share price growth for a company. Suffice it to say, as long as the balance sheet can be protected, earnings growth should eventually return.

If we zone into the second quarter, it is possible that green shoots may be forming. Although the company posted a net loss of $7.2 million, it was able to generate $23.1 million of operating cash flow. On top of this number, $14 million was generated from its investing activities. This positive cash enabled the firm pay down $30 million from its line of credit and add $7 million to its cash balance. Cash & ST investments stood at $137 million at the end of second quarter. Although this number has been declining, remember the market cap of Cato at present is approximately $198 million. Suffice it to say, excluding the property the company presently owns, Cato’s cash balance makes up 69% of the present market price of the firm. Not a bad position to be in.

Furthermore, the company opened 36 new stores in Q2, which should demonstrate to investors the company’s long-term vision for the firm. Equity at the firm came in at $266 million at the end of the second quarter. Yes, book value on the balance sheet has been declining, but it only fell by $5.5 million in the quarter. With a bit of luck, we will see an end to this declining trend in the third quarter numbers which are being announced this month.

Therefore, to sum up, Cato Corporation is expected to announced its second quarter numbers later this month. Shares have lost more than half their value this year, but Q3 numbers may finally confirm a hard bottom here. Around the $9 level would be our buying zone. Remember, price action is predictive in nature, meaning it has already incorporated the salary and cost cutting initiatives into the price. Let’s see what Q3 numbers bring.

Disclosure: I/we have no positions in any stocks mentioned, but may initiate a long position in CATO over the next 72 hours. I wrote this article myself, and it expresses my own opinions. I am not receiving compensation for it (other than from Seeking Alpha). I have no business relationship with any company whose stock is mentioned in this article.

READ ALSO  The Next Decade Could Be Even Worse