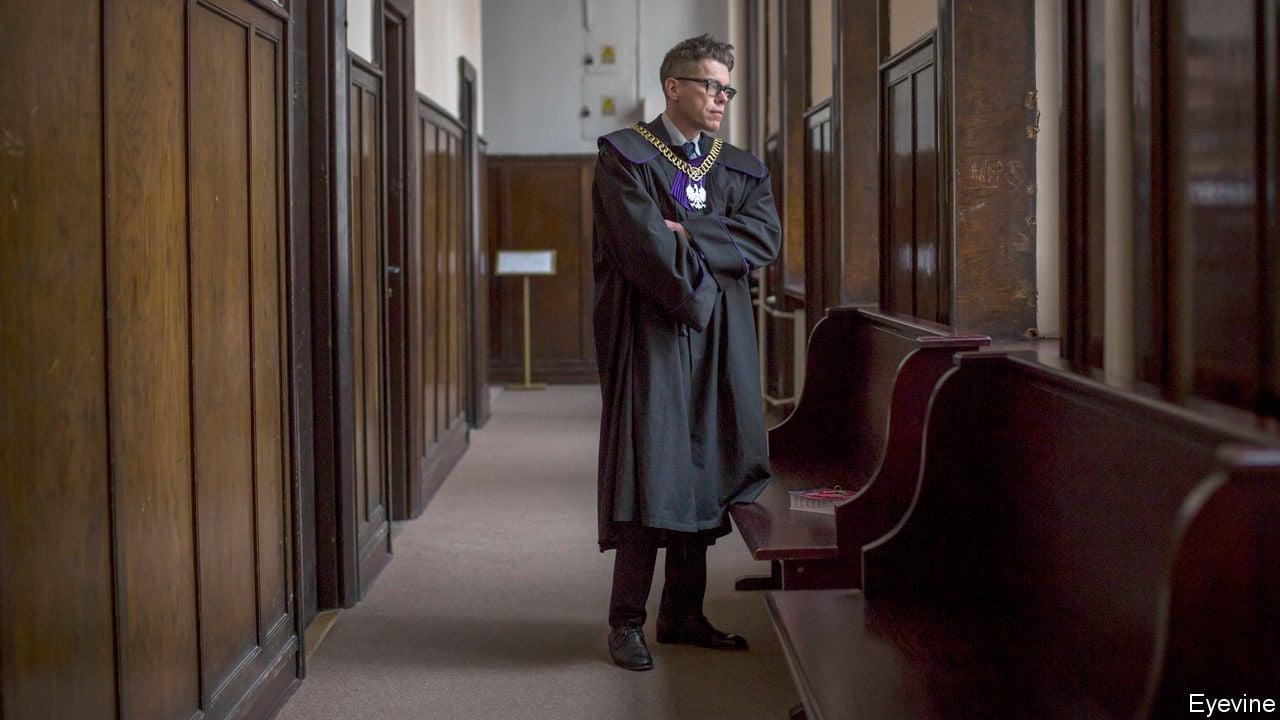 THE CASE AGAINST Igor Tuleya, a judge in Warsaw, is mysterious. Poland’s justice ministry wants to prosecute him for letting spectators and reporters attend a hearing in 2016 on whether the governing Law and Justice (PiS) party violated quorum rules in parliament. That seems odd: under Polish law judges have the right to decide whom to allow into their courtrooms.

The real reason for PiS’s anger is that Mr Tuleya impeded its judicial reforms, which give the government greater power over judges, by querying them at the European Court of Justice (ECJ). A new government-appointed disciplinary chamber is considering whether to lift his immunity. The decision, first scheduled for March 20th, has been postponed by the covid-19 emergency, but if Mr Tuleya loses his immunity he could face three years in jail.

Punishing judges for politically incorrect rulings sounds like something out of an authoritarian dictatorship. Poland’s government is indeed trying systematically to subdue the judiciary. According to a report by Iustitia, an independent judges’ organisation, 60 judges have faced various kinds of repression since 2017, when PiS established the disciplinary chamber. Their transgressions ranged from criticising court reforms to upholding the right of anti-government activists to demonstrate. Some judges were subjected to waves of online smears and threats, secretly organised by a deputy minister of justice. (He resigned after the press found him out, while denying any wrongdoing.)

“Polish judges are facing prison for defending European Union law,” says Pawel Juszczyszyn, another judge who ran afoul of the disciplinary chamber. His offence was to request an opinion from the ECJ, which has ruled that the Polish reforms violate the EU treaty by giving parliament control over the body that picks new judges. Mr Juszczyszyn asked the ECJ whether that meant that these judges were illegitimate. A new law, dubbed the “Muzzle Law”, makes such queries a criminal offence. In February he was suspended indefinitely and docked 40% of his pay.

When a state undermines the independence of its judiciary, corruption tends to follow. There are signs of this in Poland. Since PiS came to power in 2015 the country has slipped from 29th to 41st in Transparency International’s corruption-perceptions index. In September media reports said that Marian Banas, the senior government auditor, had rented a house to a brothel; he rejects the allegations, and has refused to resign. In 2018 the head of the financial authority quit after recordings seemed to show him demanding a bribe.

A second worry is that other European countries will disregard Polish courts if they are deemed to be subject to political influence. On March 10th a German court refused to extradite a suspect to Poland, ruling that its judicial reforms meant he could not be sure of a fair trial there. In February Norway cancelled some 70m ($75m) in assistance to Polish courts, saying “basic European legal standards are no longer present”. Such rifts could ultimately split Poland off from European law.

Poland’s judges hope the EU can prevent that. The European Commission has gone to the ECJ to challenge the legality of the disciplinary chamber that punishes judges, and has asked the court to suspend it while the case is pending. A decision is expected soon. Many in Brussels understand the threat: last month Vera Jourova, the commissioner for transparency, said Poland was “carpet bombing” its judiciary rather than reforming it. But time is short. The president of the Supreme Court has resisted efforts to undercut judicial independence throughout her term, but she will be replaced by PiS in May. By the time the EU acts, Poland’s courts may already, in effect, be under government control.