CAN will see continued strong demand for its Bitcoin mining machines due to the continued price rise of Bitcoin, but its AI chip business awaits a new chip before it has a chance to contribute meaningfully to revenue.

I’m cautiously Bullish on CAN due to the continued strong rise in the value of Bitcoin and its effect on miner demand for new machines.

Huangzhou, China-based Canaan was founded in 2013 with an initial focus on developing ASIC applications for Bitcoin mining under the brand Avalon Miner and has since expanded its portfolio with the Kendryte K210 chip.

Management is headed by founder and CEO Nangeng Zhang, who was previously an assistant researcher at the Beijing Remote Sensing and Communication Technology Institution.

Kendryte K210, also referred to as ‘Kendryte AI’ is an Artificial Intelligence [AI] edge computing chip based on the Risk-V open-source hardware instruction set architecture that has been backed by companies like Alibaba (BABA), Google (GOOG), Samsung (KRX:005930), Qualcomm (QCOM), and Antmicro.

Most of its revenue comes from its legacy Bitcoin mining chip segment, while management is seeking to diversify away from the highly cyclical nature of the Bitcoin mining space into other adjacent areas, such as edge AI processors.

According to a 2018 market research report by Technavio, the global cryptocurrency mining hardware market is projected to grow over $2.2 billion by 2022, representing a CAGR of 10% between 2018 and 2022.

Management says that in 2017 the ASIC hardware segment held the largest market share of 74% of the market and is projected to dominate the industry during the period, decreasing by only 3% through 2022, according to a Frost & Sullivan report.

Due to rapid IoT and 5G technology development, it is expected that the combined edge AI chips and cloud AI chips markets will grow at a CAGR of about 45.1% between 2018 and 2023.

Topline revenue by quarter has varied significantly in the quarters since the firm’s U.S. public debut: 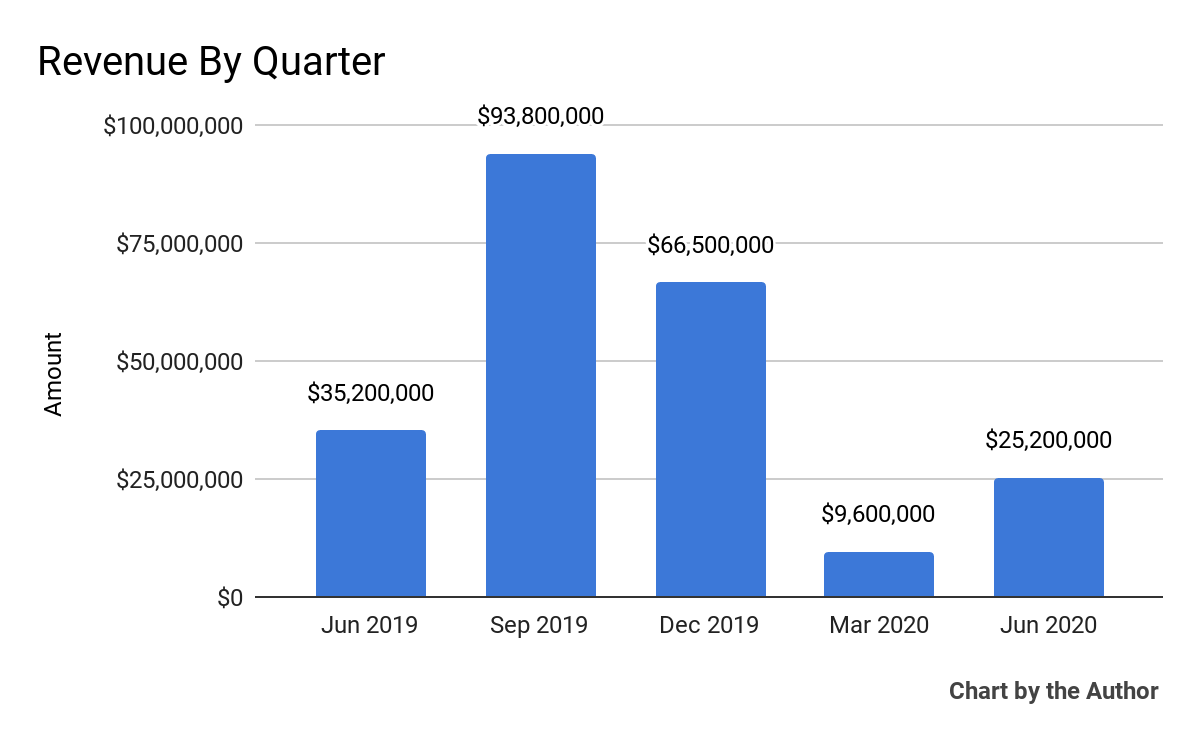 Gross profit by quarter has fluctuated sharply over the past five quarters: 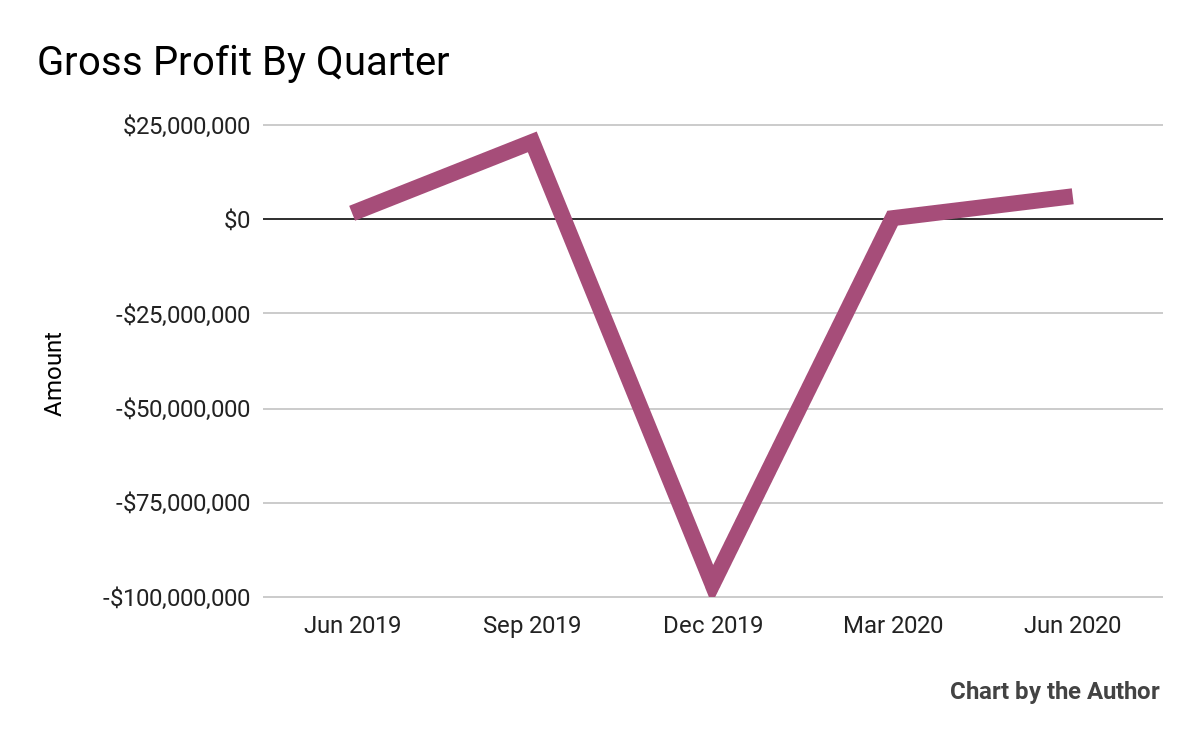 Operating income by quarter has approached breakeven in the most recent reporting period of Q2 2020: 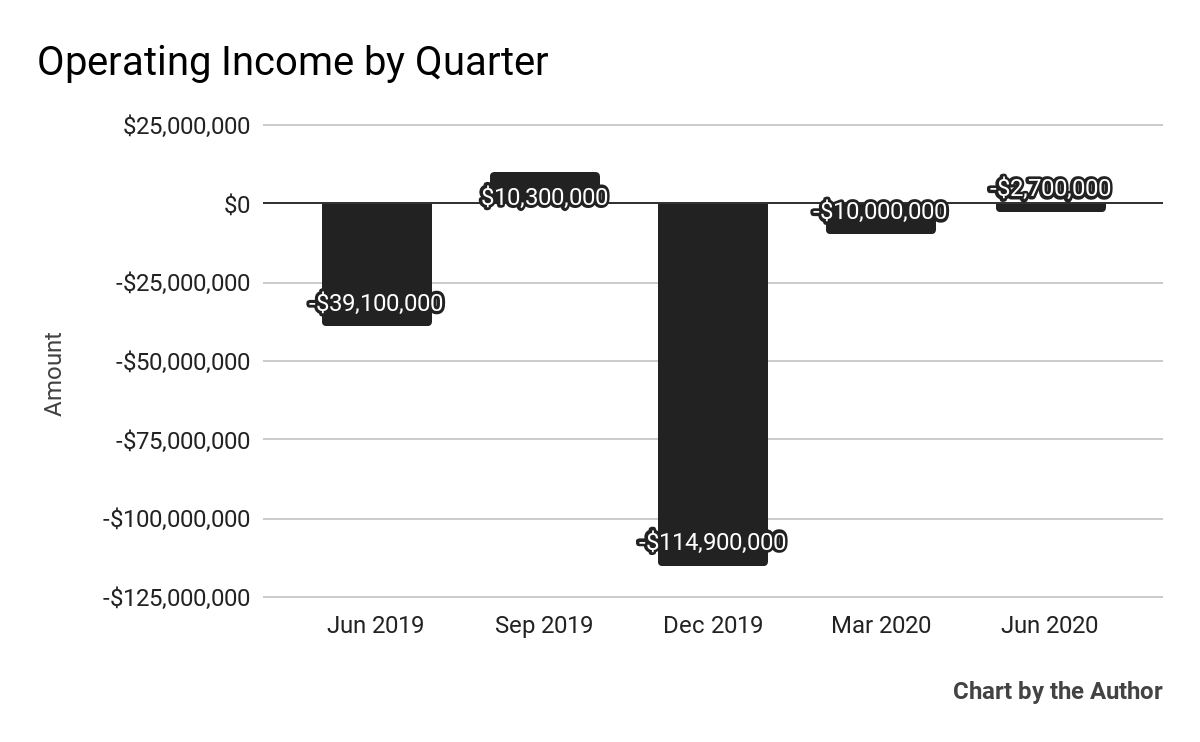 Earnings per share (Diluted) have also approached breakeven for Q2 2020: 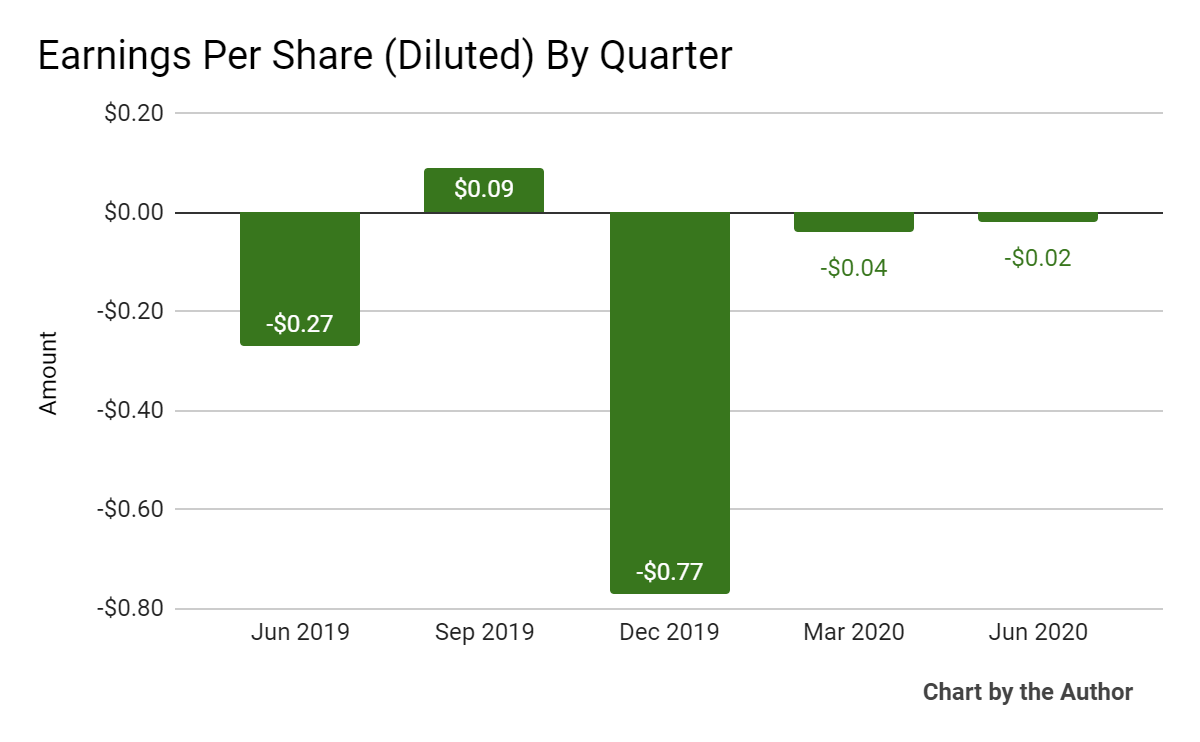 In the past 12 months, Canaan’s stock price has dropped 62 percent vs. the U.S. Tech index’ rise of 73.3 percent and the overall U.S. market’s growth of 19.8 percent, as the chart below indicates: 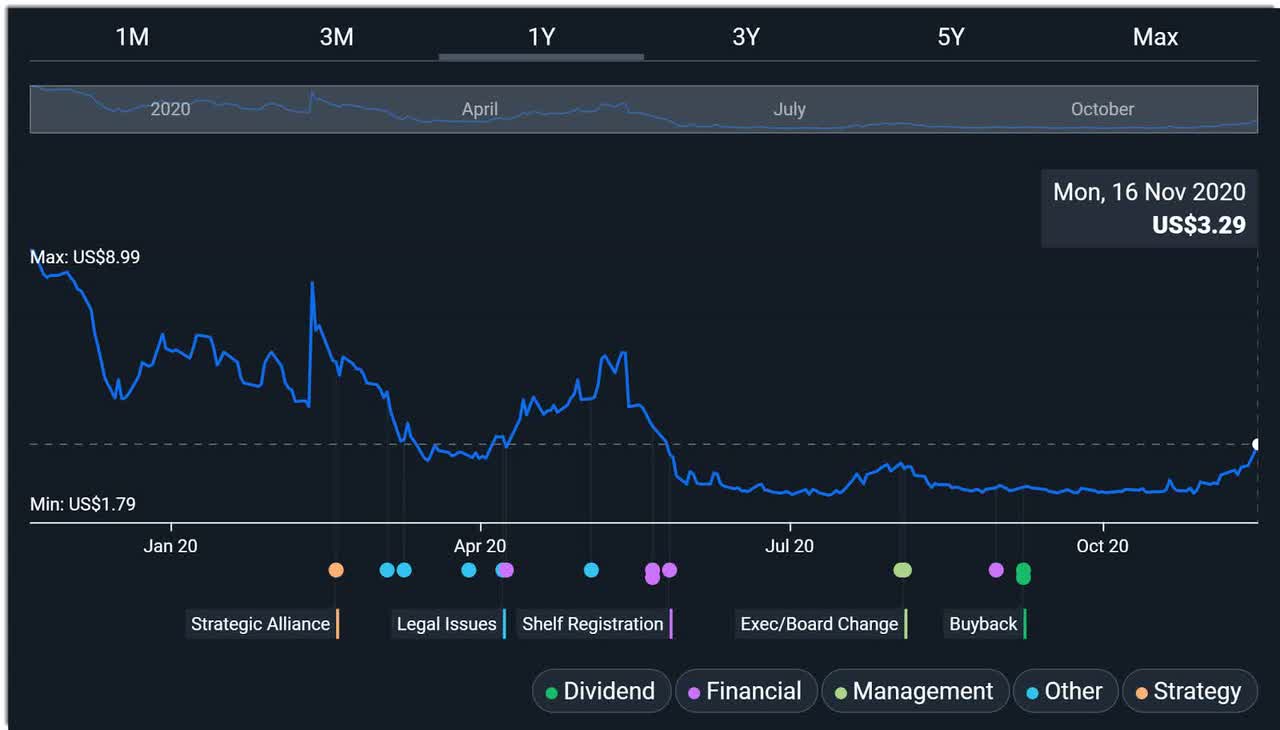 Below is a table of relevant capitalization and valuation figures for the company:

As a reference, a relevant public comparable to Canaan would be Ebang International (EBON); shown below is a comparison of their primary valuation metrics:

In its last earnings call, covering Q2 2020’s results, management highlighted the rise in the price of Bitcoin (BTC-USD) which translated into increasing profitability for miners and thereby increasing demand for machines with the firm’s processors installed.

Also, the advent of the rainy season in China, which causes miners to physically move their equipment to take advantage of lower cost hydropower electricity, also results in improved profitability and increasing demand.

As a consequence, the firm sold out of its Bitcoin machines and began accepting pre-orders for deliveries in Q4 2020 and Q1 2021.

Canaan’s CEO also highlighted its continuing R&D efforts to improve chip performance, although many industry observers believe most of the performance gains have already been obtained by chip makers such as Canaan and that further performance improvements will be of a lesser degree.

Its AI product segment saw some customer gains during the quarter for various edge use cases as management continues to pursue the goal of creating an open source AI application platform to enhance the value of its processor capabilities.

As to its financial results, Q2 2020 resulted in strong sequential topline revenue growth over Q1 as well as sharply reduced operating losses.

Some of the operating cost reductions were due to lower R&D material costs.

Canaan ended Q2 with about $75 million in cash and equivalents.

Since the end of Q2 2020, the price of Bitcoin has risen dramatically, thus increasing the profitability of miners, despite the increase in mining difficulty.

While Canaan’s Bitcoin business will likely benefit from Bitcoin’s price rise and miner demand, the firm’s narrative has been its desire to diversify into AI edge computing chips.

Management has provided nothing in the way of detail (that I can find) in terms of revenue for the AI segment.

Instead, the CEO said ‘We are working around the clock to develop our next generation AI chip, the K510.’

So, it appears its existing AI chip is likely not performing in the marketplace the way management wants.

For now, we’ll likely see an increase in demand for its Bitcoin mining machines but no significant revenue increase from its AI segment.

I’m cautiously Bullish on the stock price as a function of overall bullishness on the price of Bitcoin as it appears to be well into a strong runup in price.

Members of IPO Edge get the latest IPO research, news, and industry analysis.

Get started with a free trial!

Previous PostNATO’s Stoltenberg claims US withdrawal from Afghanistan will turn it into terrorist hotbed, warns of ‘attacks on our homelands’Next PostSecretive Club For Ultra-Wealthy Environmentalists Revealed