Can you put a number on it? How to understand the world

How far can common sense take us in the field of statistics? At first glance, not very.

The discipline may be vital but it is also highly technical, and full of pitfalls and counterintuitions. Statistics can feel like numerical alchemy, incomprehensible to muggles — black magic, even. No wonder that, as I described last week, the most popular book on the topic, How to Lie with Statistics, is a warning about disinformation from start to finish.

This won’t do. If we are willing to go with our brains rather than with our guts, any of us can think clearly about the world by using statistics. And since much of the world — from US electoral polling data to the spread of Sars-Cov-2 to the hope of economic recovery — can most reliably be perceived through a statistical lens, that is just as well.

A useful first step is to find out what exactly the numbers are measuring. Statisticians are sometimes dismissed as “bean counters”, but most of the things in the world that we might want to count are more ambiguous than beans. For example: some studies suggest that playing violent video games causes violent behaviour.

There is no jargon here. All we need is some curiosity about what lies behind the numbers’

Before you leap to amplify — or deny — that conclusion, ask yourself whether you understand what is being claimed. What is the definition of a violent video game? (Pac-Man devours sentient creatures, which sounds violent. But perhaps the researchers had something a little edgier in mind.)

To move to the question of real-world violence: every time there is a mass shooting in the US, we are reminded that nearly 40,000 people there are killed by guns each year.

It is a shocking number — but few of these deaths occur during mass shootings, and more than half are suicides. The problem is vast and urgent, but it is not necessarily the problem that we assume.

Such questions suggest that the subject of statistics is even more confusing than we thought. Perhaps this is true, but there is nothing particularly technical about the answers. These are questions about the world and the words we use to describe it. There is no jargon here. All we need is some curiosity about what lies behind the numbers. And if we have no curiosity, I am not sure there is a cure for that. 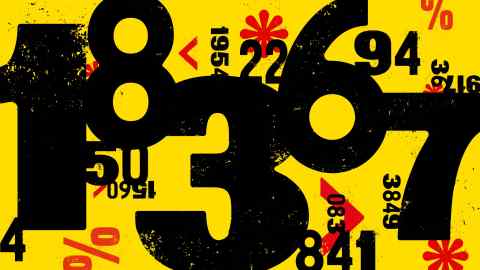 The second step is more fun: faced with a statistical claim, find a way to put it into context. Is it going up or down compared with last week, or last year, or a decade ago? Is it big or small, compared with something more familiar?

Not all such attempts make sense. There is a long history, going back at least to a 1981 speech by President Reagan, of comparing the US national debt to a towering stack of dollar bills. The bigger the debt, the bigger the stack. This may help to create a sense of alarm but it doesn’t do much for clarity.

In 2011, NPR’s “Weekend Edition” tried to illustrate the US national debt by saying, “If you stack up 14.3 trillion dollar bills, the pile would stretch to the moon and back twice.”

That does not help. Indeed, it is triply unhelpful, since most of us lack an intuitive grasp either of how far away the moon is or of how many dollar bills there are to the yard, and even if we had both we would still be stuck with the question of whether $14.3tn was a worryingly large debt or not.

More useful is to think of the debt as a sum per person. At the end of 2019, US federal debt was nearly $23tn, which is about $70,000 per US resident. I don’t know whether that is more or less alarming than trying to measure it out in trips to the moon but it is certainly vastly more informative.

Try the same trick with the UK health secretary Matt Hancock’s summertime claim that the NHS could save £100m in five years if all overweight people lost five pounds. A few seconds with a search engine and a calculator will tell you that this works out as 30 pence per person in the UK per year.

Everyone should familiarise themselves with a few basic facts about the world. If you know the population of the country you live in, or that it is about 3,500 miles from London to New York, you can use these landmarks to orient yourself when encountering a statistic for the first time.

When you meet a strange number, says Matt Parker, the author of Humble Pi, you can use one of these more familiar numbers to make an introduction so that you better understand the stranger. I love that way of putting it, not least because it suggests that every number is a potential friend rather than a traitor waiting to be exposed.

READ ALSO  Inside the rise of the political micro-influencer

I’m all in favour of expertise, including statistical expertise. But in many cases it is neither necessary nor sufficient. There is a lot to be said instead for being curious, asking questions and stopping to think.