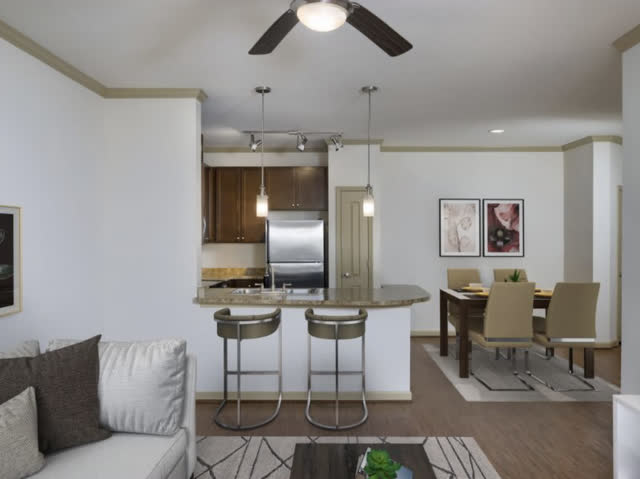 Thus far, I’ve focused on coastal apartment REITs. My preference for these REITs has been based on:

Having covered the CA/urban heavy REITs in-depth, today I will give an overview of the sunbelt and take a look at the valuation of two sunbelt apartment REITs, Mid-America (MAA) and Camden (CPT). The main draw to the sunbelt as most people know is the long-term demand story – decades of strong population growth driven by a lower cost of living, warm weather and a business friendly environment (sometimes zero state income tax). Below is a snapshot of population #s over the past 50 years in a selection of Sunbelt cities. The numbers are simply staggering:

While all US equity indices are up strongly YTD, shares of MAA and CPT are in the red despite:

I believe that the disconnect between the fundamentals/private market values is largely driven by fund flows out of publicly traded real estate vehicles (ETFs ownership is ~30% for most US REITs). Apartment assets have been lumped in with troubled sectors like hotels, malls, and office. This had led many ‘investors’ to shoot first and ask questions later.

At Friday’s (11/27) quote, I estimate that Camden trades just north of a 5.2% implied cap rate. MAA also trades 5.2% implied cap rate. There is a notable disconnect between where the sunbelt apartment REITs are trading and the private market value of their assets. Assuming a cap rate of 4.25% (a bit more conservative than recent private market transactions -see more below), CPT and MAA each look to have 25-30% upside.

While the level of upside here is not necessarily exciting, I believe there is limited fundamental downside here given:

While the sunbelt has shown strong population growth, loose zoning and ample buildable land make the supply picture far less knowable/favorable than we see in SF/LA/Boston, etc. Similarly, ample land allows for relatively inexpensive home ownership – in many cases the monthly cost of owning vs. renting is negligible (particularly with sub 3% 30y fixed mortgages). Lastly, as these metro areas evolve, they require additional investments in infrastructure (little state support given no/low state taxes) which can and does lead to higher property tax growth. Property taxes are the largest operating expense component for apartments – large property tax hikes can put a big dent in NOI. So while the population growth (demand) story shines bright, supply/competition from home ownership and higher property tax growth tempers my enthusiasm. 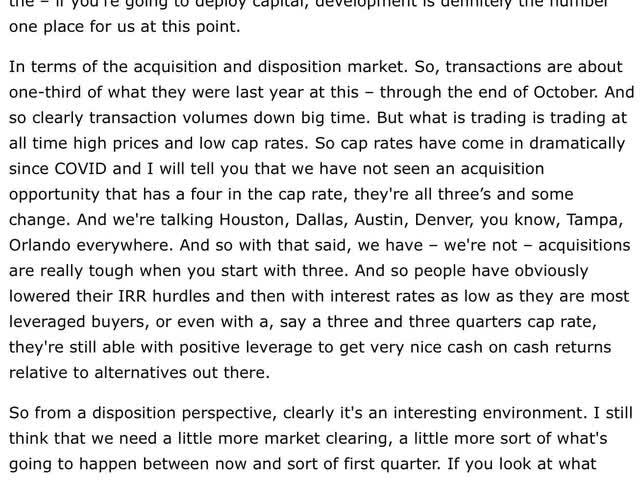 While private buyers entering at a 4 cap are unlikely to generate the same type of mid teens IRRs we’ve seen in the past, with a typical syndication/private capital structure (70% debt) and given exceptionally low financing costs, here returns tend to be about 10% before fees (model shown here). Further, in general apartment lenders seem rational to me – at least considering their alternatives-i.e. a world of 0.85% yielding 10 year Treasuries. Lenders are receiving triple the interest rate (a 150-180 basis point spread).

READ ALSO  Fun on Friday: What a Find!

As such, it is conceivable that cap rates for apartment assets (coastal and sunbelt alike) could trend even lower given how pricey other asset classes have become (many equities, bonds, crypto). Apartment assets provide very durable streams of inflation protected (rents reprice annually) cash flow – equity and debt investors alike may be willing to accept even lower returns in the future. I’d certainly rather own apartments, even at a cap rate in the 3s, instead of bonds over a 10+ year horizon.

On Camden’s 3Q call, Campo went on to discuss the opportunity for ‘capital recycling’ which quite simply means that in today’s environment, Camden has the opportunity to create value for shareholders by: 1) disposing of properties at advantageous cap rates (sub 4%) and (2) redeploying that capital at much higher rates of return. Of course, the reader must be wondering: with private market pricing at all time highs, how can Camden deploy capital at high rates of return? Development. Over the past decade, CPT has sold older assets at advantageous prices and redeployed the proceeds into development projects, earning higher yields. It will likely execute a similar playbook going forward. 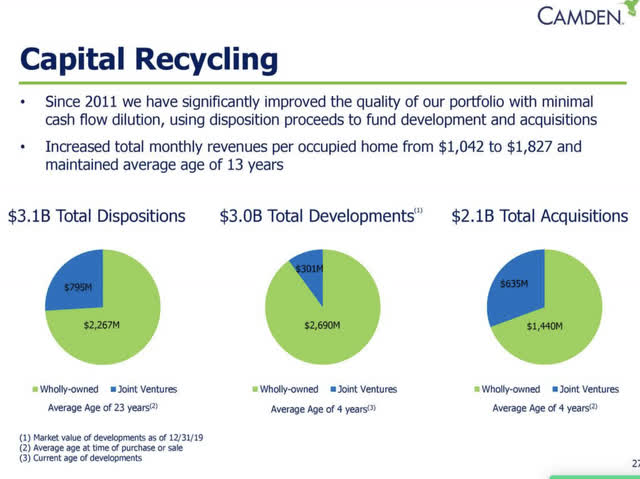 Camden and other apartment REITs have demonstrated an ability to develop assets at attractive yields (NOI of development / cost of development). Of course there are challenges/risks associated with development, mainly:

In today’s economic environment, all of these pose challenges- construction costs have yet to come down (and can be made worse by work rule changes due to COVID). While financing is readily available for stabilized asset (a stabilized asset is constructed and leased), financing (both debt and equity) is generally scarce for apartment development. While the overall demand has been strong historically in Camden’s markets, the present economic uncertainty poses a higher level of lease up risk. Unlike an office or retail project which typically has a meaningful component of pre-leasing (signing tenants to contractually binding leases prior to the shovel hitting the dirt), apartments are not leased until the project is complete (or very nearly complete). This creates a higher risk situation for the developer (which in turn can make lenders hesitant, particularly in a murky economic environment).

While this sounds risky and negative, this creates opportunity for experienced operators like Camden and Mid-America (amongst coastal operators, AVB is best known for its development prowess) to earn attractive yields on development. In many cases, yields here are 5.5+% which makes development an attractive use of capital (even relative to stock repurchases). In order to succeed, the developer/operators needs to:

3) manage the project successfully – complete on time & on budget

4) lease the project up – starting from 100% vacancy in a tough/potentially tough economy – this is no easy task.

Fortunately CPT/MAA have shown an ability to do this time and again. Competitive advantages include: 1) accumulated market knowledge/ construction experience which enables them to select the right locations and come reasonably close to estimated completion cost/time (2) Financing – MAA/CPT have very strong balance sheets and financing is not a hurdle (3) market knowledge coupled with leasing teams armed with industry leading software tools put CPT/MAA in position to successfully lease up their projects.

While there are few opportunities for the REITs to buy apartment assets, there are ample opportunities to create value by selling assets at all-time high prices and earn high rates of return on the proceeds. That said, development activity is limited to 4-5% of the total portfolio (to mitigate risk) – as such, as a base case I expect capital recycling/development will accrete about 1-2% to NAV per share for CPT/ MAA over the next 2-3 years. Coupled with debt paydown (AFFO payout below 100%) and NOI growth, I expect that CPT/MAA will increase NAV 5-6% per year while paying 3%+ dividend yields.

However, to the extent that CPT/MAA become more aggressive in selling assets at sub 4% cap rates while developing assets at 5.5-6.5% cap rates, this would create additional value for shareholders.

Here is a look at the valuation of Mid-America and Camden:

The above assumes that 2021 NOI is flat compared to 2019. On the one hand, population growth has generally been strong and renewal rents have been positive. On the other hand, 2021 will see some flow through impact of negative new lease rates signed in 2020 as well as higher operating expenses – mainly property taxes. As mentioned above, property tax growth is higher in sunbelt markets than in California or Massachusetts where it is capped. Looking out 2-3 years I expect NOI (akin to adjusted EBITDA) growth of 2.5-3% driven by continued high occupancy and modest rent growth (demand should be solid but we are likely to see some supply growth). This could prove slightly conservative.

– Investors continue to shun REITs in favor of growth/tech stocks.

– Expense growth, in particular property taxes are greater than expected.

Disclosure: I am/we are long MAA. I wrote this article myself, and it expresses my own opinions. I am not receiving compensation for it. I have no business relationship with any company whose stock is mentioned in this article.