California, the Shoplifting State Brought to You By Zuckerberg and Friends

Home Financial news California, the Shoplifting State Brought to You By Zuckerberg and Friends
2020-11-032020-11-03By finanz.dk 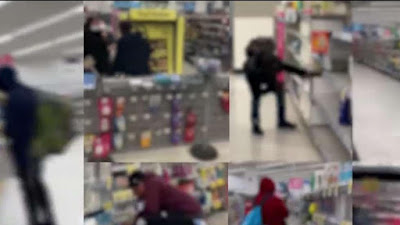 Progressives in California in recent years have strengthened property rights—to other people’s property. Shoplifting has essentially been decriminalized, and retailers that apprehend thieves can be sued. The result: Another Walgreens store in San Francisco, the seventh this year, is closing after its shelves were cleared by looters…

In California, in short, trying to protect one’s property can be a criminal offense. Looters, on the other hand, typically go free thanks to a 2014 referendum that turned theft of property valued at less than $950 into a misdemeanor. Police stopped apprehending shoplifters because it wasn’t worth their time as thieves were released.

Larceny exploded after the initiative passed and has cost businesses in the state billions of dollars. Retailers have been pushing a referendum on Tuesday’s ballot (Prop. 20) that would increase the criminal penalties for shoplifting, especially for serial thieves who work with teams, which is now common in San Francisco.

But look who’s spending to oppose it: Unions and Silicon Valley gentry including billionaire investor Tom Steyer, Facebook CEO Mark Zuckerberg and the wife of Netflix CEO Reed Hastings. As ever, the rich can insulate themselves from social disorder caused by progressive policies. Everyone else can’t.

In addition, I am now seeing, at the entrance at every downtown San Francisco Walgreens, an SF cop (presumably paid for by Walgreens) plus a private security guard.

Of course, there is no way this doesn’t result in higher prices for consumers.

Are Zuckerberg and Lefty Valley really this clueless?

Zuckerberg and crew are fooling themselves if they think they can buy themselves into the good graces of the Marxist left. They haven’t studied history, when the hardcore left gains control, the businessmen, who helped along the way, are the first to be put up against the wall.