U.K. antibacterial control technology group Byotrol (OTC:BYTRF) announced its preliminary results for the year to the end of March this week. Although the results show a marked improvement and bright prospects, what should be a banner year for the company threatens to be simply a decent one. Apparently ideally situated to build strength from the COVID-19 pandemic, instead Byotrol continues to move in a way which always slightly underwhelms. Nonetheless, the outlook is positive and the company again managed up expectations about profits for the current year.

The headline figures which were released for the year showed an improvement over the prior year, both at the revenue and profit levels. This was largely driven by the company’s acquisition of Medimark, which already had established revenues and profits now integrated into Byotrol’s operation. Whereas the consumer division grew revenues on a full-year basis by 11%, the professional division housing Medimark recorded 63% revenue growth. At the time of acquisition, Medimark’s annual revenues were £2.7m and adjusted EBITDA was £380K. Even without growth in the Medimark business (which I expect there has been) that would equate to 45% of the 2020 revenues, while pre-tax loss for 2020 of £43K suggests that Medimark profits essentially subsidised other, loss-making operations within Byotrol. 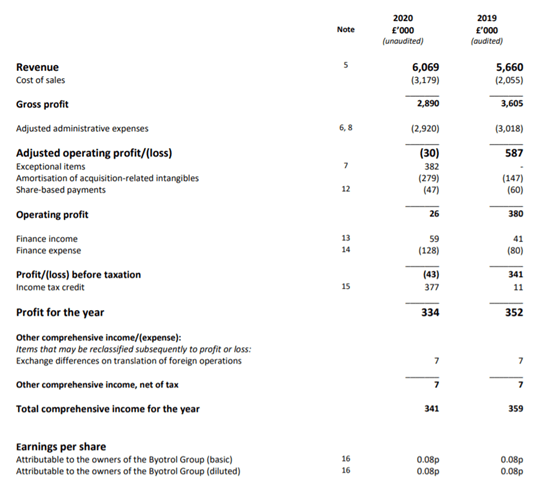 At the pre-tax operating profit level, note, the numbers were below last year’s. However, the topline growth which the Medimark acquisition brought is set to stay, and that does provide a basis for improved profit figures also, in years to come.

The Company is Expecting Additional Boosts From COVID-19

After having iterated a number of possible routes to market over the year, the demand for antimicrobial technology unleashed by COVID-19 has been a boon for Byotrol. Its speciality in antimicrobial ingredients and products has seen an uptick in interest for its role in such products as hand sanitisers, as seen for example in its contract with SC Johnson related to alcohol-free hand sanitisers. Indeed, it guided last month that revenue and EBITDA for the current financial year should be significantly ahead of current market expectations, something it has previously attributed to pandemic-induced demand surges.

However, historically the company has struggled to capitalize fully on opportunities, which helps explain the multi-year slide in its share price prior to 2020. What matters now is whether it will be able to do better in converting the demand created by COVID-19 and heightened hygiene awareness more generally into sustained, profitable increases in revenue. The market continues to have doubts, with the shares being marked down around 10% on the day these results were published.

The company noted that the past year has seen a substantial increase in revenues from product sales compared to revenue from one-off transactions, increasing its stability, which is a fair point, albeit that mostly reflects the Medimark acquisition, in my view, which did help bring some stability to the company. It has also entered more agreements with top notch partners, both in the year under question and since the year ended in March.

The company said that it now expects its profitability to exceed expectations set in recent trading updates. The most recent of those, last month, already anticipated that revenue and EBITDA for the current financial year would be significantly ahead of current market expectations. So the latest guidance, that profitability would exceed even those expectations, is noteworthy.

The company said that current trading remains strong across all key areas of the business. Supply chains are now “considerably easier” than when they were stretched in the Spring and costs are controlled.

The forward order book now sits at £1.1m, which is lower than I would expect and a fall from earlier in the year, but the company said that this reflects a modest summer lull in purchasing activity and to some extent the evolution of the customer base. There are also current discussions with a small number of potential licensees with regard to IP licenses, some at an early stage.

While the outlook for the industry is clearly strong and Byotrol has a good product story, the detail in the outlook is a bit skimpy to justify the managing up – again – of profit expectations for the current year. Byotrol does have a chance to convert demand into profits this year, but more information on how it is doing that would be welcome.

I noted in a previous analysis (Byotrol: A COVID-19 Four Bagger I Think Is Too Risky) that its shares had been suspended for a time last year when it failed to submit accounts on time. The company decided to replace its auditors. In the latest final results, where incidentally the recorded audit fees have fallen by nearly half, the company said that its auditors have informed it that they may not have completed their internal clearance processes in time for the release of the final audited results on or before September 30, 2020, pursuant to AIM Rule 19.

It does intend to apply for an extension (three months is possible) and said that it does not foresee the audited results being different to the unaudited results it has published.

Nonetheless, the company risk appears somewhat cavalier when it comes to fulfilling its listing obligations with regard to auditing. Having already been temporarily delisted on this basis fairly recently, it is surprising that it hasn’t worked harder with its auditors to ensure on-time delivery without a time extension this year.

I don’t like that for the attitude towards shareholders it conveys, but note that I have no reason to suspect that there is anything amiss with the accounts.

The pandemic has greatly increased demand for hygiene products, which is Byotrol’s sweet spot. These results caught only a small period of the time covered, as they ran to the end of March. Nonetheless, the static EPS underlines that as has been its historical bent, the company was not fully able to grasp the opportunity. The possible delay with the audited results was another reminder that the company has not changed fundamentally, though I cut it some slack for that as recent months have provided a challenging environment in which to conduct audit work.

The company has guided that the current year is above expectations, and it again raised expectations. That makes sense as it does now have more scale post-Medimark acquisition and hygiene demand has increased. I remain fairly unimpressed by the company’s track record of converting opportunity to profit, but the wind is now in its sails so this year it has the best opportunity yet of so doing. Time will tell.