Business of polling takes another hit from US election failures

In a chaotic election night that did not result in a clear winner of the US presidency, there was one undisputed loser: the pollsters.

Conservative and Democratic pundits alike disparaged the polling companies who, similarly to the 2016 race, vastly underestimated Donald Trump’s performance. Polls before the vote suggested that Democratic candidate Joe Biden would win by a clear margin, but the contest turned out to be far closer than any of these models had predicted.

Tucker Carlson, the rightwing Fox News personality, on Tuesday night told viewers that pollsters should be fired and “go do something useful like hang drywall or learn to paint”.

Even Tom Bevan, founder of Real Clear Politics, a leading poll aggregation site, censured the pollsters, noting that a highly-respected poll conducted by The New York Times and Siena College overestimated Mr Biden’s support by as much as 10 percentage points in key states like Wisconsin and Iowa.

In the US, political polling is conducted by a highly fragmented cottage industry of mostly privately owned research companies and universities. Few are household names.

The whole idea is that I put out a poll, get a lot of publicity for it, and then make money selling data to private clients

But these groups punch above their weight in influence, as their increasingly hyper-specific polls over the past decade have been blasted across the media, playing a key role in shaping Americans’ expectations about the outcome of elections.

Scott Rasmussen, founder of the eponymous polling site and co-founder of ESPN, pinpoints a change in the industry to the 2008 presidential race. When he began polling in the 1980s and through the 1990s, political surveys were much less specific and less frequent, he said. Even as recently as 2004, he recalled being one of the few pollsters tracking the presidential race daily.

But in 2008 that changed as more players entered the space, and the internet age brought demand for more and more data in real time. That was also when flashy numerologists such as Nate Silver arrived on the scene, peddling percentage chances of a particular outcome after ingesting raw material from the full panoply of pollsters.

The trend reached its height when The New York Times in 2016 introduced an election forecasting “needle” that toggled back and forth in real time, to the agony of nervous Americans watching the results.

This year, Mr Silver assigned an 89 per cent chance of Mr Biden winning the election, based on polls that again appeared to miss many Trump supporters in swing states.

Industry executives say that polling itself is much harder to do today than it was in previous generations. The advent of caller ID on phones has meant fewer people pick up, and younger people are much less likely to answer the phone to an unknown caller.

Polling is a fairly costly business. Expenses have come down over the years, but executives say it still costs about $50,000 to poll 1,000 people by phone, mostly due to the cost of labour.

Pollsters run these political surveys at a loss to publicise their name, prove their methods and build a reputation that will pay off with corporate clients.

“The whole idea is that I put out a poll, get a lot of publicity for it, and then make money selling data to private clients,” said Dan Cassino, a political scientist who has polled New Jersey residents for years as a professor at Fairleigh Dickinson University. “Universities are in this for the same reason. They’re not trying to make money but they’re trying to get PR.”

Gallup spearheaded the model after making a name for itself when founder George Gallup correctly predicted Franklin Roosevelt would win the 1936 US election. The Washington-based company then began selling its research to advertising companies and other private clients.

But after decades in the business, Gallup in 2015 stopped conducting political “horse-race” polls after a string of misses, including incorrectly forecasting that Republican Mitt Romney would defeat Mr Obama in 2012*. Now, Gallup largely polls Americans about their views on specific issues, not who they will vote for.

YouGov, a market research group listed in London that specialises in online panels, has long told investors its political work “enhances its reputation for accuracy”, such as when it came closest to predicting the outcome of the Brexit referendum. 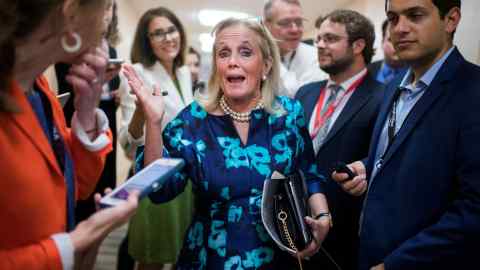 The company, which has a market value of £1bn and revenues of £152.4m in the year to July 2021, has been expanding in the US market and raising its profile through political work, launching a political polling website to become “one of the biggest players now in public data”.

But YouGov, like its peers, failed its most important test in years. The company’s polling predicted Mr Biden would secure 53.2 per cent of the popular vote, taking him to a resounding victory in the electoral college, with 364 votes.

Ultimately Mr Rasmussen believes that polling, the field he helped shape in recent decades, needs to be “ripped apart and rebuilt”.

“It simply doesn’t work,” he said. Mr Rasmussen had last week predicted that the range of outcomes for this election was “anything from a narrow Trump victory that would take weeks to count, to a somewhat modest Biden victory”.

“And bluntly,” he said, “I don’t think we should have offered a lot more detail than that.”