Burlington Stores’ (NYSE:BURL) second quarter results looked ugly, maybe more so than most analysts and investors had been expecting. However, a word of encouragement regarding the third quarter, one that had been lacking in the current off-price retail earnings season, was probably enough to send shares higher on Thursday, August 27.

Revenue decline of nearly 40% YOY was much worse than consensus of something closer to a 30% decrease. However, margins looked much better than analysts’ projections, which led to adjusted per-share loss beating the average estimate by a sizable 50 cents. 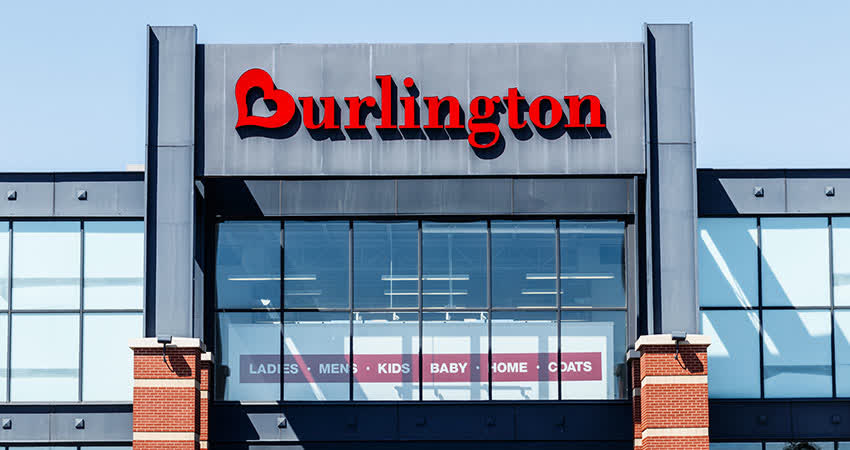 On the results of 2Q

The narrative around second quarter performance sounded familiar to those who follow the off-price retail space. It was very much the same story told a few days ago by peers TJX Companies (TJX) and Ross Stores (ROST).

Re-opening sales impressed, with pent-up demand in the early part of the quarter exceeding management’s expectations. The sudden pick-up in activity led to an inventory depletion that Burlington could not handle quickly enough, causing a mid-quarter drop-off in revenues. Before the retailer could react, I believe that a combination of COVID-19 resurgence and uncertainty around further fiscal stimulus in June and July led to weakness in the last few weeks of the period.

Burlington’s top line was hit even harder than its peers’ (open-store comps of -14%) probably for a couple of reasons: 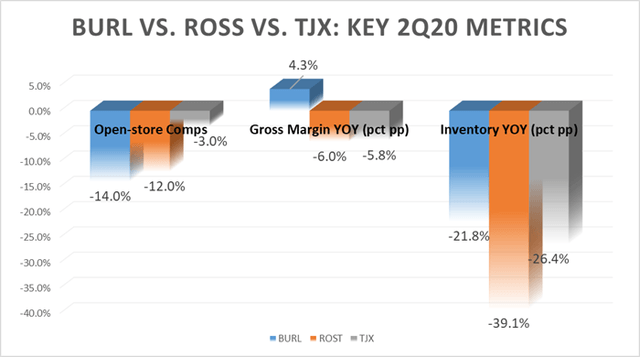 What may have encouraged investors the most was CEO Michael O’Sullivan’s remarks about the third quarter. This was an early but rare sign provided by the off-price space that the crisis recovery, which I expected to take a couple of quarters, could happen more quickly than anticipated:

As we have re-built our store inventory levels over the last several weeks, we have seen significant improvement in our sales trend.

I maintain my views that off-price, alongside most other retail sub-sectors, may very well continue to struggle in the near term. The space is reliant on bargain hunting, leading to increased foot traffic at physical locations, since e-commerce tends to represent a small portion of the business. While encouraging news regarding the pandemic and the normalization of the economy surfaces every now and then, the recovery has been spotty. For this reason, I would not hold my breath in anticipation of a strong price rebound in BURL or its peers’ shares.

However, for the long term, I remain optimistic about the space. In my view, off-price will likely thrive compared to specialty and department stores, even if COVID-19 leaves a long and painful recession in its wake. The better news is that the upside between current prices and all-time highs still exists (see graph above), which is rare among high-quality companies in the current market environment.

Having said that, I continue to prefer TJX and, secondarily, ROST over BURL. In my recent sector face-off article, I observed that Burlington’s debt load is a bit too heavy compared to its competitors’. In addition, I believe that any improvement in Burlington’s business prospects will spill over across the sector, benefiting other players.

For now, I remain long TJX and bullish ROST and would consider BURL a mere “back pocket” alternative in case I chose to diversify my positions further within the retail sector.

Beating the market by a mile

TJX is one piece of my All-Equities Storm-Resistant Growth portfolio. Other mega-cap names have produced a much larger portion of the gains, which have been better than the S&P 500 by a mile (see graph below, pink line).

To learn more about the storm-resistant growth approach to investing, I invite you to join our community. Click here and take advantage of the 14-day free trial today. After that, don’t forget to join the Live Chat so we can share a few thoughts. 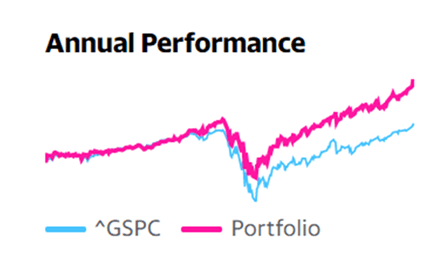 Disclosure: I am/we are long TJX. I wrote this article myself, and it expresses my own opinions. I am not receiving compensation for it (other than from Seeking Alpha). I have no business relationship with any company whose stock is mentioned in this article.