Burlington May Not Recover Quickly From This Crisis (NYSE:BURL)

Burlington Stores (BURL) has long been one of my favorite retailers. The company has experienced enormous earnings growth in past years because of a virtuous combination of revenue and margin growth, combined with prudent capital spending and cash returns to shareholders.

The selloff earlier this year sent Burlington shares down from $250 to just $105 in the span of a few weeks, which is somewhat difficult to believe. Shares were unequivocally a bargain at that time, but at this point, I’m not so sure. My intense bullishness on Burlington over the long term has been tempered by the situation we’re in today, as I fear that Burlington’s customers may not return in the same quantities with which they once frequented its stores.

Burlington is best in class, but is that enough?

I’ve liked Burlington for a long time because it does the things a retailer must do to be successful. It turns over inventory quickly, which leads to fewer markdowns and lower cash investment in product. It has consistently boosted comparable sales and kept a lid on SG&A costs. It buys back stock opportunistically to help drive higher EPS via a lower float. It has optimized its merchandise mix over time to be highly diversified in different product categories. The list goes on, but the point is that Burlington is one of the best retailers I’ve ever come across for these reasons.

However, will that be enough through this crisis and beyond? Burlington shuttered its stores beginning about a month ago, and more recently announced fairly drastic measures of furloughing nearly everyone, slashing executive pay, stopping share repurchases, and cutting capex. Many retailers are doing this sort of thing in order to survive, so Burlington isn’t alone. That doesn’t make it less painful, however.

There is no indication as far as I can tell as to when stores will be allowed to open. There is no playbook for this sort of crisis, so leaders are having to make it up as they go. That leads to uncertainty, and uncertainty is a risky thing when investing.

To combat this uncertainty, Burlington also recently issued a billion dollars of new debt, $700 million of which is convertible with a 2.25% interest rate, and the balance which is traditional debt at 6.25%. The company had just under a billion dollars of long-term debt at the end of the most recent fiscal year, so it has essentially doubled that total with this latest offering.

While Burlington can afford to service this debt under normal circumstances, it will crimp profitability given the increase in interest expense, not to mention any costs to shareholders from conversions that may occur. The conversion price works out to ~$220 per share, which is much less than the stock traded for earlier this year. I’d suggest Burlington will ultimately issue substantially all of the shares available under this debt before the five-year maturity period has expired. That works out to just over 3 million shares on a current share count of ~65 million, so the impact isn’t devastating by any means. But it is a headwind to EPS as the float should rise as a result of this issuance.

The other thing I’m worried about is that I’m not sure Burlington’s customers will have the capacity to return to normal anytime soon. 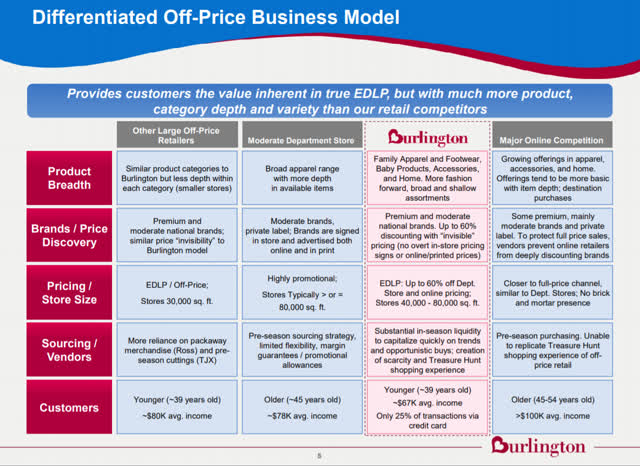 Burlington’s strength has been in its off-price model that attracts bargain hunters, as we can see above. The thing is that Burlington’s average customer makes $67k annually, which is well below any of the other shopping formats the company lists above for its competitors. Burlington also notes that ~75% of its transactions are something other than credit cards, implying a huge amount of purchases are done with cash. That further implies that its customers may not have the liquidity that wealthier customers might with credit limits on cards that can see them through rough patches. If that is the case, Burlington may struggle to get people that don’t have cash back in the stores.

In addition, unemployment claims continue to soar in the US, with more than 20 million people having become unemployed in recent weeks alone. These numbers are unprecedented in their scale, to say the least, and Burlington’s target customers are being impacted by these jobless claims. Industries hit the hardest are service businesses like restaurants, nail salons, hair salons, etc. These are the places Burlington finds its customers, and with so many of them being unemployed and likely sustaining tremendous damage to their personal balance sheets, I can’t imagine they will collectively return to discretionary shopping in the way they used to anytime soon. That is one of the sad realities of this crisis.

I continue to think Burlington is a worldclass retailer, but I also think this crisis has upended its business model to an extent.

Analysts reckon Burlington will hit $4.61 in EPS this year, but the truth is nobody has any idea what Burlington will earn this year. The company’s stores remain closed indefinitely and even when they reopen, we don’t know if consumers will return to shop or not.

Looking further out, we can see estimates for three years from now are nearing $10 per share in earnings, which would seem reasonable based on the fact that Burlington guided for just over $8 in EPS for this year before the crisis ruined the economy. Three years seem like a long time from now, and for a variety of reasons, I hope we’re back to normal by then.

However, we don’t know how much damage will have been done to consumers on the margin by this crisis as months of unemployment for tens of millions of people is unspeakably costly. Burlington’s customer is on the front line of this crisis, so I’m cautious for that reason.

At 22 times earnings that may or may not take place two years from now, I think Burlington is fully priced, even at this much lower level. The rebound from the lows was massive and swift, and I think that has put Burlington back to being fairly priced, rather than cheap. On a pullback, I’d love to own Burlington. But today, given the risks and unknowns, I think I’ll pass.

Previous PostBezos, Musk among billionaires gaining net worth in pandemic: reportNext PostMacroVoices #216 David Rosenberg: Stagflation is coming but not yet