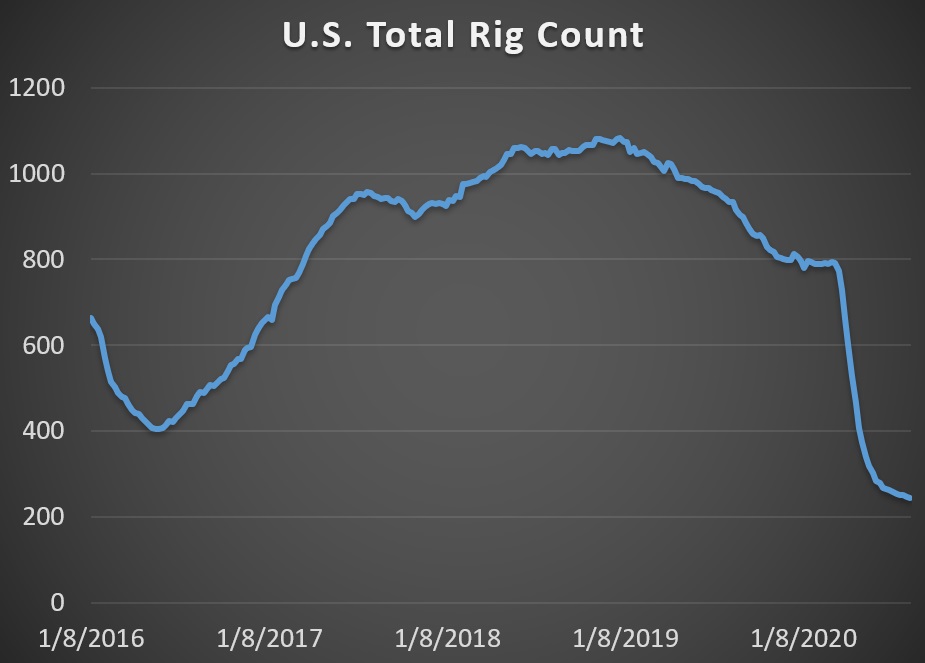 – As gasoline demand bounced back, refining margins for gasoline rose too, prompting refiners to switch their mixes back towards gasoline.

– Jet fuel refining margins have plunged and not rebounded, however, incentivizing the blending of jet fuel into distillate fuel.

–    Hess (NYSE: HES) is laying off 10 percent of its workforce after posting its fifth quarterly loss in a row.

–    Total (NYSE: TOT) and its partners have launched the third phase of the development for the Mero oil project in the Libra block off the coast of Brazil. The Mero 3 is using a floating production storage and offloading vessel and is expected to come online in 2024.

Oil prices rose to a five-month high this week on hopes that the economy is reviving. New coronavirus cases have fallen back in previously hard-hit states such as Florida and Arizona. At the same time, the U.S. shale industry is not rebounding, adding to bullish momentum on the supply side of the equation. Prices fell back in early trading on Tuesday.

Trump admin approves Alaska drilling. The Trump administration approved an oil leasing program for the Alaska National Wildlife Refuge (ANWR), opening up 19 million acres of wilderness for drilling for the first time. The Interior Department is aiming to finalize the process to make it difficult to undo if the election results in a change of administration. However, investors question the profitability of the enterprise, and several major banks, including Goldman Sachs and Wells Fargo, have ruled out financing any ANWR drilling. Related: Oilfield Service Companies Are Bailing On The Permian

California warns of blackouts amid heatwave. California warned of widespread power blackouts on Monday amid high heat and humidity. The state’s large portion of renewable energy posed challenges to grid operators during the latest heatwave. But the grid operator canceled the blackouts Monday night as the disaster seemed to have been averted.

Chevron in talks over Iraqi oil field. Chevron (NYSE: CVX) is in talks with Iraq over a potential investment in the Nassiriya field.

Automakers ink deal with California on emissions. Five automakers – Ford, Honda, BMW, Volkswagen, and Volvo – signed a deal that binds them to meet strict state standards on fuel-efficiency requirements. The deal is stricter than the Trump administration’s lower federal fuel economy standards and could have a far-reaching impact because 13 other states follow California. The California standards require average fuel economy to rise from 38 miles per gallon today to 51 miles per gallon by 2026. The Trump standard only requires 40 mpg by then. Still, the California agreement is slightly weaker than the original Obama-era rules.

Refiners retool amid demand uncertainties. Phillips 66 (NYSE: PSX) said it would retool its 120,200 b/d Rodeo refinery in California to use renewable fuels and that it will shut its 44,500 b/d Santa Maria refinery. Valero (NYSE: VLO), Marathon (NYSE: MPC), and HollyFrontier (NYSE: HFC) also have plans to boost renewable fuel refining.

China buys more oil from U.S. China is buying 14 million barrels of oil from the U.S. next month to comply with the Phase 1 trade deal signed earlier this year. Those volumes are set to be double the amount purchased in August.

Oil exploration coming to an end. Faced with pandemic-driven demand destruction and a relentless call for climate-conscious and ethical investing, oil executives are resigning themselves to the uncomfortable fact that a significant amount of their vast oil and gas reserves will end up totally worthless. Related: Iran Seizes Oil Tanker In Strait Of Hormuz

Bank of America: Oil to hit $60. Bank of America expects oil prices to recover to $60 a barrel for Brent crude in the first half of next year thanks to shrinking global inventories and prices improving faster than previously expected.

OPEC compliance hit 95% in July. OPEC compliance with the production cuts reached 95 percent in July. Also, Nigeria and Iraq are expected to cut their production by another 114,000 and 400,000 bpd, respectively, in August and September to compensate for lagging performance in prior months. The success of the deal is notable. “However, in reality, they are likely concerned that it is taking longer for storages to see some material level relief, while the price recovery the alliance was hoping for is also pushed further in time due to the pandemic’s persistence,” Rystad Energy said in a statement.

Guyana cancels oil tender. The new government in Guyana canceled a tender for a one-year contract to market the government’s share of Liza crude from the offshore Stabroek block. “We made it clear in the campaign that companies should not be submitting bids to an illegal government that was there at that time,” Vice President Bharrat Jagdeo said, referring to deals signed during the five-month political impasse.