In late April, nearby WTI futures fell to the lowest price since trading began in the early 1980s when they reached negative $40.32 per barrel. Brent futures declined to a low of $16 per barrel, the lowest level of this century. The last time Brent traded under $16 was in 1999. WTI fell to a price that was over $56 per barrel below Brent because it is a landlocked crude oil. Brent travels around the world by tankers. The lack of storage capacity as the price fell on evaporation of demand caused those holding long positions in the May NYMEX crude oil to scramble and sell at any price as the contract approached its expiration date.

The prices of both nearby WTI and Brent crude oil recovered to over $40 per barrel, but the trajectory of the recovery slowed in late June. Since then, October futures on NYMEX have traded in a range from $37.56 to $43.78. the latest high came on August 26, and the price was just below the $43 level on September 1. The recovery gave way to a prolonged consolidation period that has lasted for over two months. Bullish and bearish factors are pulling the energy commodity in opposite directions and have caused volatility to decline dramatically over the past weeks. The ProShares Ultra Bloomberg Crude Oil product (UCO) and its bearish counterpart (SCO) provide double leverage based on the price action in a portfolio of nearby NYMEX crude oil futures contracts. The leverage comes at a price as time decay eats away at their values. The price consolidation causes the bullish and bearish products to decline as time passes, and the price does not move.

The price action in crude oil has been as exciting as watching paint dry over the past weeks.

In August, nearby October crude oil futures traded in a range from $39.89 to $43.78 per barrel, a far cry from the price action earlier this year. Over the month that ended on Monday, the total number of open long and short positions moved from two million to 2.061 million contracts. Price momentum and relative strength indicators were slightly above neutral readings on September 1. Daily historical volatility at 15.4% reflects the static market. The metric was at a high of over 153.5% in March.

Crude oil continued to make some upside progress in August as the price rose to $43.78 on August 26, ten cents the previous short-term peak of $43.68 on August 5. The trend is marginally higher, but there is little excitement in the crude oil market. Global producers would like to see the price higher, but the stability is likely welcome after the decline to lows in April. OPEC, Russia, and other world producers did not taper their output cut, which remained at 7.7 million barrels per day. The production cut went a long way to balancing the petroleum market’s fundamental position as demand concerns continue.

The trend is always your best friend in markets, and it remains higher in crude oil. However, the level of contango, or forward premium, eats away at long positions in the futures market in the current environment.

The path of the US dollar supports a higher price

We have seen significant rallies in some of the other members of the commodity asset class. The price of lumber rose to a new all-time high at above $900 per 1,000 board feet. Copper appreciated to over $3 per pound for the first time since 2018. Even grain prices have moved higher over recent sessions. The US dollar is the world’s reserve currency and the pricing benchmark for most commodities. The dollar index fell to a new medium-term low on August 31.

The weekly chart of the US dollar index illustrates the decline of the dollar. The index fell from an eighteen-year high at 103.96 in March to the lowest level since 2018. The dollar index fell below its critical technical support level at 93.395, the September 2018 low, and made a lower low at 91.99 on August 31. A falling dollar is bullish for commodity prices, and crude oil is no exception.

Meanwhile, central bank stimulus and government programs that are increasing deficits are inflationary. Last week, the US central bank told markets they are willing to tolerate higher inflation rates over the coming months. Inflation is the commodity market’s best friend. Rising inflation is a bullish factor for the price of crude oil.

US production declines and inventories suggest the price is heading higher

In the US, the American Petroleum Institute and Energy Information Administration reported the sixth consecutive week of stockpile declines for the week ending on August 28.

The inventory data from the EIA and API have been supportive of the price of crude oil, which was above $41.50 per barrel for the October NYMEX futures contract on Thursday, September 2.

UCO is a leveraged bullish tool, but it suffers from time decay during consolidation periods

The weakening US dollar, production cuts worldwide, and falling inventories and output in the US all support the price of crude oil. Technical support for the October NYMEX futures contract is at the July 30 low of $39.00 per barrel with resistance at $43.78, the August 26 high. At the $41.66 level on September 2, the energy commodity was trading at just above the midpoint of the narrow trading range.

The technical picture continues to support higher oil prices, and the trend is always your friend in futures markets. I typically use the ProShares Ultra Bloomberg Crude Oil product (UCO) and its bearish counterpart (SCO) as an alternative to the futures market for risk position in the energy commodity. However, the double leverage in the products has a drawback, which is time decay. Both the contango or forward premium for oil and the decay of the products eat away at their values when the market’s volatility shrinks. The fund summary and top holdings of UCO include: 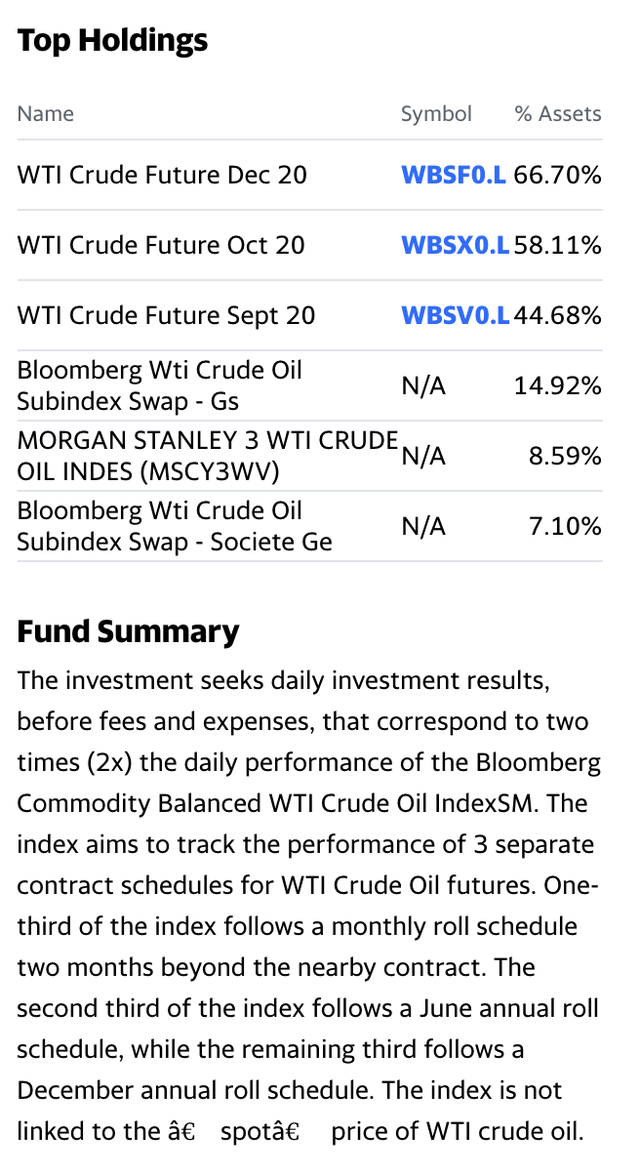 SCO is the inverse product that appreciates when the price of crude oil declines. UCO has net assets of $1.54 billion, trades an average of over 8.6 million shares each day, and charges a 0.95% expense ratio. The price of October NYMEX crude oil futures moved from $39 on July 30 to a high of $43.78 on August 26 or 12.3%. 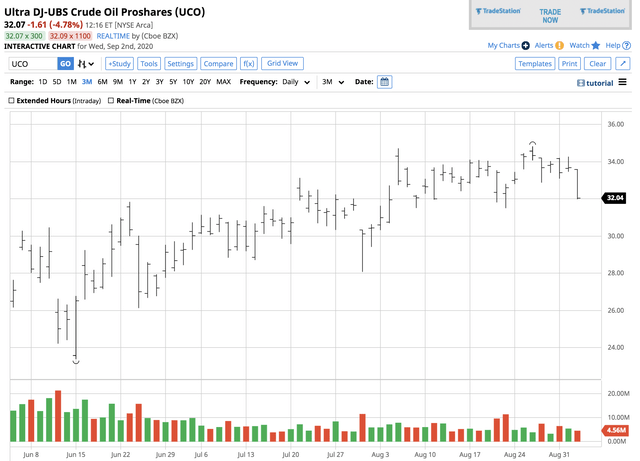 Over the same period, UCO appreciated from $28.07 to $34.82 per share or 24% as it delivered almost a double percentage gain compared to the October futures contract.

Demand remains the critical factor for crude oil that could shift a crawling bull into a plunging bear in the blink of an eye. The energy commodity’s futures tend to take the stairs higher and an elevator to the downside. However, the fundamental and technical pictures as of September 2 continue to support higher highs in the oil market.