A top Brussels official has urged the EU to rally behind plans to curb budget payments if countries breach the rule of law, warning that the bloc will “overheat” unless it eases friction between capitals.

“We are going to distribute €1.7tn in an atmosphere where trust between member states is decreasing,” Ms Jourova said in an interview. “It cannot work. We cannot overheat the system. There must be some safeguard.”

The proposal to curb funding to countries deemed in breach of EU laws and values has triggered a split that threatens to delay the disbursement of money to help revive Europe after the Covid-19 pandemic. Northern European countries and MEPs want the plan pitched by the German EU rotating presidency made tougher, while central European states such as Hungary say it is already too strict. 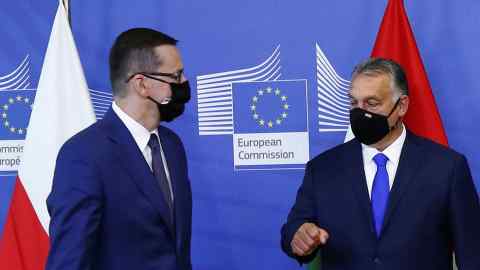 Ms Jourova insisted Berlin’s proposal could be a “very important contribution” to the EU’s “toolbox of protective measures”, although she conceded the debate was now focused “more and more” on “financial interests” rather than the rule of law. She said she would be “heavily disappointed” if member states made the mechanism as weak as possible, just so they could start the flow of money to their coronavirus-battered economies as soon as possible.

The proposal is a response to growing fears about a slide towards autocracy and corruption in several EU member states. The debate has grown increasingly bitter, with countries in central and eastern Europe claiming they are the victims of northern European prejudice and double standards.

Ms Jourova said the planned new safeguards are needed to avoid the pitfalls of the so-called Article 7 EU disciplinary procedures launched against Poland in 2017 and Hungary in 2018 over alleged breaches of bloc laws and values. The cases are stuck because member states can only impose sanctions such as suspending bloc voting rights if they have unanimous support — but Warsaw and Budapest have said they will protect each other.

“I would be worried if it resembles the Article 7 process,” Ms Jourova said of the proposed new rule of law mechanism. “So I do hope it develops and that we will have some result that will enable us to introduce the factor of the rule of law [into the] protection of finance.”

The German presidency proposal floated last week would, in some circumstances, permit the suspension of payments of EU taxpayer money to countries that flout principles such as judicial independence and respect for democracy.

But the new text has triggered a backlash from countries including Finland, the Netherlands, Sweden and Denmark, who argue it is too weak.

They object to a proposal to hand a single country a “brake” that would delay the suspension process. They also say the text creates too high a legal threshold for triggering a block on funds.

Conversely, Poland and Hungary object to the German draft because they claim they are being singled out.

Hungarian premier Viktor Orban last week said he was suspending bilateral relations with Ms Jourova and demanded her resignation after she called his country an “ill democracy” in an interview in Der Spiegel.

On Tuesday, the European Court of Justice ruled that a 2017 law passed in Hungary that effectively forced Central European University, founded in 1991 by George Soros, to leave Budapest was incompatible with EU law. Last year, CEU relocated to Vienna.