Brussels holds out on post-Brexit financial services access for UK

Brussels has warned that it will only grant the City of London market-access rights that are “in the EU’s interests” even after Britain adopted regulatory decisions designed to smooth future ties.

Britain’s chancellor Rishi Sunak announced on Monday that the government was taking regulatory decisions intended to ensure that EU-based exchanges, clearing houses and financial benchmarks could continue to be used by UK customers.

The moves, known as equivalence decisions, effectively endorse EU regulations and financial supervision as being as good as the UK’s.

Mr Sunak said the step was intended to give financial companies in the UK and EU more certainty over trading arrangements after the end of the Brexit transition period on December 31.

But Brussels made clear on Tuesday that it was unmoved by the British gesture, and that it was still assessing whether to grant the UK reciprocal equivalence.

Making equivalence designations without a quid pro quo agreement with the EU is a bold step by the UK and puts the ball in the EU’s court.

A European Commission spokesperson told the FT that the UK announcement “provides no further clarity on the UK’s possible divergence from EU rules going forward, or about the UK’s future supervisory practices”.

“The Commission’s equivalence processes are autonomous. We will consider equivalence decisions where they are in the EU’s interests,” the spokesperson said.

The rebuff will feed into growing tensions between London and Brussels over access to each other’s financial services markets.

Financial services is an area largely outside the two sides’ formal future-relationship talks. Instead, future access will depend on the unilateral equivalence decisions taken by both sides. Within the EU, it is the European Commission that assesses whether such rights should be granted or withdrawn.

Britain and the EU agreed to try to complete equivalence assessments on each other by July but the process has instead dragged on, much to the UK’s frustration, with Brussels repeatedly arguing that Britain has failed to provide enough clarity about possible intentions to diverge from EU rules.

UK officials argue that the government has already supplied 2,500 pages of answers to EU questionnaires on Britain’s regulatory plans.

The government also published a financial services bill last month that it described as its “first step in shaping a regulatory framework for the UK’s financial services sector outside of the EU”. UK regulators such as the Financial Conduct Authority have also set out future plans.

Although equivalence decisions are a piecemeal form of market access that does not cover all services, bankers and fund managers hope they will provide a basis for relations that prevents extensive disruption. 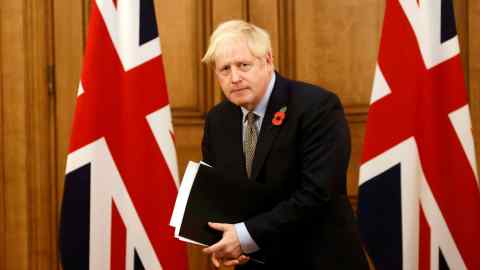 Market participants in the City said Mr Sunak’s move placed the onus on Brussels to act.

“Making equivalence designations without a quid pro quo agreement with the EU is a bold step by the UK and puts the ball in the EU’s court. Essentially, the UK is saying it is happy to be Europe’s financial services destination of choice,” said John Garvey, global financial services leader at PwC.

Mr Sunak said the UK was acting “to provide clarity” given continuing silence from Brussels on what rights it might be prepared to offer Britain. The UK said it was adopting all the equivalence decisions that it could without input from the European side.

EU diplomats acknowledge that the bloc is unlikely to announce any equivalence measures while the future-relationship talks are continuing, highlighting political sensitivities and negotiating tactics.

The EU has already sought to dampen British expectations, announcing in July — via a footnote to a policy paper — that sought-after rights for investment firms were off the table for the time being.

So far, the only equivalence decision taken by Brussels in preparation for the end of Britain’s transition period concerns access for European customers to UK clearing houses. The European Central Bank and Bank of England had warned the step was vital to protect financial stability. The EU equivalence decision runs until mid-2022.