Brussels cracks down on Cyprus and Malta over ‘golden passports’

Brussels has launched legal action against Cyprus and Malta to stop their scandal-ridden “golden passport” schemes that sell EU nationality to rich foreigners.

The European Commission accused both Mediterranean island states of undermining “the essence of EU citizenship” and threatened to take them to the bloc’s top court.

The EU executive’s move on Tuesday underscores fears that programmes run by countries across Europe to sell nationality and residence expose the bloc to security and crime risks. The Cyprus and Malta schemes have been plagued by allegations of corruption.

Sven Giegold, a member of the EU parliament’s Green group, said the commission had taken an “an important step against money laundering and corruption in Europe” — and should now tackle citizenship and visa schemes in Bulgaria, Portugal and other countries.

The commission also said on Tuesday that it was writing again to Bulgaria to “highlight its concerns” about Sofia’s investor citizenship scheme.

For years, the governments of both countries have ignored public outrage

“Passports and visas are not a commodity,” Mr Giegold said. “Malta and Cyprus give shelter to criminals and the corrupt along with their wealth. This practice endangers internal security in Europe.”

The commission said Cyprus and Malta would have two months to answer formal written criticism, or face the next steps of a legal process that could end in the European Court of Justice. The EU executive argued the countries’ “golden passport” programmes threatened the integrity of bloc citizenship and breached duties of “sincere co-operation” between member states.

The move comes after an Al Jazeera undercover documentary triggered the resignation last week of the speaker of Cyprus’ parliament and another MP. Both men were filmed offering to help secure a golden passport for an Al Jazeera team member who posed as a Chinese investor with a money laundering conviction. The Cypriot MPs have denied any wrongdoing. 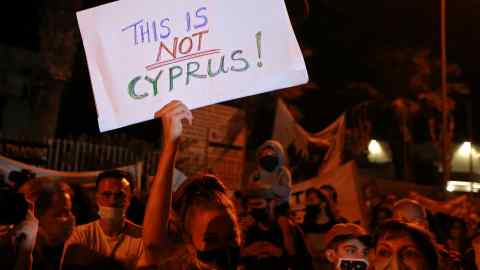 The Cypriot scheme — under which investors must pay at least €2m for a property — has also been hit by revelations of nationality awards to individuals accused of corruption or linked to repressive regimes.

Laure Brillaud, an anti-money-laundering specialist at Transparency International EU, the anti-corruption group, said there was “overwhelming evidence” that the Cyprus and Malta golden passport schemes served “corrupt interests, not the common good”.

“For years, the governments of both countries have ignored public outrage,” she said.

In Malta, police last month arrested Keith Schembri, ex-chief of staff to Joseph Muscat, the former prime minister, as part of a probe into alleged money laundering linked to kickbacks from the country’s golden passport scheme. Mr Schembri has denied any wrongdoing.

The Cypriot government said it had yet to receive a communication from the commission and would respond when it did so. Malta’s government made no immediate comment.