Brussels is considering ways of pushing ahead with the creation of the EU’s Covid-19 recovery fund without the participation of Hungary and Poland, a senior European Commission official has warned, piling pressure on the two countries to drop their veto over the union’s budget.

The official said 25 EU member states could proceed with setting up a planned €750bn pandemic recovery fund next year to act as a “bridge” until Hungary and Poland reversed their veto over the bloc’s overall €1.8tn budget and recovery package.

The fact that the commission is contemplating such an extreme fallback option highlights the severity of the stand-off with Warsaw and Budapest, which governments fear will derail the EU’s recovery from the pandemic by freezing billions of euros of aid for struggling economies.

EU leaders are due to meet in Brussels next week to discuss the budget crisis after Hungary and Poland doubled down on their objections to a rule-of-law mechanism they say targets their countries.

Diplomats still hope the eastern capitals can be convinced to drop their objections and throw their weight behind the recovery fund and EU budget agreed by leaders in July. If no solution is found in the coming weeks, Brussels’ €750bn recovery fund will not be able to come into force next year and the bloc will have to resort to an austerity budget in 2021.

“For the time being things seem to be deadlocked,” said one EU diplomat. “If there is no agreement with Poland and Hungary at leaders’ level next week, and things don’t look like moving, the other 25 member states will have to consider other options. No one wants to go down that route, but they may be left with no choice if Poland and Hungary don’t move.”

Faced with the current crisis, Brussels is now “exploring options” that would create a fund that “replicates the effects of the original package as it is currently designed,” the commission official said.

The official added that a concrete plan had not yet been sketched out but that it was “legally possible” for the EU’s 25 governments to provide grants and loans to participating member states, excluding Hungary and Poland. “We would have to redesign the engineering behind Next Generation EU for the 25 member states that want to move forward,” the official said.

The official stressed this creative option would be based on EU law and governed by the commission rather than an inter-governmental treaty between EU governments. “We are pretty confident that such a solution can be found and put in place rapidly.” 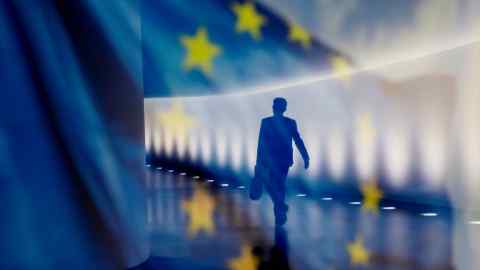 EU diplomats have been scrambling to find solutions to the budget impasse to keep money flowing to countries hardest hit by the pandemic, two weeks after Poland and Hungary exercised their veto in protest at a rule-of-law condition that ties payments to compliance with EU values.

Without an agreement this month, the EU will enter a new year without a formal budget for the first time in more than 30 years. That will result in the loss of tens of billions of euros for policies such as climate change, migration and the Erasmus student exchange scheme.

Structural funds for the poorest EU countries — including Hungary and Poland — would also be hit hard under an austerity budget as Brussels would not be able to pay out cohesion money for new projects. Payments from the EU budget will fall between €25bn-€30bn next year without an agreement, the official said.

To ramp up the pressure further on Warsaw and Budapest, the planned rule-of-law conditions can also apply to the emergency budget if they are agreed by the majority of member states and the European Parliament.

German chancellor Angela Merkel, who is head of the rotating presidency of the EU, has called next week’s leaders’ meeting a “very, very important summit” to solve the crisis. “Unfortunately, I cannot report that the mission has been accomplished, even though I would like to do so,” the chancellor said this week.

Previous PostThe Government Has Printed 40 Cents For Every Dollar That Existed In MarchNext PostE-Sports Gain New Behemoth As Bally’s Gets Serious (NYSE:BALY)