Hock Tan, the CEO of Broadcom (AVGO), has proven over the years that he is an absolute wizard when it comes to buying companies, making them more efficient, managing them to maximize their potential, and thus delivering excellent ROIs for the company. Tan has also proven to be a very shareholder-friendly chief executive. As a result, Broadcom’s dividend has grown from $1.94/share to $13.00/share over the past five years, making it one of the best dividend growth stocks in the entire S&P 500 (if not the best). The company is my favorite dividend income stock because it also has excellent potential for capital appreciation, making it a total return aristocrat. 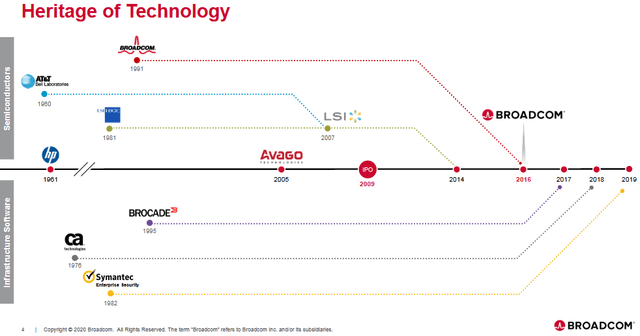 As a result, and combined with organic growth, over the past five years Broadcom has:

In so doing, Broadcom has increased infrastructure software to more than 25% of the company’s total revenue. As most investors are aware, software typically delivers higher margins than do semiconductors and hardware. That being the case, greater software revenue has been a key catalyst for Broadcom’s increased gross margins and FCF.

At the end of the day, it is that key bottom-line growth in FCF that demonstrates the genius of CEO Hock Tan and has enabled the profound growth in Broadcom’s dividend to the current annual rate of $13/share: 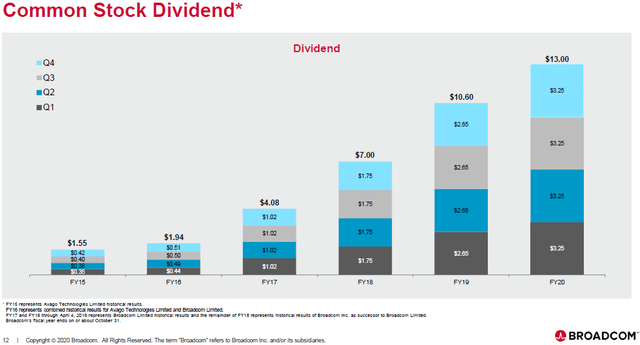 There was a good exchange toward the end of the Q3 conference call between Harlan Sur (an analyst at JPMorgan (NYSE:JPM)) and Broadcom CFO Tom Krause:

… If I look at the free cash flow for the first nine months of the fiscal year and your EBITDA guidance for Q4, sort of back of the envelope, I’m coming up with free cash flow growing year-over-year to around $11.5 billion for the fiscal year, which would imply that the team should be in a position to raise the dividend to at least $14 or probably more from December of this year. Number one is, am I in the ballpark? …

No. Harlan, I think your math is fairly spot on. I think, we clearly are going to assess the dividend at the end of the year. But, keep in mind, we are in a recession, we’re still dealing with COVID, we’ve got an election coming. And so, I think we want to wait. And obviously, until we get to the end of the year, talk to the Board, look at the outlook for ’21 before we jump to any conclusions.

The bottom line here is that it would appear that a $1/share increase in the annual dividend to a rate of $14/share is certainly possible. If so, that would be a 7.7% increase, and would give a forward yield of 3.8% based on Monday’s $366.10 close.

Amid COVID-19 delay and strong 5G order growth, and continuing strength in networking, Q4 and Q1FY21 are expected to be strong. On the Q3 conference call, CEO Hock Tan said:

So, in summary, our semiconductor solutions segment was up 5% sequentially in Q3. And given the continuing surge of demand in networking and expected 5G phone ramp in wireless, we expected a mid-teens percentage sequential increase in our fourth fiscal quarter. We should know, on a year-on-year basis, Q4 will mark a return to growth for semiconductor segment overall, which we think is a key inflection point for Broadcom and which we expect to sustain into Q1.

I tried to find a company with a faster dividend growth rate over the past five years than Broadcom and could not do so. If anyone knows of one, please leave a comment. But I did find an article in Investor’s Business Daily that put Broadcom at the top of the list:

Note Broadcom’s 3x greater return as compared to the S&P 500 with a yield still more than 2x the yield of the S&P 500, despite the growth in the stock price.

Interestingly enough, in my research on the best dividend growth stocks, Broadcom is typically left off the list. For example, see this list of “dividend aristocrats”, or this list from Barron’s. Broadcom is nowhere to be found.

The primary near-term risk for Broadcom would likely be the potential for a pullback in networking or 5G orders due to pressure on the global economy as a result of the COVID-19 pandemic. While that seems unlikely to affect Q3 or Q4 (considering Hock Tan’s comments mentioned earlier), it could become an issue that would possibly affect 2021 earnings should the Fall flu and holiday season result in a big wave of new infections in the US and/or elsewhere.

Secondly, for Broadcom to keep growing revenues and the dividend at the rate it has in the past, it will require excellent organic growth, which it does have some control over, and more big M&A deals. And that could become a problem considering the scrutiny big-tech is under in the U.S. and the EU. An article in the Wall Street Journal this week reported a House Panel Says Big Tech Wields Monopoly Power. The article discusses a 16-month House Antitrust Subcommittee inquiry into the power of Amazon (AMZN), Facebook (FB), Apple (AAPL), and Alphabet (GOOG) (NASDAQ:GOOGL).

While Broadcom was not mentioned in that article or the House probe, semiconductor companies in the past have come under intense scrutiny. Qualcomm (QCOM) was hit with a $850 million fine because of an antitrust probe in South Korea for its dominant position in LTE chipsets and for refusing to provide patent licensing for competitors (note South Korea is the home of QCOM competitor Samsung (OTC:SSNLF)). In a separate matter, Qualcomm is currently being investigated by an EU antitrust probe for its 5G chipset business.

And TechCrunch reported Wednesday that Broadcom has settled an antitrust probe by the EU over what it said was anti-competitive behavior with respect to pricing for SoCs for TV set-top boxes, and various modem products. To settle the suit, Broadcom agreed to suspend all existing agreements containing exclusivity or quasi-exclusivity arrangements and/or leveraging provisions related to these products.

There are two points to consider with respect to how these antitrust issues could affect Broadcom:

It is the second impact – making M&A deals potentially more difficult – that likely poses the bigger hurdle for Broadcom. That said, note that Broadcom’s last three acquisitions have all been software companies, and the company is still a relatively small fish in the world of enterprise software where it competes against large companies like Oracle (ORCL), Microsoft (MSFT), and salesforce.com (CRM). In addition, there are many sub-sectors within “software” that Broadcom could exploit (AI, cloud, workload automation analytics, etc.) where there are a plethora of competitors. That said, any large deal that Broadcom embarks on – whether it be in semiconductors, hardware, or software – will certainly come under more scrutiny than in the past due to the current atmosphere over “big tech” in the U.S., Europe, and elsewhere. And let’s face it, due to Broadcom’s history of successes, it is a much bigger and better-known company than it was in the past.

Driven by Hock Tan’s excellent M&A track record, Broadcom is one of the best – if not THE best – dividend growth companies in the entire S&P 500. The company has grown its annual dividend from $1.55/share in FY15 to the current $13.00/share. Meanwhile, the share price has tripled over the past 5 years (see chart below).

But the stock is not just attractive for the dividend growth and yield. As I pointed out in my last article on Broadcom, the company has strong tailwinds in multiple business lines including networking, 5G, IoT, AI, and infrastructure software (see Broadcom: Software Bets Payoff, AI Up Next). So the future bodes well for both dividend growth and capital appreciation. Meanwhile, the stock trades at a forward P/E=16.6, quite reasonable as compared to the overall market – especially in light of the company’s superior total returns over the past five years.

I’ll end with a chart of the five-year performance of the stock: 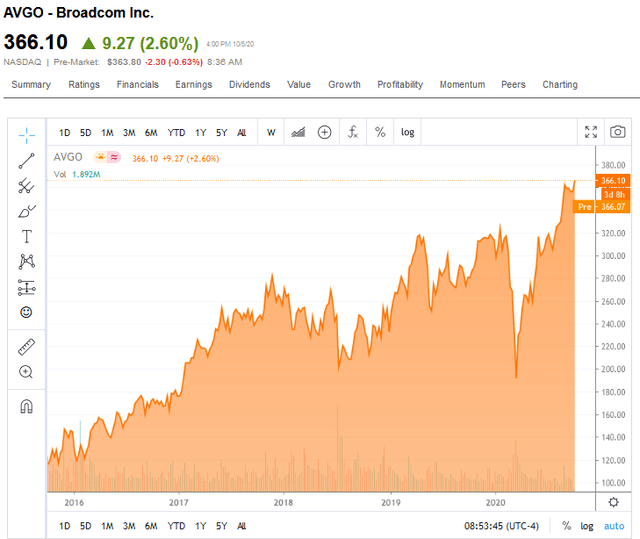 Disclosure: I am/we are long AVGO. I wrote this article myself, and it expresses my own opinions. I am not receiving compensation for it (other than from Seeking Alpha). I have no business relationship with any company whose stock is mentioned in this article.