Briggs & Stratton: Looks Like I’m The Patsy At The Poker Table (NYSE:BGG)

For context, in this piece, I write to share my research on Briggs & Stratton (BGG). I have had BGG on my watch list since Q4 2019, but never had a reason to buy it, until last week. What got me off the sidelines was when I saw the SA news headline that Briggs & Stratton teamed up with Ingersoll Rand Inc. (IR). As Ingersoll Rand is a highly regarded company, I was super intrigued by this partnership as one could argue it showcases BGG’s valuable IP and that IP has value outside of traditional engines. 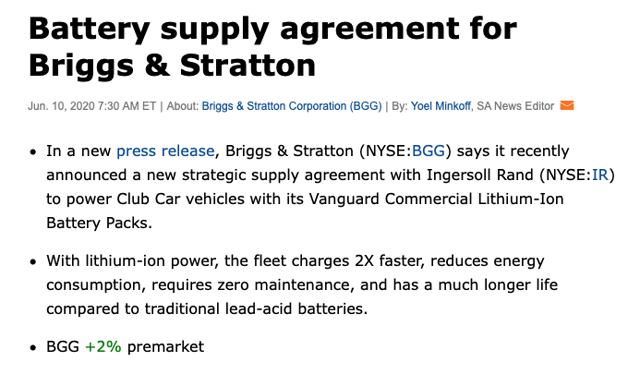 The situation, albeit briefly, appeared to be turning around on June 15, 2020, when Morgan Stanley (NYSE:MS) filed a SC 13G that they own a 5.3% stake in Briggs & Stratton’s equity. This news alone could have been a catalyst for BGG to catch a bid, especially given the short interest. 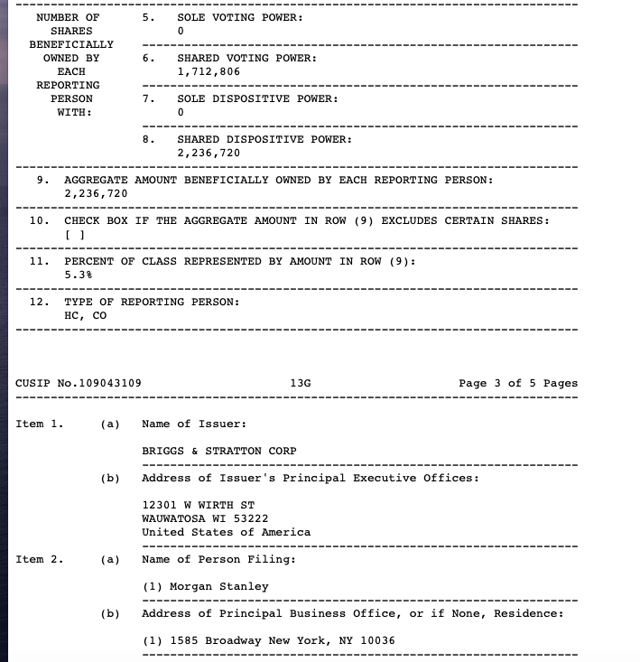 However, literally, within less than one hour, a new BGG 8-K was filed soon after the SC 13G (see here).

After I read the 8-K, I realized that I was the ‘patsy’ at the Briggs & Stratton poker table. 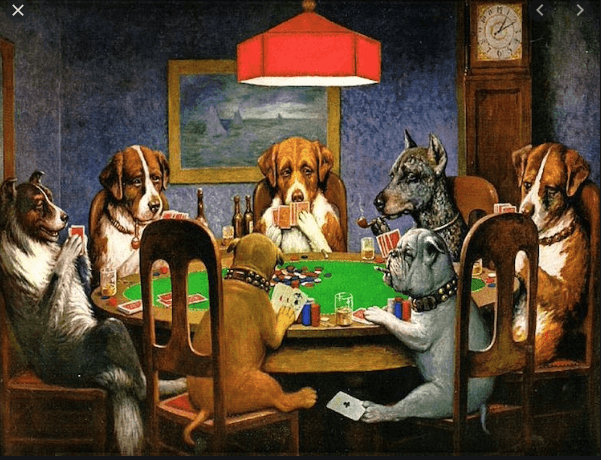 Moreover, BGG’s board of directors had the audacity to approve $5.125 million in cash retention bonuses. An amount nearly equal to the unsecured bond payment that BGG’s board just elected to put off for 30 days! The optics of skipping the debt payment but paying a management team that has performed poorly are terrible!

For any SA readers currently long shares of BGG, enclosed below was my thought process for getting long (again, however, I sold my shares at $2.02 due to management and BGG’s board of directors’ June 15, 2020 8-K). Although this was always a speculative bet, there was a plausible pathway for this to work.

Briggs & Stratton manufactures four-cycle aluminum alloy gasoline engines with gross horsepower ranging from 2.5hp up to 40hp and torque ranging from 4.50 ft-lbs gross torque to 21.00 ft-lbs gross torque. The Company’s engines are used primarily by the lawn and garden equipment industry, which accounted for 89% of the Engines segment’s fiscal 2019 engine sales to OEMs. Major lawn and garden equipment applications include walk-behind lawn mowers, riding lawn mowers, garden tillers and snow throwers. The remaining 11% of engine sales to OEMs in fiscal 2019 was for use on products for industrial, construction, agricultural and other commercial and consumer applications that include portable and standby generators, pumps and pressure washers.

The Company’s engine sales are primarily to OEMs. The Company’s major external engine customers in fiscal years 2019, 2018 and 2017 were MTD Products Inc. (MTD), Husqvarna Outdoor Products Group (HOP), Deere & Company, and Power Distributors, LLC. Engines segment sales to the top three customers combined were 44%, 42% and 47% of Engines segment sales in fiscal 2019, 2018 and 2017, respectively. Under purchasing plans available to all of its gasoline engine customers, Briggs & Stratton typically enters into annual engine supply arrangements. In certain cases, the Company has entered into longer supply arrangements of two to three years.

The Company believes that in fiscal 2019 approximately 71% of all residential lawn and garden powered equipment sold in the United States was sold through mass merchandisers such as The Home Depot, Inc. (The Home Depot), Lowe’s Companies, Inc. (Lowe’s), Sears Holdings Corporation (Sears) and Wal-Mart Stores, Inc. (Wal-Mart). Given the buying power of the mass merchandisers, Briggs & Stratton, through its customers, has continued to experience pricing pressure; however, the development of new and innovative products may assist the Company and its customers in realizing higher margins. The Company believes commercial engines are mainly sold through independent dealer networks.

The Company’s major competitors in engine manufacturing are Honda Motor Co., Ltd. (Honda), Kawasaki Heavy Industries, Ltd. (Kawasaki) and Kohler Co. (Kohler). Several Japanese and Chinese small engine manufacturers, of which Honda and Kawasaki are the largest, compete directly with the Company in world markets in the sale of engines to other OEMs and indirectly through their sale of end products.

The Company believes it has a significant share of the worldwide market for engines that power residential outdoor equipment.

BGG breaks out its business into two segments: Engines and Products. The company shares with investors gross margin dollar and segment income levels for these two groups. 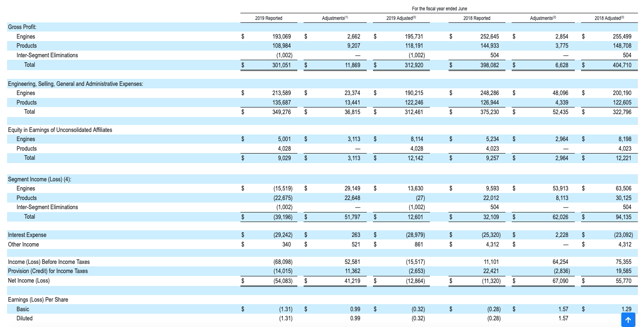 This is a seasonal business and despite the continued struggles in FY 2020 (Q1-Q3), BGG generates a lot of positively working capital in Q4.

Despite a weak Q4 FY 2019, cash flow from operations improved by $70 million. This cash flow pick-up is largely due to the positive seasonal working capital swing in Q4.

YTD, BGG shares are down 68%, while Toro is down 16% and John Deere is down 13%. The other three are up, but those are more indirect proxies for lawn and garden demand.

Anecdotal reports suggest that the lawn and garden business has been on fire since mid-May 2020 (so that favorable commentary and consumer demand pull wasn’t captured on the May 7th conference call). 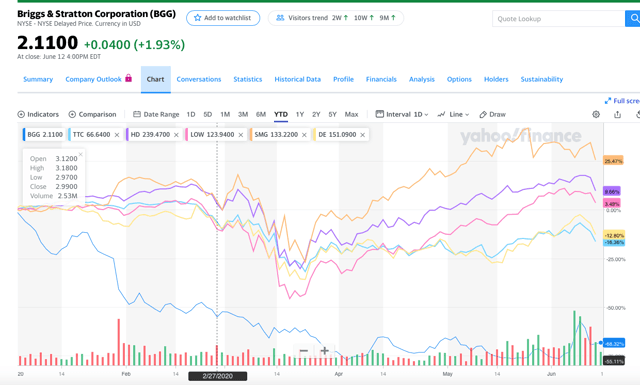 The Debt And Where the Bonds Are Trading 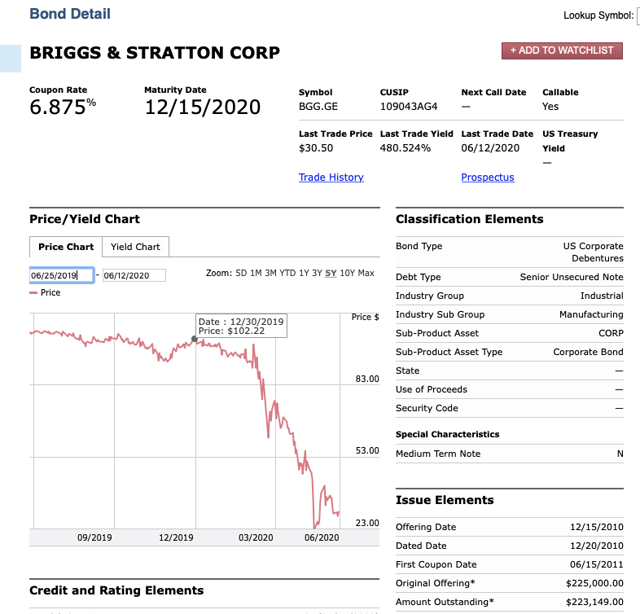 This amendment suspends the fixed charge coverage until July 26, 2020, and increases the Credit Agreement to $300 million.

The Amendment No. 4 amends certain provisions of the Existing Credit Agreement to, among other things, (A) during the period commencing on the effective date of the Amendment No. 4 and ending on July 26, 2020, (I) suspend the requirement that the Company maintain a consolidated fixed charge coverage ratio of no less than 1.0 to 1.0 whenever its borrowing availability under the revolving credit facility is less than $50 million and (II) instead require the Company and its subsidiaries to maintain at least $12.5 million of borrowing availability under the revolving credit facility; (B) increase the amount that the Company and its subsidiaries may borrow outside of the Credit Agreement to an amount equal to the greater of $300 million and 22.5% of the Company’s consolidated total assets (this amount is in addition to amounts borrowed pursuant to specific exceptions under the Credit Agreement); (C) reduce the maximum aggregate amount available for borrowing or letters of credit under the revolving credit facility that the Existing Credit Agreement contemplated by $25 million to $600 million; (D) increase the applicable margins paid to lenders as part of the variable interest rates for both LIBOR and base rate borrowings by 100 basis points in each case; (E) incorporate a LIBOR floor equal to 1.0%; (F) add certain events of default, including with respect to raising capital; and (G) impose certain financial, operational and liquidity maintenance and reporting obligations on the Company.

In a nutshell, the power equipment end market is moving away from gasoline power to electric (think Echo products that are battery powered). 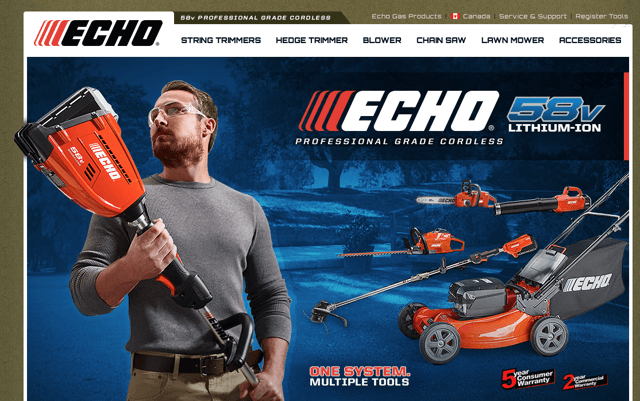 So at the residential level is a trend that caught Briggs & Stratton flat-footed. At the industrial/commercial level, I find it unlikely that battery-powered products would have same effectiveness (think torque and duration between charges) as gas-powered.

Given the poor and deteriorating outlook and the timing on the debt rollover, or lack thereof, the shorts have piled on. 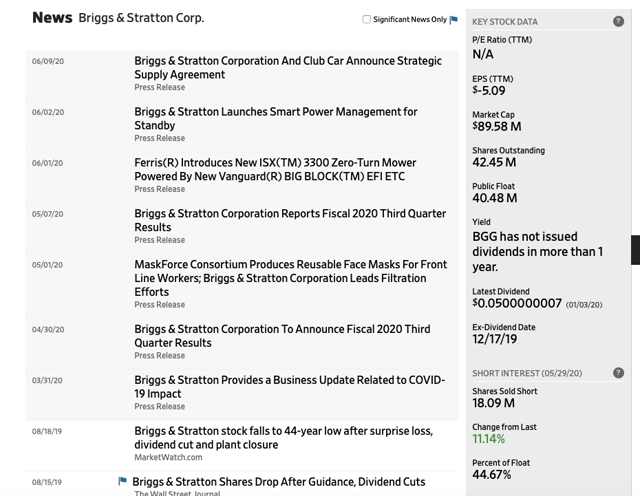 You never hear much about Briggs & Stratton’s generators.

Here is a snapshot of their product line. 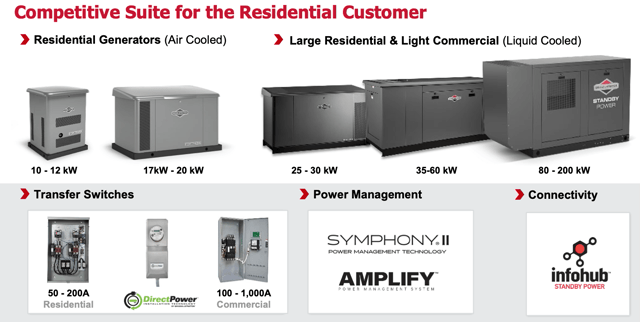 I am really excited about the ‘Vanguard Battery Systems’ as a big growth avenue.

Here are some of the target markets and the total addressable market is $12 billion. 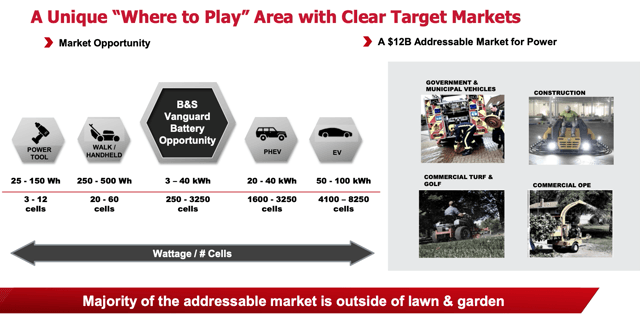 Management said they are in active talks to divest some businesses. A sell-sider (from Raymond James) asked if they are still targeting $200 million. Per management, they are ensuring they are getting a good price as opposed to giving the business away. 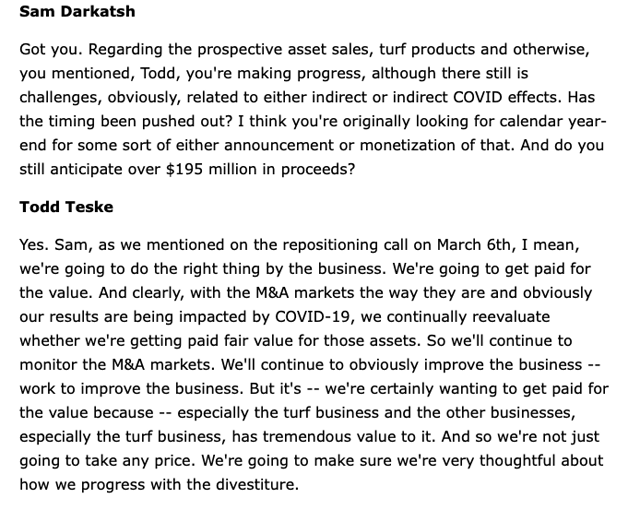 Putting It All Together

We have a high stakes game of poker. The shorts are super short at 43% despite only a $90 million market capitalization. Briggs & Stratton has been around for well over 100 years and it is a trusted brand. The company has been actively streamlining costs, and owns a valuable generator business and lots of growth potential for the battery business (in the out years 2021 and beyond).

This isn’t a mall-based women’s apparel business. I think this is a unique bet, but again, very binary and highly risky.

My Briggs & Stratton misfire is a good reminder that you need to do a lot of homework on a company’s management team when you are trying to traverse the rugged turnaround terrain. Anytime you have sizable debt due in less than 6 months (due to the ABL Springing on 9.15.2020) and a high short interest, you really have to be comfortable that management is fighting for its shareholders. Unfortunately, this management team had the audacity to put out a glossy headline, on June 9th, about its Ingersoll Rand partnership and then on June 15, 2020, it elected to skip the $6 million interest payment on its unsecured bonds (and yet the board approves over $5 million in cash bonuses). You can’t make this stuff up!

This was an interesting setup, but clearly I sized it too aggressively. Therefore, I took my medicine (losses), a 22% loss in this case and moved on.

Despite this loss, I am still up 19.7% this year (year to date through June 17, 2020). So I chalk this up as another good learning experience on risk management, position-sizing, and evaluating management teams. Finally, when you realize you are the ‘patsy’ at the poker table, it is time to fold your hand.

Source: The Fidelity Performance Tab for my portfolio

Second Wind Capital is a catalyst-driven/trading-oriented service with an underpinning tied to value and out of favor sectors. The hold period can range from a few days to up to six months (sometimes longer if my conviction level for a particular thesis is elevated and fundamentally and tangibly intact). Risk management perimeters will be set based on position-sizing and/or stop losses. No one bats a thousand, so if you can get it right 51% of the time and you manage your risk, you will generate outsized returns. Join now with a 2-week free trial and follow my real-time porfolio.