Years of higher than expected immigration, a strained relationship with Brussels and an impending referendum to take back control of borders.

On Sunday, the Swiss will go to the polls to vote on an issue as critical to their country’s relationship with the EU as the Brexit negotiations are to the UK’s future ties with Brussels: whether to maintain existing freedom of movement arrangements with their neighbours, or, as the referendum proposes, for Bern to decide who should be allowed in.

Switzerland holds referendums regularly. The Begrenzungsinitiative — limitation initiative — on Sunday is one of five on the ballot. It is by far the most consequential.

A “yes” vote would result in the immediate cessation of six other critical bilateral arrangements with the EU, which are tied by treaty to free movement. These include measures on air and land freight, standards in medical and scientific equipment, and rules on public procurement.

A “yes” vote would more than double the cost of sending German and French goods into and out of Italy across the Swiss alpine rail network. It would shut Switzerland’s huge medical equipment industry out of Europe.

But more important, “yes” would also torpedo continuing negotiations with the EU over the “framework agreement”: the overarching diplomatic package to which all of Bern’s 210 existing bilateral agreements with Brussels — many of which are set to lapse imminently — are to be tied in the future. The EU wants an agreement in place as soon as possible. Bern has so far dragged its feet, arguing the outcome of Sunday’s referendum must be heard first.

“A vote ‘yes’ for the Begrenzungsinitiative is a clear ‘no’ to the framework agreement,” Thomas Aeschi, the parliamentary leader of the populist Swiss People’s party (SVP), told the Financial Times.

Mr Aeschi takes pains to play down any similarity to Brexit. Switzerland is not in the EU, he points out. But many of the arguments he cites are familiar. “Immigration has been much higher than predicted . . . it’s a big strain. We are a relatively small country. More and more people put more strain on infrastructure, while Swiss people are pushed out of the labour market,” he said.

When Switzerland agreed its current open-borders arrangement with the EU, it was expected that a net of 8,000-10,000 immigrants would arrive in the country annually. In the past 13 years, a net 1m migrants have arrived.

The framework agreement would cede even more control to Brussels, the SVP argues. Posters have appeared around Switzerland in recent days of an ample posterior — clad in bulging jeans held up with a blue belt studded with yellow stars — sitting on Switzerland, which is cracking beneath it.

Many Swiss are receptive to such messages. In 2014, 50.3 per cent of voters in a referendum approved a proposal to limit immigration with Europe. Brussels threatened to scrap bilateral deals as a result. The Swiss parliament struck a compromise, to allow all immigrants with the promise of work into the country. Many still believe it was a compromise that did not honour the result of the 2014 vote.

Yet current polling suggests that the Begrenzungsinitiative will be comfortably defeated on Sunday. 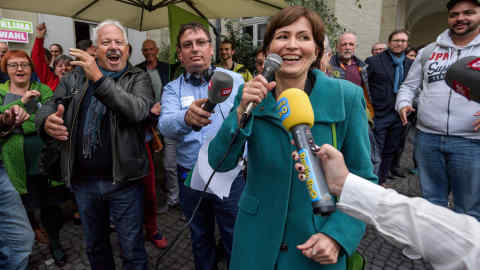 “The latest polls show a ‘yes’ vote of around 35 per cent,” said Lukas Golder, president of pollster GFS Bern. Crucially, just 2 per cent of respondents on September 6 said they were still undecided.

“A majority of Swiss would like control of immigration and to have more sovereignty versus the EU, but most are also practical . . . they want to negotiate with Europe,” he added.

Economic, political and technical arguments have resonated with Swiss voters, Mr Golder believes. “There has been a quiet shift to the centre.” Several factors have played a role, Mr Golder said.

Switzerland’s peculiar and highly devolved political model has long limited the momentum behind protest voting. There are popular referendums every few months. The governing seven-person cabinet has, by tradition, members drawn from the four largest parties — including the SVP. It has been hard, therefore, to cast the Begrenzungsinitiative as a strike against an out-of-touch political elite.

Switzerland’s strong economy has also been a brake on populist appeal: the SVP surged after the 2008 crisis, but its popularity has stalled more recently. Last October it lost seats in parliament for only the second time since 1975.

Finally, and perhaps most decisively, headlines about the state of the UK’s trade negotiations with Brussels have been prominent in the Swiss media in recent weeks.

Mr Golder said that a purist approach to sovereignty “is no way to negotiate with the EU. Brexit made this point extremely clear to many people in Switzerland.”

Nevertheless, the size of the “yes” vote on Sunday will be crucial. “There is no winner-takes-all in Swiss politics,” said one European diplomat in Bern. The Swiss government will treat the initiative as a referendum on bilateralism, they believed. Because Bern does nothing without consensus, the result will be critical in deciding how quickly, if at all, a framework agreement can be agreed.

“With a vote of 44 or 45 per cent, the government will not proceed with the framework agreement,” said Mr Aeschi. That would be a victory for the SVP. Like many pro-Brexit politicians in Britain, Mr Aeschi believes a harder line will aid Switzerland’s negotiating position.

“The EU says if we do not agree something then they will let all the existing bilateral agreements ‘erode’. But Switzerland is their third largest export partner. It’s in their interest to have a good relationship with us. We’re not a troublemaker.”