It is way too early to make any calls on the UK’s December 12 snap elections. And even in the much simpler-to-assess Brexit referendum, not only were the polls wrong, but some expert commentators were privately calling it for Remain by 6 to 7 points the evening before the vote. So while these snapshots, the first from the Evening Standard, give a picture of overall dynamic, the election fight has just started. 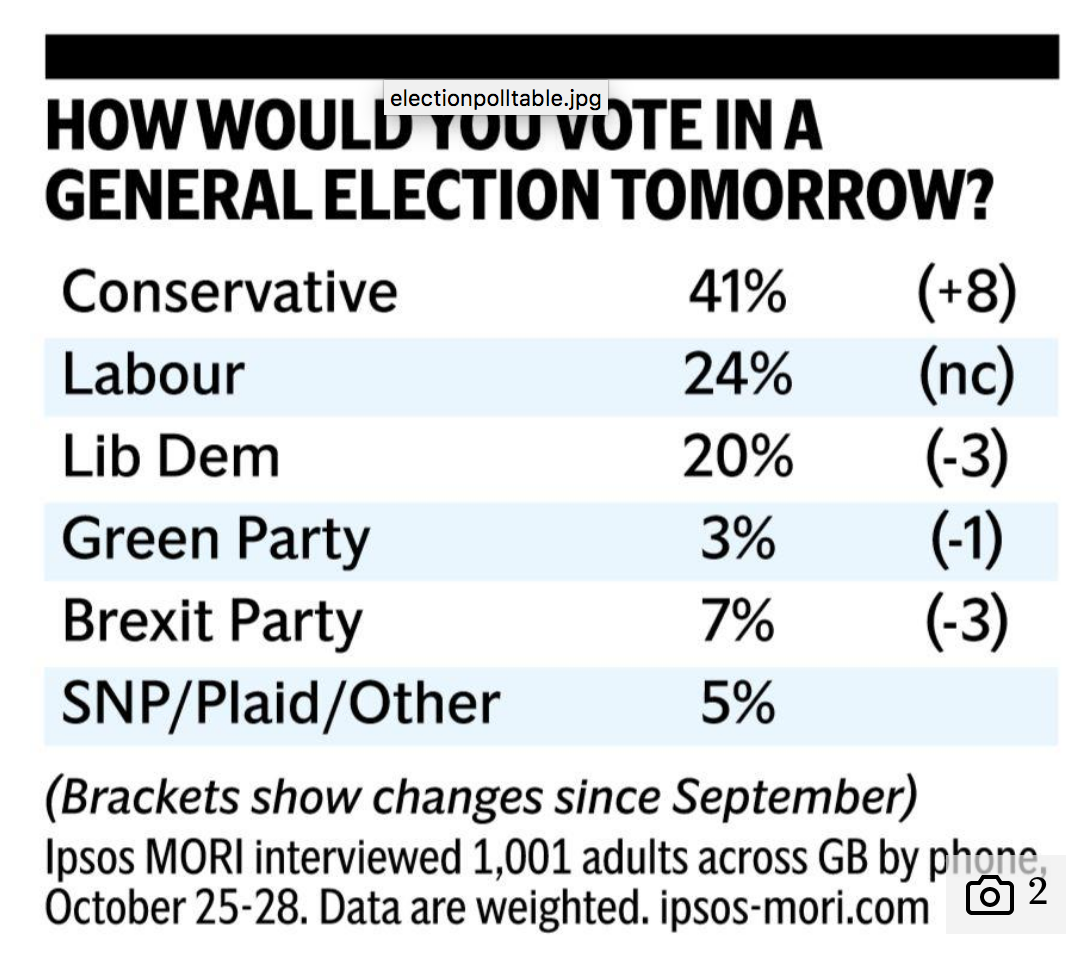 Based on national polls, there appears to be way too much tacit acceptance in the press of the fond hope of the Tories, that the general election will result in the Conservatives getting a majority that will enable them to vote through Brexit legislation and then Johnson’s deal by January 31. Let us stress that the many tactical/electoral map issues are way way beyond our grasp, and we hope that readers will chime in with further observations.

However, as much as Labour now looks set to take losses at the hustings, that does not necessarily imply a Tory success. For instance, Theresa May looked set to strike a fatal blow to Labour when she called her snap election with a 22 point lead, wider than Johnson’s with his recent uptick. All major parties and all major candidates (save perhaps Nicola Sturgeon and the SNP, which wasn’t included in a recent YouGov poll) show significant net disapproval ratings, with Jeremy Corbyn looking the most damaged of the party leaders. That plus the timing of the vote for December looks like a prescription for lower-than-normal turnout, with voters with strong views more likely to participate. But how does that shake out on a district by district level?

This YouGov poll highlights one wild card, the preference of the young for Labour and the LibDems over the Tories, as voter registration has upticked among 25 to 34 year old and under 25 year old voters:

Two recent articles argue that the Johnson snap election gamble is far more perilous than it seems. The first, by Glen O’Hara, Professor of Modern and Contemporary History at Oxford Brookes University, points out that the last two general elections called by Tories in the winter, by Stanley Baldwin in December 1923 and Ted Heath in February 1974, ushered in minority Labour governments. His take:

Johnson has taken a huge gamble….net scores of -18 and -67 are the worst on record for a new leader and government at this stage. After nearly a decade of public sector austerity and stagnant wages, Johnson is asking the people to give the Conservatives another go. He is asking for a lot.

There are several other reasons to question the prevailing wisdom that he will make it back to No. 10 with a majority big enough to carry his Brexit deal through without further alarm. The first thing to make clear is that the electorate for a General Election is not the same as the Brexit electorate: June 2016’s Leave vote relied to some extent on very marginal voters who may well not make it back to the polls again (or, if they do, will vote for Nigel Farage’s Brexit Party). If Remain voters decide again to coalesce around Labour as their least-worst option – and there is a lot of evidence that they did just that in 2017 – the Government will be in trouble.

The Conservatives are faced with a three-pronged pincer movement that may see Leave cornered by the reinvigorated ranks of Remainers. They will almost certainly lose seats to the Scottish National Party in Scotland, and they are very likely indeed to lose wealthy, culturally liberal and very pro-Remain seats in the South of England to the resurgent Liberal Democrats. Let’s assume, very roughly but credibly, that they lose seven or eight of their Scottish MPs. And then another thirteen or so fall to the Liberal Democrats. That’s twenty – or a few more – losses before the Conservatives have even made a start.

If he is to reach a bare absolute majority Johnson then has to make up all of those, and then win ten more seats, from Labour. Granted, Labour are wallowing low in the polls at the moment, but this seems like a huge ask. It means winning a seat such as Reading East – a constituency that Labour won from the Conservatives last time, is experiencing rapid demographic change as younger and more liberal voters move out from London to take advantage of its rapid train link into the capital, and one where it’s estimated that more than 60% of the electors voted Remain in 2016.

Yes, there are lots of Labour seats containing many more Leave voters, and some of them – Dudley North, Barrow and Furness, Ashfield – might well fall to the Conservative advance in poorer, more blue-collar and traditionally Labour parts of the country. But are there enough of them, when Labour waverers will be coming home to the party, as very old and deep ties to the culture and idea of Labourism will stir, and as Labour and its more than 400,000 members begin to assert themselves on the electoral battlefield? That is a much more open question.

Although first days do not dictate the course of an election, Corbyn appeared in good form today, seeking to make the election about broader economic issues, depicting the Tories as representing the “privileged few” and touting Labour policies like free prescriptions and eliminating university tuition fees. Per the Guardian, Corbyn is depicting Brexit as a sellout:

And when he promised Labour would not open up the NHS to US corporations as part of a free trade deal with Donald Trump’s White House, his audience repeatedly chanted: “Not for sale! Not for sale!”

Amusingly, Trump indirectly confirmed Corbyn’s talking points and gave him a boost by trash-talking him and praising Johnson in a chat with Nigel Farage:

Mind you, Corbyn is also selling his own Brexit unicorn, that he’d get things sorted out with the EU in six months, including a new deal and a confirmatory referendum.

The message is unmissable – Brexit is to be side-lined with the agenda turned to the schools ‘n’ hospitals and all the dog whistle issues that make up standard election fare.

And even some Labour fans are tearing their hair over the party’s continued Brexit waffling:

Labour’s Brexit policy is batshit. Corbyn is refusing to tell us which way he’d vote in a future referendum on the biggest issue facing the country. He’s going to spend the campaign giving a “no comment” interview. This is the future of the country, not 24 Hours in Police Custody

On the Brexit party side, readers speculated earlier that in a general election scenario, Farage and Johnson might do a deal, with the Tories standing aside in some constituencies to let the Brexit party have a shot (or perhaps more accurately, assure that they didn’t divide Leave voters and produce a Labour or LibDem winner). In the Trump interview, the president urged the Tories and the Brexit Party to “get together.” But the Brexit Party’s selling points include that they are the hardest-core Leavers, and that Johnson didn’t live up to his “die in a ditch” promise for delivering an October 31 Brexit.

The Guardian depicts Brexit Party leadership as not having settled its campaign strategy:

The Brexit party chair, Richard Tice, has said the party has vetted 600 candidates so far and hopes to run in up to 650 seats.

Farage is said to be in the middle on the strategy in terms of numbers. Others are urging for caution and suggest working on a much-reduced list of target seats in case they split the Brexit vote and threaten the chance of Britain leaving the EU.

Keeping the threat of fielding a big roster alive may be a way to induce the Tories to make an offer.

Craig Murray believes that the Tories will lose the upcoming election. He starts by describing how the BBC made Farage famous because his message that inequality was due to immigrants, not billionaire looting. And it’s now going to be difficult to make him go away:

The Brexit Party is a fundamental threat to Boris Johnson’s strategy of moving the Tory Party decisively to the hard right and attempting to win seats on the back of working class anti-immigrant votes in the Midlands and North of England. More liberal Scottish, London and South Western Tory voters have been deliberately abandoned, and consituencies sacrificed, in order to chase hard racist votes. Those indoctrinated to hate their fellow man if he has a Polish accent, are now required by the elite to vote Tory, not to vote for the Brexit Party.

The remarkable result of this is that, at precisely the point where Farage’s influence will be most crucial in determining the future of politics in the UK, he has been dropped by the media…

I am happy to state with confidence that this election will backfire on the Tories. The strong evidence from both the 2017 election and the Scottish referendum campaign, is that once broadcasting rules on equal time come into play, the impact on voters is profound of hearing direct from normally derided people and their normally ridiculed arguments.

The Johnson/Cummings electoral strategy is catastrophically bad. First past the post rewards regional voter concentration. Cummings plan is to sacrifice votes in traditional Tory areas in order to pile them up in traditionally hostile areas. The result will be to even out their vote, lose regional concentration and lose the election. They can pile on two million racist votes in traditional Labour constituencies without gaining more than a dozen seats. That will merely cancel out losses in Scotland. That people en masse are going to forget the devastation of their communities by Thatcher or the generations of fight for a decent living is far from probable. The antipathy to the Tories in parts of the UK is not “tribal”, it is the result of generations of hard experience.

The Brexit Party may have more appeal than the Tories in traditional Labour consituencies, but neither they nor the Tories will win any significant number of them. It is in the marginals of the Midlands and Lancashire where the Brexit Party may damage the Tories’ chances, not in Sunderland and Hartlepool which will stay Labour. The SNP is going to sweep Scotland, the Liberal Democrats make substantive gains in London and the South West and the Labour Party will do much better in London and the North than anybody now expects. The Midlands, both East and West, are hard to predict and the key battleground, but the number of possible Tory gains is not enough to compensate for their losses elsewhere. The Tories could end up with the largest share of the vote, perhaps 36%, but less seats than the Labour Party. That is what I expect to happen.

If this conclusion is correct, and Labour wins up leading a coalition government, what happens next depends a lot on where the coalition partners decide to flex their muscles. For instance, the LibDems are pretty conservative economically, and so would constrain Labour’s ambitious plans. As for Brexit, it’s hard to know what Corbyn, who is leery of the EU, would do if the election shook out so as to look to back Remain. Or, as Murray suggests, the Tories actually win a majority of votes, meaning Brexit is still what voters presumably want, but fail to win the Parliament.

In other words, the next six weeks may be a wilder ride than anticipated. Stay tuned.