Sterling shed nearly 1 per cent of its value against the US dollar on Monday and futures markets were braced for a rise in volatility, after Brexit risks returned to haunt the UK currency and put a stop to a strong summer run.

The pound slumped to $1.3161 by early afternoon on Monday, losing 0.91 per cent against the dollar after the Financial Times reported that the UK government was planning legislation that would override keys parts of the withdrawal agreement. The currency also slipped 0.8 per cent lower against the euro.

The losses come after a strong performance for the currency during the summer, when traders largely ignored Brexit-related headlines and cheered the pound’s move higher against the struggling dollar. The pound has gained about 4 per cent against the dollar since June.

But sterling has been jolted by the UK’s threat to put the trade talks at risk, causing a rise in expectations for volatility in exchange rates for the rest of the year. The eighth formal round of talks between the two sides begins on Tuesday.

“The Brexit heat is back on and sterling is, in our view, unprepared,” said Petr Krpata, a currency strategist at ING Bank in London.

UK prime minister Boris Johnson said on Monday that if a withdrawal agreement was not reached with the EU by October 15 then both sides should “move on”.

Until recently, derivatives markets suggested that traders were unworried about the looming December 31 deadline, when a standstill agreement expires and the UK leaves the EU’s single market and customs union.

But the price of contracts that pay out if sterling’s exchange rate becomes more volatile surged on Monday, with the three-month contract hitting its highest since late May.

Options markets have been reminded of the risk of the UK leaving without a trade deal, said Paul Robson, head of currency strategy at NatWest Markets. He said markets still expected a “relatively limited” agreement between the two sides.

“There is little discussion about a ‘no deal’ outcome, but I think most people realise that the chances of that happening is not zero,” he added.

ING’s Mr Krpata expects the euro to rise to £0.91 from about £0.899 this month and to edge higher still, perhaps reaching parity, if the two sides fail to reach a deal on trade. 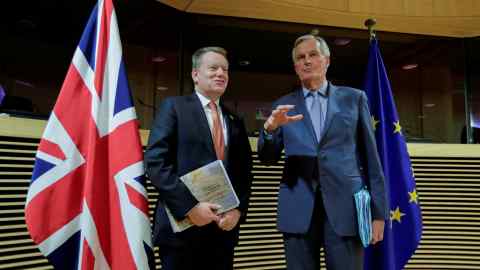 Seema Shah, a portfolio manager at Principal Global Investors, said headlines over the weekend were “a timely reminder that, while markets have been distracted by the UK’s struggle to rejuvenate its economy, Brexit negotiations have quietly been going nowhere”.

She said that in coming weeks foreign exchange traders would probably focus on the risks of a no-deal scenario, “punctuated by intervals of optimism that Johnson’s hardball strategy will be successful”.