Brazil’s government is poised to create an “Adopt a Park” programme to let the private sector pay to preserve chunks of the Amazon, as Jair Bolsonaro comes under mounting pressure to stop illegal deforestation.

Ricardo Salles, the country’s environment minister, told the FT the programme would give major investment funds a way to channel criticism of Brazil into concrete action.

He was speaking after more than two dozen international financial institutions in June warned that deforestation — which has surged during the Bolsonaro administration — had created “widespread uncertainty about the conditions for investing in or providing financial services to Brazil”.

Mr Salles said: “The Brazilian government’s response is: we have structured instruments for you, the funds, to come and help us take care of the Amazon. Participate, supervise, act together with us.”

The warning from international institutions sparked angst in Brazil’s private sector, where companies banded together to lobby the government to do more to protect the environment.

The “Adopt a Park” programme, first announced last month, is expected to be enacted next week. It will let national and international funds, banks and companies pay to preserve 132 areas, equivalent to 15 per cent of Brazil’s portion of the endangered ecosystem — an area larger than Chile.

Mr Salles said: “It is a concrete action that allows you to do something concrete for the Amazon, with the help of the government.”

Investors have reacted cautiously to the programme — Adote um Parque in Portuguese — and highlighted several concerns, including the difficulty of implementing it on a meaningful scale.

READ ALSO  Try out these Google features on your new iPhone

In addition, investors said the Brazilian government needed to first show success in stopping illegal loggers and wildcat miners from tearing down forest before they would offer more funds.

Jeanett Bergan, head of responsible investments at Norwegian pension fund KLP, which had signed on to the criticisms, said: “Entering into an investment mechanism like this is unlikely at this point as the results on the ground, in terms of deforested land and controversies, have recently developed negatively and therefore positive change is needed before this would even be considered.”

A portfolio manager at a European investment group said that while he personally supported the idea, “adopting parks” was unlikely to gain traction at an institutional level, because funds have a fiduciary responsibility, and such a programme would be akin to philanthropy.

One possible option, the investor said, was carbon credits, where the Brazilian government could “get rich” by maintaining the forest, capturing the carbon and selling the credits to wealthier nations.

Mr Salles said that rich countries had already promised to acquire carbon credits from poorer countries as part of the 2015 Paris climate pact, but protocols have “not been established” yet. 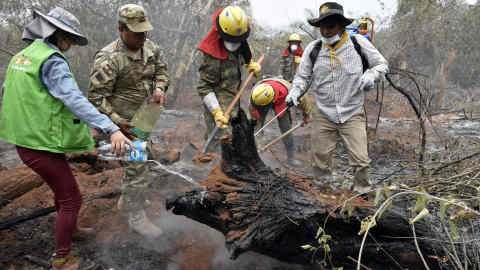 “How do you attract money to the Amazon rainforest if you don’t pay for environmental services? You have programmes like Adopt a Park. If companies don’t adopt, then who will really care?” he said.

Environmentalists blame crooked ranchers and land grabbers for part of the more than 3,000 sq km of Amazonian forest that was razed in the first six months of this year, up 25 per cent from last year, according to official data.

The land is then typically cleared using fire and converted into pasture to raise cattle. In July, the number of fires jumped almost 30 per cent from the same month last year when tens of thousands of fires ravaged the forest.