Out of the Gate

In case you’re wondering there’s still time to catch Aflac (AFL) before the price rises to fair value, which is roughly between $50 and $55.

That price target range is relatively conservative because it’s based on AFL’s 10-year average PE ratio which is between 10 and 11. I’ll show you that soon.

With AFL’s current price at roughly $43 investors can enjoy a discount of somewhere around 15 to 20% depending on their expectations.

Now you have something to work with, but let’s continue to dig in, and also zoom out to get the big picture. This is exciting.

We’ll take a minute to look at historical valuations and trends. The point is to make it easy to see at-a-glance that AFL is undervalued right now, even after a right price spike. 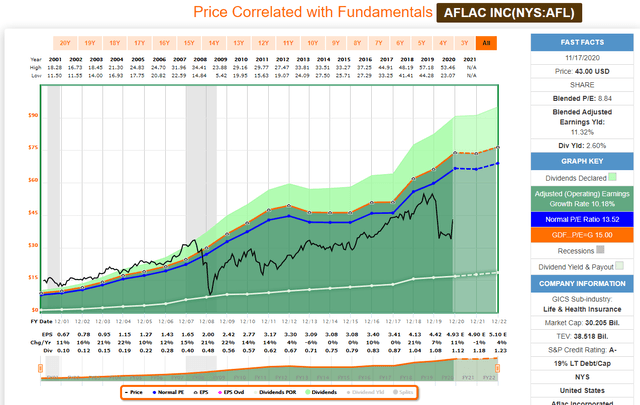 Take a look at the black line (price) versus the blue line (normal P/E ratio). Notice also that this is over a full 20 year period. If AFL blasted up to the normal P/E ratio of 13, it would be priced well over $65.

You’ll see that before 2008, AFL enjoyed a higher average P/E ratio. However, the Financial Crisis took the wind away from the duck, making it far harder for AFL to stay flying above the average market P/E ratio of 15. Since late 2008, AFL simply hasn’t been even close to a P/E ratio of 15.

Now, here’s what happens when we collapse our view down to just 10 years. 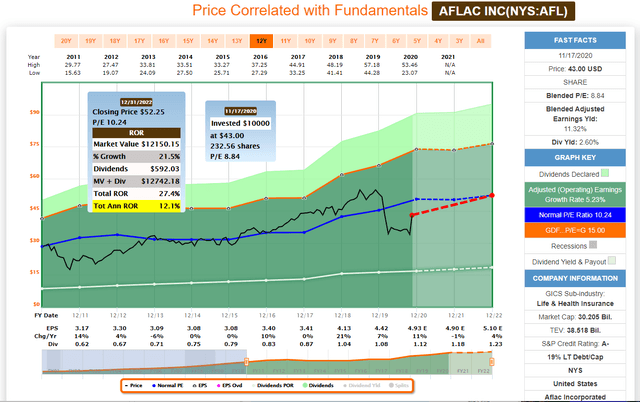 Actually, you’ll see that I selected 12 years. I like to do that since we’re looking at the previous 10 years plus the next two years.

The P/E ratio averages just over 10. You can therefore see the P/E compression from well over 13 down to just over 10.

Also, you can see that the estimated Total Annual Rate of Return in this graph is just over 12%, which includes capital appreciation and the dividend. I’ll talk more about that in a moment.

Thankfully, my back of the napkin calculations show that with some simple regression to the mean, from a current P/E ratio of just under 9 to just over 10, we’re getting a respectable return.

Here’s a quick summary at this point:

I am very enthusiastic about this breaking news:

As reported, the yield is now over 3% again as a result of this increase. And, this is exactly why Dividend Growth Investors like and perhaps even love this stock. It’s got wonderful growth. Let me prove it to you. 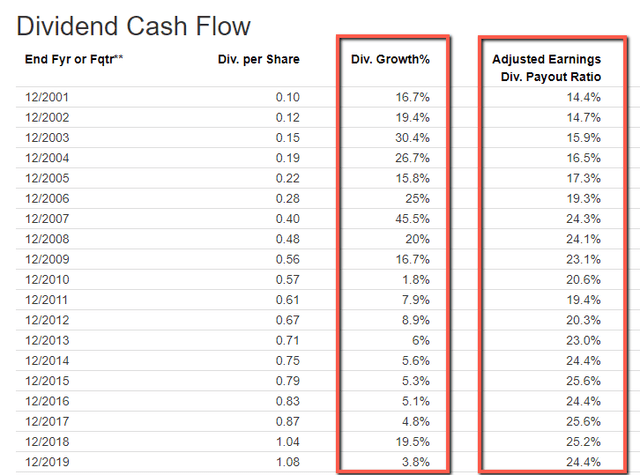 As I’ve highlighted, AFL’s dividend has gone up and up. The average dividend increase over this time has been an outstanding 15%. Given the current environment, with dividend cuts hurting income investors especially hard, this is a dose of good news.

I also want to point out the other column that I’ve highlighted. Namely, that this dividend is extremely well covered. The payout ratio – like the company – is quite conservative. With an S&P Credit Rating of A- there’s even more reason this “duck is a swan” whereby investors can sleep-well-at-night.

It gets even better because AFL has also been paying and growing dividends for over 35 years. It’s a Dividend Champion with a long history of success, rewarding investors for decades.

AFL rewards investors above and beyond dividends. As you can see, this duck is a cannibal, gobbling up shares via buybacks.

Here’s how Zack’s research explained this back in August 2020:

AFL board of directors recently authorized an increase in its existing share repurchase program in a bid to return more value to shareholders. This latest authorization will enable the company to buy back additional shares of up to 100 million. The increased authorization has left 121.9 million shares under the company’s existing share buyback program.

Aflac has bought back 15.2 million shares worth $637 million year to date, which includes 5.2 million shares bought back for $188 million in the second quarter. Continued share buybacks clearly hints toward the company’s sound capital position amid the ongoing coronavirus crisis, which has compelled most insurance companies to temporarily suspend their share buyback programs. Notably, repurchases are also likely to provide a boost to the company’s bottom line.

I’m highly encouraged by this news in addition to the growing dividend stream. Very often, buybacks are not accretive but instead destroy shareholder value since the stocks are overvalued. However, as I’ve indicated previously, I believe AFL is undervalued at this time so these buybacks add value as the shares are removed.

READ ALSO  Escape to the heritage heap: could you restore a derelict home?

The biggest risk I see with AFL is Japan. 70% of sales come from Japan and 30% come from the United States. However, leadership keeps a steady hand. I like what I hear from AFL CEO Dan Amos. Here’s a sample:

In every situation, Aflac carefully determines if potential benefits exceed possible consequences. We ensure that we are in fact taking a risk rather gambling resources, and we always make sure we are more likely to win than lose. It has been 50 years since I learned this enduring lesson in a classroom in Athens, Ga., but it is as sound today as it was then.

In the insurance business, it’s all about risk management, and elbow grease. AFL is conservative – sometimes I even think too conservative – but I’ll take that over cowboys and gamblers, like you see in Silicon Valley. I want a safe and steady hand on the wheel.

Although AFL is not on deep discount there’s evidence that it’s on sale. Furthermore, I conservatively estimate a rate of return around 12% over the next two years, supported by a P/E ratio regressing to the mean. That’s fueled by a growing dividend but also stock buybacks and strong leadership.

Investors who own AFL can feel comfortable holding or even adding at current prices. Dividend Growth Investors who do not own AFL may wish to invest to get a 3% dividend going forward, with an opportunity for P/E ratio expansion, and dividend raises for many more years to come.

Disclosure: I am/we are long AFL. I wrote this article myself, and it expresses my own opinions. I am not receiving compensation for it (other than from Seeking Alpha). I have no business relationship with any company whose stock is mentioned in this article.