BP Midstream Partners: A 12% Distribution Yield With A Solid Base For Growth (NYSE:BPMP)

The very high 12% distribution yield of BP Midstream Partners (NYSE:BPMP) stands out for actually being increased amidst the wave of Master Limited Partnerships reducing and, sometimes, even completely suspending their distributions during 2020, as my previous article discussed. Since a very high yield without the very high risk is rather abnormal, this article provides a follow-up analysis that reviews their third quarter of 2020 results as well as their prospects to provide further growth in the future.

Since many readers are likely short on time, the table below provides a very brief executive summary and ratings for the primary criteria that were assessed. This Google Document provides a list of all my equivalent ratings as well as more information regarding my rating system. The following section provides a detailed analysis for those readers who are wishing to dig deeper into their situation. 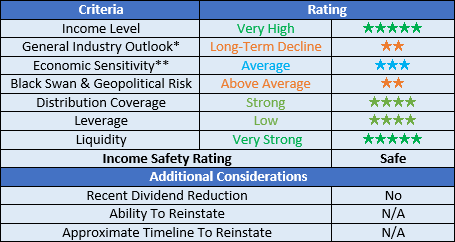 *There are significant short and medium-term uncertainties for the broader oil and gas industry. However, in the long term, they will certainly face a decline as the world moves away from fossil fuels.

**Whilst the oil and gas industry to which they service has high economic sensitivity, given the more stable nature of the midstream sub-industry, this was deemed to be average. 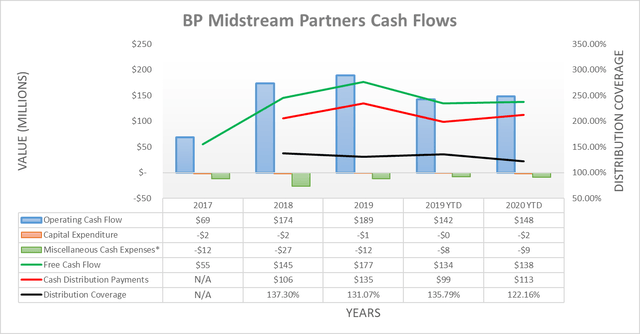 Instead of simply assessing distribution coverage through distributable cash flow, I prefer to utilize free cash flow since it provides the toughest criteria and best captures the true impact to their financial position. The main difference between the two is that the former ignores the capital expenditure that relates to growth projects, which, given the very high capital intensity of their industry, can create a material difference.

When conducting the original analysis, it was found that they have always provided strong distribution coverage, and if interested in further historical details, please refer to my previously linked article. Thankfully, this has not changed during the first nine months of 2020 with their distribution coverage still sitting at a strong 122.16% despite the tough operating conditions that eventually saw the midstream giant, Energy Transfer (ET), halve their distributions. Whilst this was down from 135.79% year on year, this was simply due to their new higher distribution payments with their free cash flow actually being $4m higher year on year. This continued resilient performance provides a solid base for potential growth moving into the future, plus also providing a margin of safety that keeps their distributions safe and sustainable.

Operating conditions appear to be rebounding lately with oil prices firming up to the mid-$40 per barrel range and, thus, should support their resilient financial performance during 2021, especially if the COVID-19 vaccines prove successful. Unfortunately, it is currently too early for management to issue guidance for 2021, but it nonetheless is still worthwhile to consider the consensus analyst earnings estimates, as the table included below displays.

It appears that the professional investment community is expecting no earnings growth during 2021 but possibly modest growth during 2022. Whilst their current strong distribution coverage provides a handy margin of safety, it still does not provide a sufficient scope to increase their distributions materially without jeopardizing their sustainability. This means that, in order to grow their distributions materially, they will first need to grow their earnings, and thus, their resulting free cash flow. Since they are a relatively small partnership with just seven primary assets, in theory, they have plenty of scope to grow their earnings versus an already massive juggernaut like Energy Transfer, but similar to many instances in life, there are other considerations in this situation.

The most important consideration being that they ultimately serve the British oil and gas supermajor BP (BP), and thus, their strategy and objectives will likely have a significant role in determining the future of their midstream subsidiary. Their seven primary assets are quite concentrated and relate to either the Whiting Refinery or offshore Gulf of Mexico oil and gas production, as the graph included below displays. 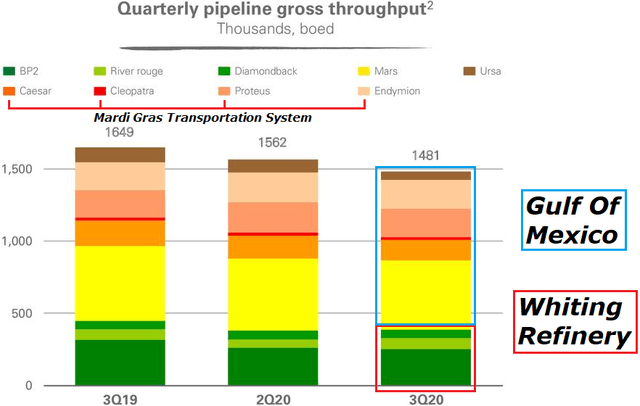 Whilst this thankfully makes their situation easier to analyze, on the other hand, it also means that the stakes are higher since they lack the massive geographical diversity of their larger midstream peers. Recently, BP unveiled their new eco-friendly strategy that aims to transition them from being a supermajor oil and gas company to an integrated energy company. This will see them making many changes, but the most relevant in this context is the majority of their total hydrocarbon-based capital expenditure during 2021-2025 being focused on projects with short-term payback periods, as the graph included below displays. 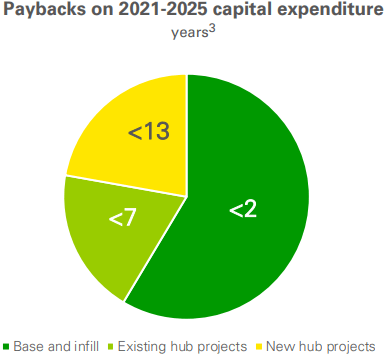 They seem hesitant to pursue too many risky new frontier projects since they are remaining cautious regarding the future demand for oil and gas, which in turn leads them to focus on a combination of base and infill as well as existing hub projects. This will naturally have a central role in determining the future for BP Midstream Partners, but generally speaking, this should prove supportive since they cannot simply uproot their pipelines and move them to another country so a continued focus on their current areas of operation is favorable. When discussing this during their third quarter of 2020 results conference call, management provided the following commentary confirming that they sit in a favorable position entering this new era for their parent.

“First, Whiting is considered an advantage refinery. It has access to and the capability to process an advantage feedstock namely Canadian heavy crude oil as well as a local advantage to Midwest demand centers. In addition, reliability at Whiting Refinery is measured by solemn unavailability has improved from 94% in 2014 to more than 96% for three consecutive years since 2017. This combination of feedstock advantage, location advantage and track record of high reliability as shown on the left side of this slide makes Whiting Refinery a good fit with BP strategy of having an advantaged refining portfolio.”

“Second, Gulf of Mexico production is a high margin region for BP. A region BP highlight as having absolute liquids volume growth in its portfolio over the period to 2025. It’s a region with significant opportunities for infrastructure led growth with future tie back and infill drilling opportunities having a sort of fast payback, high return project economics that BP is prioritizing in its capital allocation.” – BP Midstream Partners Q3 2020 Conference Call.

Thankfully, they appear to have dodged a proverbial bullet since their two main areas of focus both still play an important role going forwards for BP and, in the case of the Gulf of Mexico, even provide scope for significant growth. At the moment, they have released many visually inspiring presentation slides regarding their new eco-friendly strategy, but naturally, only time will tell exactly how this will all come to fruition and, thus, the magnitude of opportunities it will provide BP Midstream Partners. This means that unitholders will have to sit tight and wait to see what eventuates, but if nothing else, at least, this new strategy does not appear to threaten their current status quo. Since their overall financial position plays a central role supporting both their current distributions and any potential future growth options, a reanalysis has been provided. 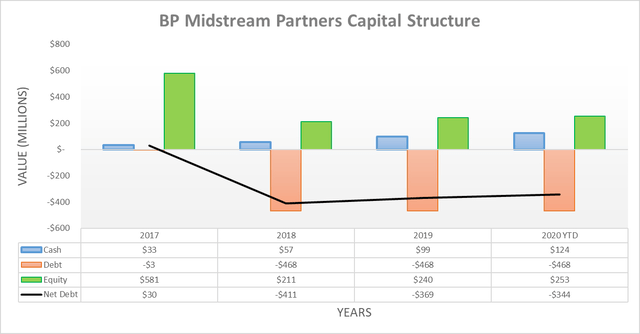 Following their continued resilient cash flow performance, it stands to reason that their capital structure would see no material changes during the third quarter of 2020, which sets a positive precedence for their leverage and liquidity. The massive change from the results from the end of 2017 should be ignored, as these were skewed due to the early stages of their partnership being formed. 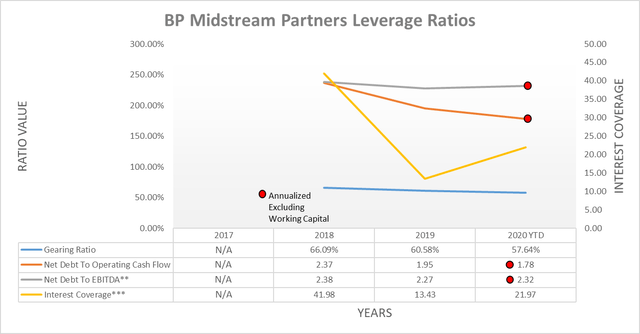 When conducting the original analysis, it was found that their financial metrics told quite a mixed story regarding their leverage, and naturally, this has not changed materially during the third quarter of 2020. Their gearing of above 50% sits well into the very high territory. However, this was ultimately disregarded since leverage relative to their earnings is more important than relative to the accounting value of the equity on their balance sheet. Since their net debt-to-EBITDA is above 2.00, it would normally indicate moderate leverage, but as their net debt-to-operating cash flow is only 1.78 and their interest coverage is a very strong 21.97, it was more appropriate to judge on the low side. Since they operate in a capital-intensive industry, their low leverage is desirable since they have ample capacity to borrow as necessary without risking the sustainability of their distributions. 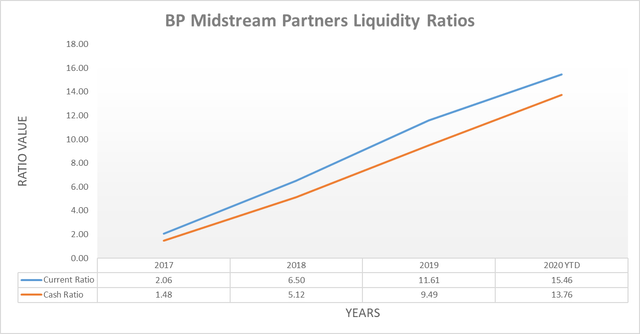 Similar to the original analysis once again, their current and cash ratios are still extremely high and even slightly increased during the third quarter of 2020 to seldom seen levels of 15.46 and 13.76, respectively. This very strong liquidity provides the final backstop that will support not only their current distributions but also reaffirms their base for potential growth in the future if the opportunities were to arise. Since they have an extremely close relationship with BP, there are no reasons to be concerned that they cannot continue finding support in the debt markets to provide liquidity and refinance any upcoming debt maturities.

Whether the new eco-friendly strategy by BP will provide opportunities for growth at BP Midstream Partners remains largely unknown at the moment, but thankfully, they have a solid base. Even if their earnings and, thus, distributions were to remain unchanged well into the future, they still offer a very high distribution yield of 12%, and thus, I believe that maintaining my bullish rating is appropriate.

Notes: Unless specified otherwise, all figures in this article were taken from BP Midstream Partners’ Q3 2020 10-Q, 2019 10-K and 2017 10-K SEC Filings, all calculated figures were performed by the author.