BP is facing an uphill battle to calm investor jitters after its stock fell to a 25-year low only days after it staked its future on a grand plan for the energy transition.

Chief executive Bernard Looney and top managers made a series of presentations to shareholders last week to convince them the UK oil and gas major’s pivot — part of a broader goal to be a net zero emissions company — would pay off.

But since then the company’s share price has steadily declined, closing at 232.4p on Thursday, the lowest level since October 1995, as concerns about a fresh wave of coronavirus infections outweighed any optimism among shareholders over the company’s new strategy.

While the shares ticked higher to 234.30p on Friday, they are still down 53 per cent this year.

BP announced in August it planned to cut oil and gas production by 40 per cent and increase low-carbon investment 10-fold by 2030. It also promised to generate returns of 8 per cent to 10 per cent, less than traditional hydrocarbon investments but substantial compared with other clean-energy projects.

The plan to “reinvent” the company was hailed as one of the sector’s most ambitious overhauls, even receiving praise from the likes of environmental group Greenpeace. Some ethical investors said it had set a template for others. 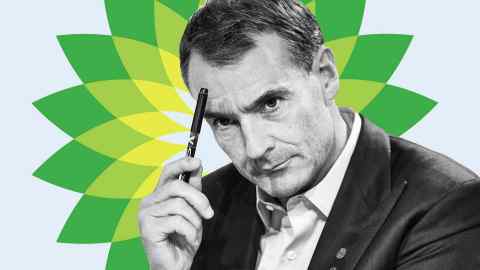 Others, however, are not so sure. Three investors, speaking on condition of anonymity, said that while BP had spelt out sufficiently what it intended to do, it had not adequately explained how it planned to achieve its goals and what set it apart from rivals.

“They didn’t detail how they planned on meeting their targets. There were just a lot of McKinsey slides,” said one large investor.

Biraj Borkhataria, analyst at RBC Capital Markets, said BP needed to show investors it can deliver on its pledges. “In this sector, intentions mean very little because companies have a poor track record of capital allocation,” he said.

In an interview with the Financial Times this month, Mr Looney acknowledged the onus was on BP to “execute” its strategy. But he also said investors who wanted BP to take action on climate change needed to back the company with their cash.

Mr Looney said investors now faced a choice between those companies such as ExxonMobil and Chevron of the US that were doubling down on hydrocarbons and those in Europe that were trying to diversify. Investors, he said, needed to “decide what they want”.

The company is pushing ahead with its strategy for the energy transition despite a dramatic fall in earnings because of the pandemic. BP has halved its dividend to shareholders, pledged to reduce capital spending by $3bn, issued new debt and announced 10,000 job cuts.

Some observers said longer time was needed to fully gauge investor sentiment. Oswald Clint at Bernstein Research said: “Investors need to digest the numbers, assess BP’s assumptions and come up with a reasonable view on the feasibility of achieving some of the targets. They need more time.”

This week’s share price drop came as Brent crude has come under renewed pressure as governments enacted new measures to curb fresh outbreaks of the coronavirus, which are expected to hit oil demand. After rising above $45 a barrel last month, the price is now about $42 a barrel.

BP’s rivals have also taken a hit to their share prices as they grapple with oil price turmoil and how to manage a shift towards lower-margin cleaner energy businesses while facing mounting financial pressure.

Royal Dutch Shell’s share price has dropped 58 per cent this year, France’s Total is down 45 per cent and ExxonMobil has fallen 52 per cent.