Boris Johnson will announce tougher Covid-19 restrictions in England in an admission that the government’s current approach is failing to stem an alarming second wave of the pandemic.

Mr Johnson decided to rip up his previous strategy after a new document published on Friday showed the number of coronavirus infections and hospital admissions had surpassed government scientific advisers’ worst-case scenario.

The prime minister is expected to announce on Saturday either a national lockdown in England or the addition of a tougher “tier 4” to the existing system of regional tiers.

Ministers are set to discuss the proposals at a Cabinet meeting scheduled for 1:30pm on Saturday with an announcement expected at 4pm.

Number 10 had discussed announcing the lockdown on Friday but decided to hold back for fear of causing alarm, according to government figures.

In a document dated October 14, a scientific advisory group to the government said the number of daily deaths from coronavirus was now in line with the “reasonable worst-case” scenario.

A senior government official confirmed on Friday that the current trajectory of the virus was exceeding scientific advisers’ bleakest projections, and that any circuit-breaker lockdown would have to last longer than two weeks to have a “reasonable effect”.

The prime minister is now expected to announce new measures which could amount to a national shutdown, according to briefings to The Times and the Daily Mail newspapers. Under one scenario that could mean all but essential shops, schools, universities and factories closing.

Although one Whitehall figure told the Financial Times that no final decision had yet been made, the discussions about an all-England lockdown constitute a remarkable U-turn for the government.

When Keir Starmer, the Labour leader, called for a “circuit breaker” lockdown two weeks ago the idea was roundly rejected by Mr Johnson. He has instead sought to avoid what he calls the “misery” of nationwide restrictions.

But lockdowns imposed in France and Germany this week have added to the pressure on Number 10 to take more urgent action.

Early on Friday Dominic Raab, the foreign secretary, insisted that the government was committed to its current system of localised restrictions — even though he conceded the government could not rule out tougher measures.

One option on the table is to introduce a new, tougher “tier 4” which would still allow flexibility in different areas — unlike a total national lockdown.

The October 14 document by the government’s Scientific Pandemic Influenza Group on Modelling (Spi-M) said its work suggested between 43,000 and 74,000 new infections were occurring each day in England.

It added that “the number of infections and hospital admissions are breaching those in the reasonable worst-case planning scenario”.

A separate document agreed by the government’s Scientific Advisory Group for Emergencies (Sage) dated July 30 — and obtained by the Spectator magazine — modelled a worst-case scenario for deaths in the UK of less than 100 a day throughout October.

But the document said this scenario could involve 85,000 deaths between July and the spring of next year, with a peak of 800 a day in March.

The UK on Friday reported 274 deaths from Covid-19 in the latest 24-hour period and 24,405 people testing positive.

The senior government official said that, with cases as high as they were currently, test and trace systems would not be enough to reduce the rate of viral transmission.

He added it was clear that the toughest restrictions in England known as tier 3 measures were not going far enough to keep the R number — the average number of people each infected individual passes the virus on to — below 1. 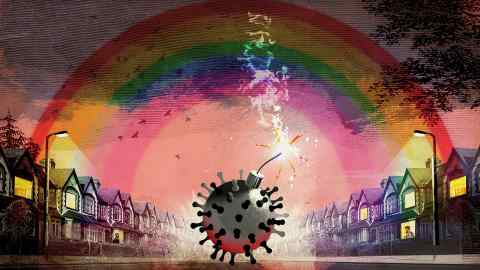 Minutes of an October 8 meeting of Sage and released on Friday said: “If there are no decisive interventions, continued growth [in hospital admissions] would have the potential to overwhelm the NHS, including the continued delivery of non-Covid treatments.”

According to data from the Office for National Statistics published on Friday, 568,100 people in England had coronavirus in the week to October 23, equating to 1 in 100. This was up from 1 in 130 in the previous week.

The government office for science estimated the R number in the UK was between 1.1 and 1.3, compared to 1.2 and 1.4 last week.

Jonathan Ashworth, Labour’s health spokesman, said: “It’s urgent Boris Johnson outlines the action he will now take to bring the virus under control and deliver on his promise to get the R below 1 quickly.”

According to government and London city hall figures, the capital was already on track to move into tier 3 restrictions within a fortnight — with the likely closure of pubs and bars — unless a rise in infections slows.