In business, the 80/20 rule states that 80% of your business will come from 20% of your customers. In an economy where roughly 2/3rds of the growth is driven by consumption, a growing “wealth gap” presents a major headwind.

As shown in the chart below, while asset prices were inflated by continued interventions of monetary policy, it only benefited the small portion of the population with assets invested in the market. Cheap debt, excess liquidity, and a buyback spree led to soaring Wall Street and corporate profits, surging executive compensation, and rising incomes for those in the top 1%. Unfortunately, the other 99%, known as “Main Street,” did not receive many benefits. 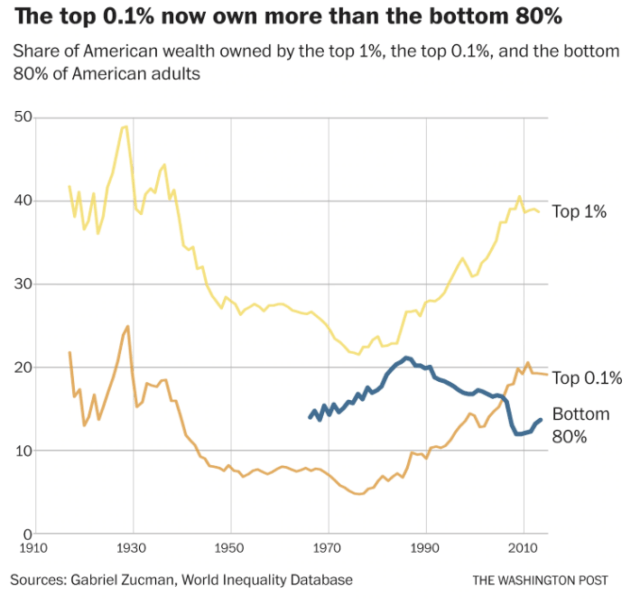 This divide is seen in various data, and survey statistics, such as the recent survey from the National Institute On Retirement Security which showed the distribution of assets by household where the top 25% of baby boomers owned 91% of the total.

These statistics show the warning we gave previously has now come to fruition:

“While the mainstream financial press continues to extol the virtues of investing in the financial markets for the ‘long-term’, the assumptions are based on historical data that is not likely to repeat itself in the future.

While we can argue about market returns, compounding rates, etc., for any of that to matter, we must assume Americans have money, or savings, to invest.

As part of its 2019 Savings Survey, First National Bank of Omaha examined Americans’ habits, behaviors, and priorities when it comes to saving, monthly spending, and retirement planning. The findings showed that nearly 80% of Americans live paycheck to paycheck.

The Planning & Progress Study gathered data in an online survey from over 2000 Americans over the age of 18. In that survey, they found:

Also, as Mish Shedlock noted, the “Retirement Math” is no longer favorable. To wit:

“A growing number of older Americans are carrying mortgage debt, and it will likely become more burdensome as the coronavirus crisis puts millions out of work and eats away at retirement accounts.

Many are still hurting from the financial crisis, which hit millennials when they were starting their careers and boomers during what were supposed to be their prime earning years.

In the U.S., some 9.18 million homeowners age 65 and over have mortgage debt, according to federal data analyzed by the Urban Institute. That’s up nearly 60% from 5.82 million a decade ago.” 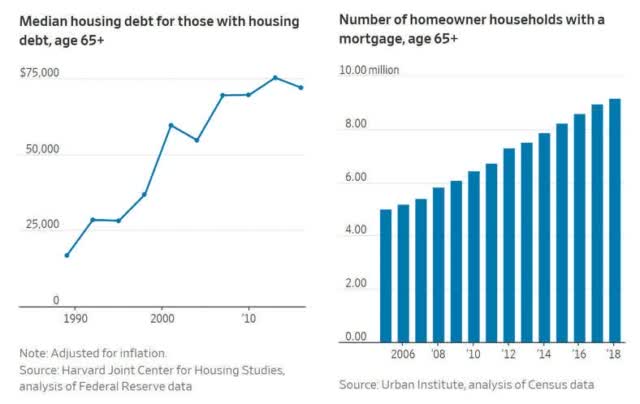 Meanwhile, demographics are blowing up the basic premise of how Social Security is funded. There were 2.8 workers for every Social Security recipient in 2017. That’s down from 3.3 in 2007, and that’s way down from the 5.1 workers per beneficiary that existed in 1960.

Furthermore, Social Security functions mostly as a giant conveyor belt to transfer wealth from the young and relatively poor to the old and relatively rich, allowing the average person (who now lives to be 78) more than a decade of taxpayer-funded retirement. As I have shown previously, welfare now makes up the highest percentage of disposable personal incomes in history despite record low unemployment, rising wage growth, and the longest economic expansion in the U.S. history.

Those entitlement programs are also the primary drivers of our national debt, which just hit $24.2 trillion with a $1.92 trillion deficit.

(These numbers will only worsen over the next few years as the Government’s “drunken spending binge” is accelerated by weak economic growth.)

“Things that would have been easily fixed a decade ago, or even five years ago, will soon be unsolvable by conventional means. Yes, we did indeed need the Federal Reserve to provide liquidity during the initial crisis. But after that, the Fed kept rates too low for too long, reinforcing the wealth and income disparities and creating new bubbles we will have to deal with in the not-too-distant future.”

The problem with low interest rates for so long is they have encouraged the misallocation of capital. We see it everywhere throughout the entirety of the financial system from consumer debt to subprime auto-loans, to corporate leverage, and speculative greed.

Debt, if used for productive purposes, can be beneficial. However, as discussed in The Economy Should Grow Faster Than Debt:

“Since the bulk of the debt issued by the U.S. has been squandered on increases in social welfare programs and debt service, there is a negative return on investment. Therefore, the larger the balance of debt becomes, the more economically destructive it is by diverting an ever-growing amount of dollars away from productive investments to service payments.” 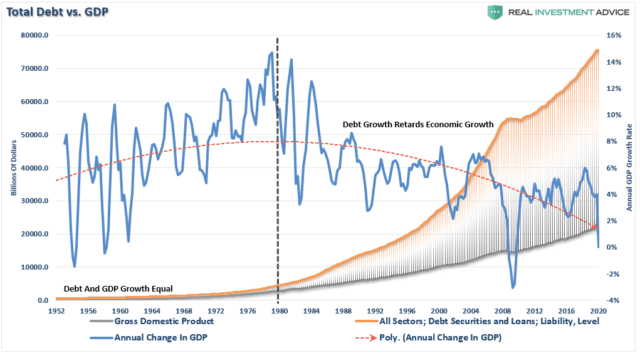 Currently, throughout the entire monetary ecosystem, there is a rising consensus that “debt doesn’t matter” as long as interest rates and inflation remain low. Of course, the ultra-low interest rate policy administered by the Federal Reserve is responsible for the “yield chase,” and the massive surge in debt since the “financial crisis.” 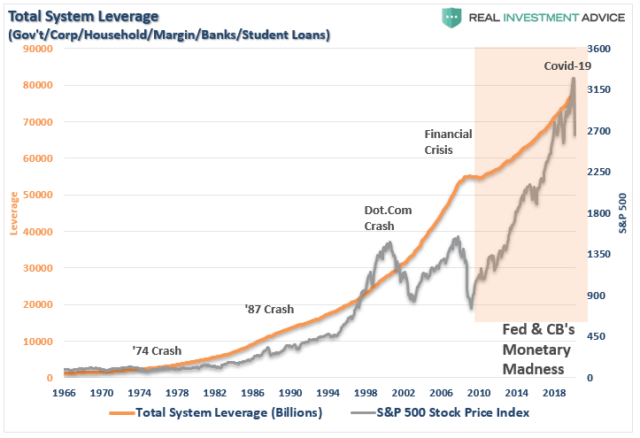 Despite surges in wealth, inflation and interest rates remained low, which created an “illusion” that debt-funded growth was working. However, the irony is that while it appeared the economy was growing, akin to the analogy of “boiling a frog,” we accepted 2% economic growth as “strong,” whereas such growth rates were previously considered near recessionary.

The Fed’s actions only “ignored the problems.” As noted last week, the Fed is trying to inflate a “4th Bubble” to keep a “Depression” from setting into the economy. To wit:

“The Fed’s problem is not only are they caught in an ‘economic liquidity trap,’ where monetary policy has become ineffective in stimulating economic growth, but are also captive to a ‘market liquidity trap.’

Whenever the Fed, or other Global Central Banks, have engaged in ‘accommodative monetary policy,’ such as QE and rate cuts, asset prices have risen. However, general economic activity has not, which has led to a widening of the ‘wealth gap’ between the top 10% and the bottom 90%. At the same time, corporations levered up their balance sheets and used cheap debt to aggressively buy back shares providing the illusion of increased profitability while revenue growth remained weak.

Now, the Fed is engaged in the fight of its life trying to counteract a ‘credit-event’ which is larger, and more insidious, than what was seen during the 2008 ‘financial crisis.'”

“The Fed is being hailed as the ‘fireman,’ when in fact they are the ‘arsonist.'”

Boomers Are Out Of Time

With the vast amount of individuals already vastly under-saved, the current “bear market” cycle will reveal the full extent of the “retirement crisis” silently lurking in the shadows. The Fed, Government bailouts, and low-interest rates can’t fix this problem.

This isn’t just about the “baby boomers,” either. Millennials are haunted by the same problems, as their prospects of “economic prosperity” have been set back years.

But here is the real problem for “baby boomers.”

Remember that “buy and hold” investment strategy touted by the mainstream media, which says to assume a return of 6% annually? The chart below shows $100,000 invested at 6% annually from 2000 or 2007. 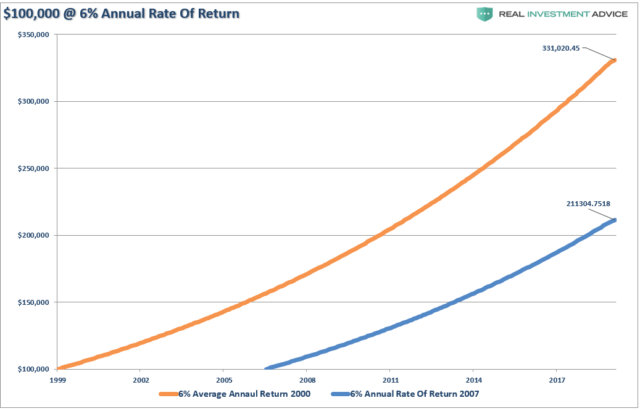 So, what’s wrong with that?

An investor tripled their money from 2000 and doubled it from 2007.

Unfortunately, it didn’t work out that way.

During the past 20 years, the annual return for stocks has been just 2.5% annualized, as would be expected from high levels of starting valuations. Since the peak of 2007, returns have annualized roughly 4.3%. Over the next decade, given current valuations, which are still elevated, suggests average returns will continue to remain near 2%, which will be consistent with expected rates of economic growth. 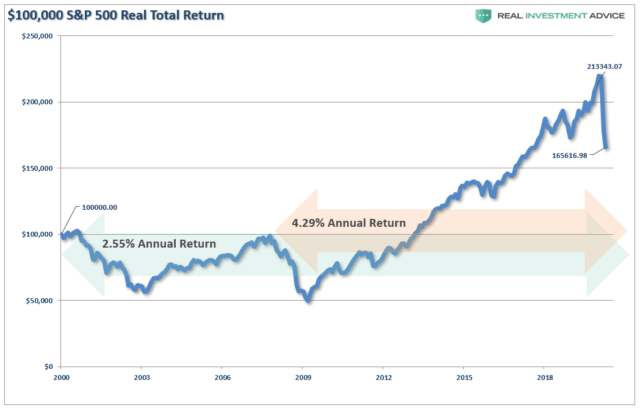 For boomers, whose financial plans were based on reduced saving rates, and higher rates of return, they are now well short of their retirement goals if they started in 2000. For those who started in 2007, they had just gotten back to their 6% return rate in February 2020. They are now once again behind their goals, and retirement will have to wait. 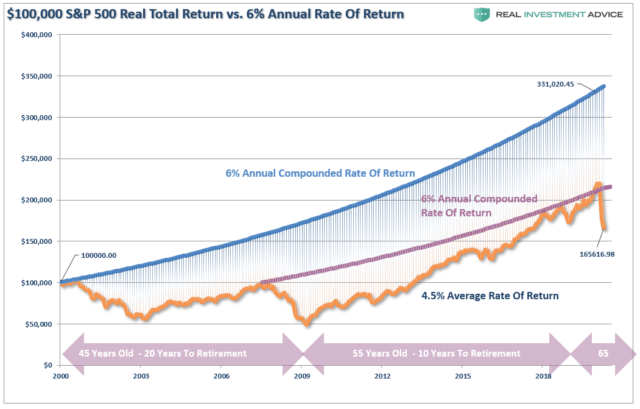 Unfortunately, the investment returns are actually far worse, as a vast majority of individuals who were fully invested into the market in 2007 were out of the market by the end of 2008. After such a brutal beating, it took years before they returned to the markets. As such. their returns are vastly different than what indexes suggest.

Here is the sequence of events.

For the majority of individuals today facing, or in, retirement the two previous bear markets had already left many further away from retirement than they ever imagined.

Now, the third bear market this century has likely crushed any ability to achieve that goal.

By the time the current recession and bear market are over, it will take much longer than anticipated for the economy and markets to bounce back. Each recovery has already been slower and weaker than the last, and the next recovery will be no different.

With growth rates below two-percent on average, wage growth suppressed, and a large contingent of boomers withdrawing assets to sustain their living requirements, the ability to generate higher levels of economic growth will be limited.

This will especially be the case as exceedingly large debt levels, and deficits, which were used for non-productive purposes, further inhibits economic prosperity.

For those hoping for another bull market to “bail them out,” the outlook isn’t great.