Bolivia’s interim president has pulled out of the campaign for next month’s election to avoid splitting the vote and thereby allowing supporters of former leader Evo Morales back into power.

“I’m doing it because of the risk that we divide the democratic vote between various candidates and as a consequence of that division the MAS [Mr Morales’ Movement Towards Socialism] ends up winning the election,” Jeanine Áñez said in a video posted on her Twitter feed on Thursday.

She did not say who she would back in the vote but her withdrawal will probably boost Carlos Mesa, the centrist candidate. Opinion polls suggest Mr Mesa trails Luis Arce, the MAS candidate who served as Mr Morales’ economy minister for many years.

Ms Áñez has been in office since late last year when Mr Morales quit in the wake of October’s election and fled the country under pressure from the military.

Initially it seemed that the conservative former senator would be in the job for a matter of weeks — just long enough to organise new elections and oversee a transition. But after repeatedly saying she had no intention of running for the presidency, she threw her hat into the ring in January. 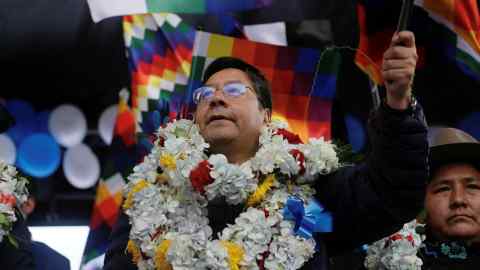 The election was first scheduled for May but has since been postponed twice owing to the coronavirus pandemic. The first round is now scheduled for October 18 with a second round, if required, on November 29.

Ms Áñez’s popularity has sagged in recent months as the country grapples with the pandemic and her health minister was arrested after allegations of corruption linked to the purchase of ventilators. Uncollected bodies piled up in the streets as morgues were overwhelmed.

Her unelected government has also been criticised internationally. Last week, US-based Human Rights Watch said the government had waged a campaign of political persecution against Mr Morales and his associates while turning a blind eye to killings.

A poll published this week showed Mr Arce clearly in the lead in the race for the presidency with 29 per cent of voter intentions, followed by Mr Mesa on 19 per cent. Ms Áñez was a distant fourth on 7.7 per cent behind another rightwing candidate, Luis Fernando Camacho. More than a quarter of voters were undecided.

Under Bolivia’s electoral system, to win in the first round a candidate needs 40 per cent of the vote and a lead of 10 percentage points over their nearest rival. If no one reaches that threshold the election goes to a run-off between the two leading candidates.