In many of my recent reports on Boeing (BA), I have been focusing on the Commercial Airplanes business. Some readers have concluded from that I do not value Boeing’s Defense business, which has booked some big contracts lately. I don’t fully agree with that since Boeing’s Defense business has been considered in our cash projections as well as our earnings reviews. It is indeed true that we don’t focus on Defense as much. The reason is that regardless of the recent Defense contracts, the bigger changes are happening at Boeing Commercial Airplanes [BCA]. 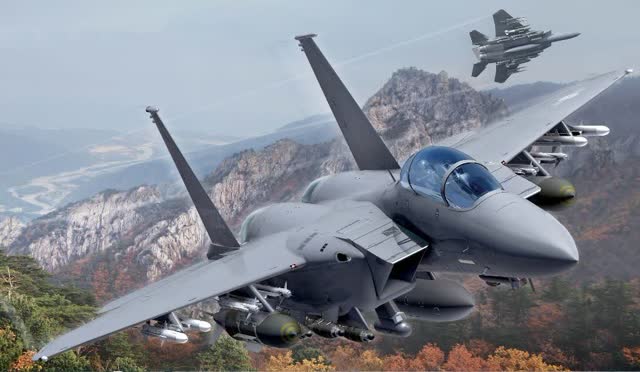 Another reason is that I launched a monthly series on Defense contracts and the values of those contracts a couple of years ago but was forced to discontinue this because it took several hours to process all data and write the report and readership was lacking. The current feedback on lack of Defense coverage drove my decision to relaunch a monthly Defense overview for Boeing and expand it to other Defense contractors along the way, if successful. After all, the goal is to efficiently provide a thorough coverage of the entire company and industry. As we relaunch the monthly overview, the series is now based on a Defense contracts monitor that we have developed and made available to subscribers to The Aerospace Forum allowing the user to interactively slice the data. In this analysis, I want to use the monitor to have a look at how Boeing Defense, Space & Security performed in terms of orders since commercial aircraft demand collapsed. 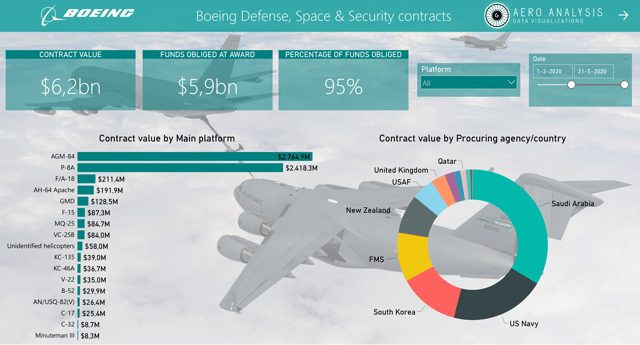 From the first of March until the 23rd of May, so roughly 3 months, Boeing booked $6.2B in Defense sales of which 95% or $5.9B was obliged at the time of award. So, what we do know is that a significant cash inflow comes from Boeing’s Defense. What we do not know is how much of that cash Boeing spends almost immediately on reward. Overall, Boeing Defense, Space & Security [BDS] books around $7B in revenues per quarter. So, $6.2B in contracts rewards would point at a relatively stable order book.

READ ALSO  Will Things Ever Go Back To Normal?

We are not seeing a huge outperformance of BDS. However, we are seeing that 95% of the funds is being handed over to Boeing at the time of contract award and that is a significant change compared to years ago when I did cover monthly Defense contract announcements and the funds obliged at time of award were barely over 15% and 30% in previous years.

Combined, the anti-ship and land- and sea-target variants of the Harpoon missiles provided $2.8B in contracts from March up until roughly the end of May making it the biggest franchise. The other big contract driver is the Boeing P-8, a multi-mission maritime patrol aircraft, for anti-submarine warfare, anti-surface warfare, intelligence, surveillance and reconnaissance and search and rescue missions. $2.3B out of the $2.4B awarded was for the procurement of long-lead parts, production and delivery of 22 P-8 Poseidons for the US Navy, New Zealand and South Korea. Other platform contracts were for logistics support and non-recurring engineering for the design, fabrication and correction of deficiencies required for the delivery and installation of retrofit kits for Navy P-8A aircraft with Increment 3 Engineering Change Proposal 6 capabilities.

Another notable contract was for the procurement of three MQ-25 aerial refueling drone’s System Demonstration Test Articles. The $84 million contract is not huge, but the MQ-25 is piece in Boeing’s refueling line up with a multi-billion sales potential.

Looking at the procuring countries and agencies, noteworthy is that Saudi Arabia accounts for a third of the sales followed by the US Navy (20%) and South Korea (13%). Is it surprising? No, not really. South Korea and Saudi Arabia are important partners of the US in Asia and the Middle East.

From March until (almost) the end of May, Boeing was awarded contracts valued $6.2B primarily driven by sales to Saudi Arabia and Harpoon missiles as well as P-8 Poseidon aircraft. Since COVID-19 hampered Boeing Commercial Airplanes and the travel industry, Boeing has increasingly started to rely on funds obliged at contract awards. However, we are seeing $2.6B in funds added from March through April while BCA lost $8.6B in contract value in those months (May data is not available yet). If these aircraft were already 40% paid for (which is the worst case), then we have $2.6B in contract awards and $3.4B in pre-payments to be returned. Given that Defense needs to sustain itself, we can’t say that BDS really is carrying BCA at the moment. The reduction in advance payments, deliveries and increase in cancellations is simply too big for that.

We are not seeing a huge uptick in order activity but are seeing that almost the entire contract value is obliged and the time of award which is a big difference compared to years ago when I tracked defense contracts daily. That seems to suggest that payments to Defense contractors has accelerated. We should, however, point out that Boeing receiving the funds at award is not exceptional. Where Boeing is benefiting is that the company will see a hike in progress payments from 80% to 90%, in part to support smaller businesses in the Defense products supply chain. Additionally, to cope with the COVID-19 crisis, the company received $882 million in funds that were previously withheld over deficiencies on the KC-46A program.