BNP Paribas (OTCQX:BNPQF) reported 1Q20 net income of EUR1.28B which was higher than what the markets expected, but that was mainly due to EUR381M real estate gains. If we adjusted that out, net income would have been meaningful lower, mainly driven by a ~EUR500M loan loss related to COVID-19. On the bright side, 1Q20 revenue were slightly ahead of expectations, reaching EUR10.89B, and costs were better than anticipated.

Domestic markets which is part of the retail banking group were the bright spots due to strength across most of its sub-segments. French retail (~39% of retail banking PBT) had stronger fee performance (+3% yoy), lower costs (-1.6% yoy), and lower than expected impairment, partially offset by a 10% yoy decline in NII. Italy retail PBT beat was mostly driven by lower provisions but revenue and costs were in-line. Other domestic retail (~51% of retail banking PBT) contributed to a strong beat owing to robust revenue and better than expected provisions.

International financial services were generally very weak due to poor performance insurance and wealth and asset management. Insurance was hit by a EUR384M mark-to-market charges. Wealth and asset management was impacted by a significant decline in real estate services which was caused by lower activity due to suspension in construction works as a result of COVID-19. I believe these effects are only temporary and will likely recover in both cases.

CIB also performed poorly, incurring a PBT loss of EUR17M, primarily caused by weak equity S&T revenue (-EUR87M) and higher provision (EUR161M). This was offset by strong FICC income which grew 35% yoy. The reason for the subpar performance in equities was largely due to dislocation of hedges relating to suspension on 2019 dividends by European authorities. FICC was boosted by good growth in rates, FX, and emerging markets.

Security services brought in PBT of EUR95M which was fueled by +12% yoy growth in revenue and spectacular yoy growth of 37% in transaction volume. 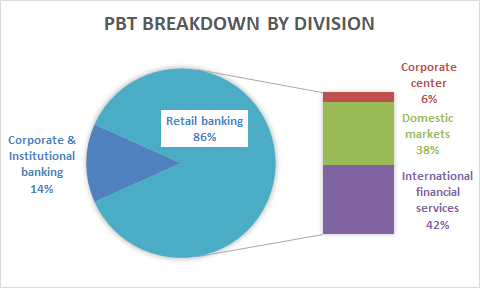 CET1 ratio dipped slightly in 1Q20 but well above requirement

The CET1 ratio fell to 12% from 12.1% in 4Q19 but the ratio has been on an uptrend for the past year or so. The decline in 1Q20 was mainly caused by the impact of COVID-19. I expect the CET1 ratio to remain pressured in the coming quarters due to the repercussions related to the pandemic. However, the bank is committed to accrue dividends at the standard 50% payout ratio. Actual payment of the dividends will be subject to regulatory approval though. 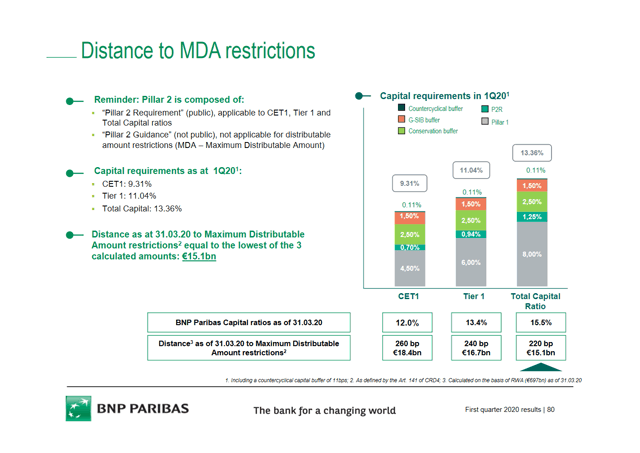 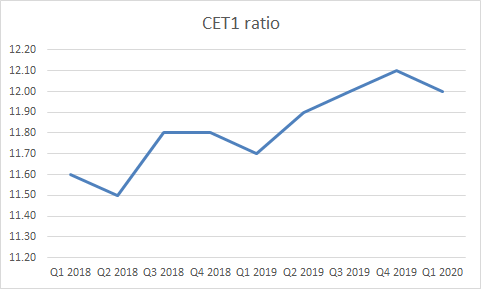 Valuation is attractive but no bank is immune to COVID-19

I believe that the stock is trading at a bargain of 0.5x book value given its RoTE of 8% in 1Q20 and 9.8% in 4Q19. The RoTE for the next twelve months would likely be lower at roughly 7-8%. Still, the stock would be still be attractive. Resumption of dividend is subject to regulatory approval despite the strong capital position of BNP Paribas. Other macroeconomic risks relating to the health crisis still persists, and while the bank being well capitalized among European peers, no bank is truly immune to the crisis.

Additional disclosure: Disclaimer: All research, figures, and interpretation are provided on a best effort basis only and may be subject to error. Any view, opinion, or analysis does not constitute as investment or trading advice, please do your own due diligence.