Blondie in rapture after selling song rights to Hipgnosis fund

Punk icon Debbie Harry has heeded the call of London’s most deal-hungry listed music fund, selling the Blondie catalogue of hits including “Dreaming” and “Atomic”.

The acquisition for an undisclosed amount is the third in a week by Merck Mercuriadis’s Hipgnosis Songs Fund, which also snapped up the work of four-time Grammy winner Rodney “Darkchild” Jerkins and five decades’ worth of Barry Manilow’s musical output.

With Blondie, Ms Harry and her longtime music partner Chris Stein emerged from the 1970s New York punk scene and caught the ear of mainstream America, blending musical genres to become one of the most recognisable acts of the era.

Under the deal, Hipgnosis will buy the rights to royalties from all 197 of their songs, including “Rip Her to Shreds”, the blockbuster hit “Call Me” and “Rapture”, the first US No1 single to feature rap vocals. The duo’s catalogue has several songs such as “Heart of Glass” that have been streamed more than 200m times each.

Mr Mercuriadis, the former manager of Guns N’ Roses, Iron Maiden and Beyoncé, has through Hipgnosis raised about £860m and built a portfolio of more than 50 artist catalogues.

Although it does not break down the details of individual deals with artists, Hipgnosis has reported spending £560m to buy 42 catalogues — totalling around 10,000 songs — in the year to March 2020.

Songs owned by the London-listed fund include Bon Jovi’s “Livin’ On A Prayer”, “Back to Black” by Amy Winehouse, and the Al Green classic “Let’s Stay Together”. 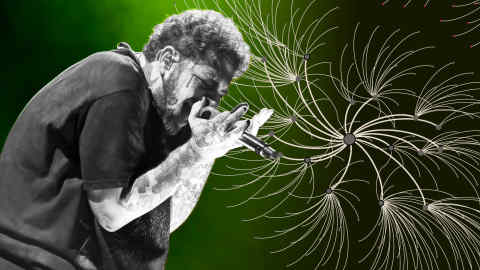 The Manilow portfolio includes albums that have notched up 85m sales worldwide and the 1975 hit “Mandy”, which has been played more than 65m times on Spotify.

Mr Mercuriadis said he had followed Blondie “since day one” and was delighted they were joining the “Hipgnosis family”.

“The singles have been not only massively successful but era and genre defining…No one should ever go anywhere without [albums] Blondie, Plastic Letters, Parallel Lines, my favourite Eat To The Beat or Autoamerican with them at all times.”

Ms Harry and Mr Stein said they were “so happy to be working with a progressive company”. After the Blondie deal was unveiled, shares in Hipgnosis fell 0.4 per cent to 118p.