Today, I took at look at one of my favorite financial stocks, BlackRock (BLK). Last weekend, I uploaded a video on BLK to my YouTube channel, to highlight the stock’s high quality, yet apparently overvaluation, as the stock hit new 52-week highs. BLK released its third-quarter earnings this morning and blew analyst expectations away. The company’s stock was up another 4% today, pushing those highs up towards the $650/share level. With this in mind, I wanted to take a look at the company’s fundamentals to see whether or not I will have to adjust my fair value price, factoring in the above average numbers and raised future estimates.

Not only did BlackRock hit new highs last week, but it also pushed past the $600/share mark. The combination of the highs and the round number threshold has caused BLK shares to catch investors’ attention. Yet, in this piece (and the attached video), I will discuss why, even though I think BLK is one of the highest quality dividend growth stocks in the entire market, I am not interested in chasing the stock here at the highs and joining the herd’s momentum.

BlackRock: One of My Favorite Financial DGI Stocks

But, before I discuss valuation, I do want to touch upon quality.

Frankly speaking, when analyzing any DGI stock, this is where I start. If a company is of low quality, then I don’t really care how cheap shares are. Buying low quality stocks when they’re cheap is essentially the definition of a value trap. Channeling my inner Warren Buffett, I’ll say, “It’s far better to buy a wonderful company at a fair price than a fair company at a wonderful price.”

So, with regard to quality, it doesn’t get much better than BLK. It’s an industry leader in the asset management space and continues to be aggressive and innovative.

The company’s technology services segment posted 17% y/y revenue growth in the second quarter and 8.8% growth in Q3. What’s more, news recently broke that BLK’s biggest rival, Vanguard, is restructuring its Asia strategy, potentially pulling out of the Chinese market. Investors expect BLK to fill the void that Vanguard is leaving behind, serving as another potential growth catalyst for the company.

During the second quarter, BLK’s net inflows were roughly $100b. And, although expense ratios on many ETFs and index funds continue to fall, BLK managed to generate $2.97b in base fees from its AUM.

During the third quarter, net inflows were even higher, coming in at $129b. The company noted that it saw net in flows across “all regions, investment styles, and product types.” BLK’s total base fees came in at $3.23b during Q3.

When boiling down BLK to its simplest form, it is essentially a company that makes money by generating fees on the massive account of capital that it has under management. The continued net inflows and rising AUM point towards more bottom-line growth.

BLK’s strong bottom-line growth over the years had allowed its management team to generously reward shareholders. BLK has an 11-year dividend growth streak. The company did freeze its dividend during the Great Recession, but unlike many of the banking stocks, it did not cut. And, what’s more, since FY2010 when the dividend began to rise again, we’ve seen tremendous dividend growth.

BLK’s dividend has increased from 4.00/share in FY2010 to its current forward dividend rate of $14.52 today. I’ll touch on this more in a moment, but I think it’s possible that BLK’s next dividend increase bumps the quarterly payment up to $4.00/share (it would be pretty amazing, from a dividend growth standpoint, to see a quadruple its dividend over an ~11-year period like this). BLK’s 10-year dividend growth rate is a very impressive 15.5%. Its 5-year DGR is 11.3%. And, its most recent dividend increase came in at 10% in January of 2020.

Being that BLK’s EPS is expected to rise in 2020 and again in 2021, I expect another strong dividend increase in January of 2021. I think that expectations of another low double-digit dividend growth are reasonable here.

Prior to the Q3 beat, the consensus analyst estimate for 2021 EPS was $33.43. Today, that estimate has already risen to nearly $35/share. At this point, I wouldn’t be surprised to see the consensus rise in the coming days/week as analysts bake the fabulous Q3 results into their models.

Assuming that the analyst consensus EPS estimate of ~$35/share for 2021 is correct, if the company were to raise its dividend by another 10%, to the $4.00/share mark on a quarterly basis, we’d be looking at a forward payout ratio of 45.7%. This is in line with the company’s long-term average in the mid-40% range.

And, while we’re on the subject of shareholder returns, it’s also worth mentioning that while BLK did not buy back shares during Q3, it did repurchase $1.1b of shares during the second quarter.

This was primarily due to PNC’s (NYSE:PNC) decision to divest its large BLK stake. The company bought its shares back from PNC at $415/share, which looks like a major bargain at this point in time.

Over the past 5 years, BLK management has reduced its outstanding share count by 6.25%. These retired shares help to bolster EPS and reduce the burden of the dividend on cash flows moving forward, which should make continued dividend growth more sustainable.

Moving forward, BLK management said that it would be opportunistic when thinking about buybacks, saying that it would take advantage of any “attractive relative valuation opportunities arise during the remainder of the year.”

This is a perfect segue into the second half of this article, which focuses on valuation.

Late last week when I posted the YouTube breakdown of BLK stock, I highlighted my opinion that while the company is a best-in-breed type stock and something that I plan to own for the long term as a dividend growth investor, I did not believe that the valuation offered much in the way of a margin of safety.

I said that I thought that investors with a long-term time horizon and who were willing to be patient would likely be satisfied with their long-term results buying BLK shares at the new highs in the $611 area, but as for me, I was looking for more weakness before adding to my personal position.

Mostly recently, I added to my BLK stake at $385.89 on March 12th. In the article that I wrote about that purchase at the time, here’s what I said:

“This a name I’ve owned for years. It continues to perform well as a dividend growth stock, recently raising its payments by nearly 10%. And, after falling from recent highs north of $576 all the way down to $385, I couldn’t resist the urge to add to my already full position. I went overweight BLK at $385.89. At that price point, shares traded for roughly 13.5x earnings, which is well below the ~15x level that shares had found support a during times of weakness dating back to 2013. The 13.5x level is roughly where shares bounced off of during their big sell-off in 2012, so I was happy to use that level to add. Furthermore, at $385, I was able to lock in a 3.76% yield. Due to lower interest rates, I expect BLK’s operational performance to slow down in 2020. With that in mind, I expect dividend growth to slow down as well. In short, I expect to see mid-single-digit dividend increases from BLK in the coming years. But, give me a 3.75% yield growing at 4-7% and I’ll always be a happy camper.”

I was pleased to find such a steep discount because while I really like BLK’s dividend growth prospects, I am always hesitant to add to financial stocks due to their economic and interest rate sensitivity. I never expected to see shares rebound so quickly, but I am obviously pleased to have purchased BLK during the March weakness. However, because of the volatility that this stock has shown in recent years, I am not looking to chase the stock here as it makes new highs.

As you can see on the F.A.S.T. Graph below, BLK shares have traded down below the 15x threshold a handful of times during the last 2 years. To me, this was the time to be buying BLK shares, not when they’re trading for 20.5x blended earnings. 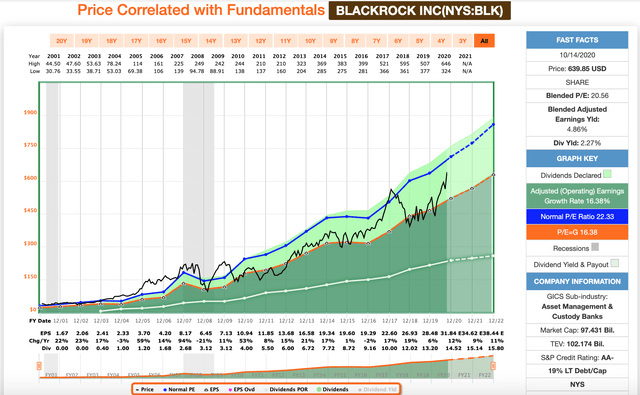 In the video I posted last week, I highlighted my fair value estimate in the $530-$550 range. This was based upon the forward looking P/E multiples that I found to be reasonable areas to accumulate shares while still providing an acceptable margin of safety. However, the company’s big Q3 beat has already caused its full year 2020 and 2021 EPS estimates to rise and I don’t expect this trend to stop any time soon.

I think that a ~16x forward multiple is a nice place to start thinking about accumulating BLK. At that level, investors obviously don’t have the same margin of safety that can be found in the sub-15x range, but if BLK continues to grow its top and bottom lines at a double-digit clip, it’s unlikely that we’ll see those types of prices again in the short term without a negative macro catalyst.

With that in mind, I think the $560 area (16 x $35 in 2021 EPS) is where I would consider adding shares again. This is 12.5% lower than where shares trade at today, but it bears noting that BLK shares traded for less than $560 just a couple of weeks ago, so it’s not as if this discount is unrealistic.

This article was previously published for members of The Dividend Kings.

Click here for a two-week free trial so we can help you achieve better long-term total returns and your financial dreams.

Disclosure: I am/we are long BLK. I wrote this article myself, and it expresses my own opinions. I am not receiving compensation for it (other than from Seeking Alpha). I have no business relationship with any company whose stock is mentioned in this article.