Biogen (BIIB) is a large-cap pharmaceutical company specializing in neurological disease therapies. Most of its current revenue is derived from therapies for multiple sclerosis and that is likely to continue for at least the near future. However, the big growth opportunities are in other neurological diseases, including Alzheimer’s. Biogen may be submitting a BLA (Biologic License Application) to the FDA in the second quarter of 2020. The submission of the BLA would, in itself, be a good sign for the stock price. Assuming the reader is familiar with Biogen’s current portfolio of therapies, this article will focus on the Alzheimer’s opportunity.

Aducanumab is a monoclonal antibody targeting the amyloid deposits found in Alzheimer’s patients. Despite the failure of earlier potential anti-amyloid therapies, it was tried because it was believed to be better tuned to the job, and the patients tested were at earlier stages of Alzheimer’s. It was seen more as a way to slow or stop the progression of Alzheimer’s, rather than as a potential cure for people who had moderate or severe disease.

Following some promising Phase 1 results, Biogen initiated two large Phase 3 studies in parallel, and meant to be identical, in 2016. In March 2019, Biogen announced the trials had been stopped [Biogen Discontinues Phase 3 aducanumab trials]. This was a result of a futility analysis, which suggested that the drug benefits would not reach statistical significance if the trials continued. But Biogen did continue to monitor the trial patients, and in just a few months, in October, saw statistically significant improvement, particularly in the EMERGE study [Biogen Plans Regulatory Filing for Aducanumab].

The EMERGE study met its primary endpoint. The ENGAGE study did not. Hence, technically aducanumab did not pass muster for FDA approval. However, in studying the difference between the two trials, Biogen concluded that the ENGAGE study failure was a result of some patients receiving less than the optimal amount of drug. The FDA indicated (to Biogen) that it was willing to consider these results for potential approval. Hence, doctors, scientists, and stock analysts have fallen into two camps: those who believe the trial failed and aducanumab should not be approved, and those who believe the results warrant approval based on the optimistic analysis.

If you are not already familiar with the trial results, the best summary I have seen was made on April 2, 2020, by Biogen. See Aducanumab Phase 3 Topline Results. I find the post hoc analysis by Biogen to be quite reasonable, but there is plenty of room for argument. That is why I believe the FDA decision will come down to what is essentially politics. 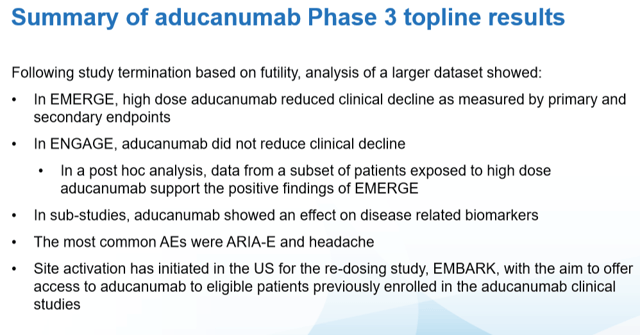 I have been around long enough to have invested in companies that had surprising Phase 3 trial failures, but with ambiguous results that led the companies to argue for FDA approvals. I remember when Dendreon had its Provenge metastatic prostate cancer therapy delayed for about 2 years in what some observers believed was a political decision by the FDA that favored competitors. I have held stock in several companies with good Phase 2 cancer therapy results that failed Phase 3 trials. In some cases, failures were ascribed to changes in protocol. Discussions with the FDA resulted in companies having to drop the trials or start new Phase 3 trials, for example with Celldex (CLDX), ImmunoGen (IMGN), and Celsion (CLSN). Then there are incomplete response letters from the FDA, which may result from overly optimistic submissions from companies.

I want to make clear to less experienced biotechnology investors that the default outcome for aducanumab, given the Phase 3 data, is rejection by the FDA. So why is Biogen still planning to make a submission for regulatory approval to the FDA, and likely before the end of June?

The argument is based on feedback from the FDA, though that is no guarantee of approval. It helps to keep in mind that not all drug approvals are alike. Safety and efficacy need to be proved in a trial, generally a double-blind, randomized Phase 3 trial, and preferably in two Phase 3 trials. But approvals are sometimes given based on Phase 2 results, and even for Phase 3 trials the sample size can differ by quite a large number of patients. Therapies for malignant cancers have lower bars than therapies for ordinary headaches, and that makes sense. In safety, we want any new headache therapy to be very safe, because we already have a lot of drugs available, and headaches are not life-threatening. In efficacy, any statistically significant improvement in a cancer therapy is a win for a patient who has no other options.

In Alzheimer’s, right now, there are no other options. There are drugs that help with some symptoms, but none stop or slow the progress of the underlying disease. Alzheimer’s leads to death, so I would argue it is like cancer. If a drug shows it can slow the progress of the disease, it should be available for patients. The politics hinges on the FDA interpretation of the word shows. Did the post hoc analysis of aducanumab show efficacy and safety? Should the FDA use the strictest criteria, even if that means millions of patients are doomed to see their disease progress? Or should the FDA bend a little, in this case, as it has bent a bit for the COVID-19 potential therapies?

Biogen is talking to the FDA, and the FDA has its people talking among themselves. Biogen is preparing a Biologic License Application. If feedback from the FDA is positive, Biogen will submit the BLA. Then the FDA will accept or refuse to file the BLA. Then there will probably be an Advisory Committee hearing, given the importance and complexity of the application. The FDA usually rules as the Committee advises, but there have been exceptions. To put this process in a political perspective, there will likely be both strict constructionists and liberal constructionists in the FDA decision-making apparatus.

If the FDA does grant commercial approval, it is highly likely to demand continued study of aducanumab as a condition. The value of aducanumab depends mainly on three variables: cost of production and sales, number of patients, and pricing. In response to analyst questions, Biogen has stated that it believes the cost of production will not be prohibitive, though SG&A guidance for 2020 is up in anticipation of the aducanumab launch.

The United States has about 5 million Alzheimer’s patients. This population is expected to increase as America ages. Most of the current 5 million patients are too advanced to be on the aducanumab label (if it gets one), but that may not prevent their loved ones demanding they be allowed to try it. The best fit for the label will be newly diagnosed patients in the early stage of the disease. About 500 thousand new cases are diagnosed each year, but many may be in more advanced stages of the disease. If there is an approved drug that helps, screening for the earliest stage of the disease might improve.

Michel Vounatsos, Biogen’s CEO, gave this observation on pricing: “In terms of price, it’s still early, even if we are making progress. We engage with stakeholders, because as you can imagine, there is almost no drug cost today. So we engage with patient associations, pharmacoeconomics, thought leaders and all the customers, mostly in the US and beyond the US. Beyond the price, it’s all about the access condition and the affordability. We know that the more we wait, the more transition – that people will transition to full-blown assistance and loss of dependence, which costs so much to the society.”

Pricing is hard to predict in advance, and companies that price too high initially may find that insurers are reluctant to pay, which greatly reduces the number of paying patients. Aducanumab could turn Alzheimer’s into a chronic disease, one with large numbers of patients, and someone has to pay the bill, mostly Medicare. So I will just guess $10,000 per year per patient, though that might seem unfairly low to Biogen.

So, wild ballpark guess, ramping to half of the 500,000 new cases per year, at $10,000 for the first year, multiplies out to $2.5 billion. If cohorts stay on the drug, in a few years we would be seeing over $10 billion a year. Which is a big hit to the healthcare system, and why I don’t see a significantly higher price. Compare that to Biogen’s 2019 total revenue of $14.4 billion, and you can see why an approval of aducanumab would have a large impact on Biogen’s stock price. Keep in mind that if approved in the U.S., it becomes more likely that Biogen will be able to get approval in the EU and rest of world, so the numbers get bigger even if the single-payer nations negotiate a lower price for the drug.

Biogen’s 2020 guidance does not include any revenue from aducanumab, though it does include some expenses for building a sales force. Guidance is for revenue to be down slightly to $14.0 to $14.3 billion, due mainly to declining sales of older drugs like Avonex. Expenses will be up slightly, leading to a decline in non-GAAP EPS to $31.50 to $33.50, from $33.57 in 2019. Of course, guidance may be conservative.

I believe that no aducanumab revenue is priced into the current stock valuation. That does not mean that the stock price cannot fall on negative events like Biogen announcing it will not submit a BLA, or the FDA rejecting the BLA, or requiring further clinical trials for approval. But it does mean it should go up substantially if it seems to be marching toward approval and commercialization.

I repeat my position that Biogen is currently undervalued, even if the FDA rejects aducanumab. See my prior article, Biogen Is A Buy Regardless of Aducanumab, from November 6, 2019 for my reasoning. So I see very little risk in buying Biogen at the current price, and a substantial future reward if the FDA approves aducanumab.

Disclosure: I am/we are long BIIB, CLDX, CLSN. I wrote this article myself, and it expresses my own opinions. I am not receiving compensation for it (other than from Seeking Alpha). I have no business relationship with any company whose stock is mentioned in this article.