That’s why, based on Biogen’s (NASDAQ: BIIB) announcement of likely approval of its new Alzheimer’s drug, the company’s share price increased by 44%, a $16 billion market capitalization increase. 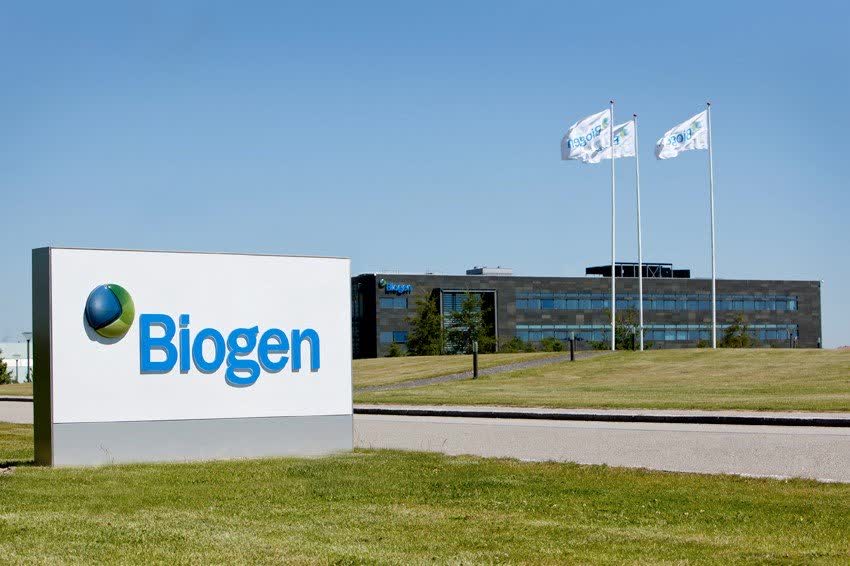 The FDA and Biogen have announced a number of recent updates on Aducanumab.

The company has had a volatile share price for several years on the back of volatile news on its Aducanumab drugs. This drug is focused on targeting a plaque that forms in the brain cells of Alzheimer’s patients, one of the first drugs to target it, and it has been in development for nearly a decade. Across this time it’s gone through numerous studies.

However, recent FDA and Biogen results indicate that re-examining the data could lead to drug approval.

Aducanumab targets the plaque that forms in brain cells of Alzheimer’s patients. After initially concluding that its drug had failed its Phase 3 trial, Biogen re-examined the data and found what it says is evidence that the treatment works.

In its briefing documents, the FDA staff agreed. It said the reanalyzed Phase 3 trial “provides primary evidence of effectiveness,” which is further supported by chemical changes detected in patients, as well as evidence from an earlier Phase 1 study.

In a note following Wednesday’s FDA filings, Wells Fargo Securities analyst Jim Birchenough said he expects Friday’s advisory committee to recommend approval. “While predicting any FDA panel outcome is difficult,” he wrote, “we believe that risk-reward is favorable and view positive recommendation as more likely than a negative vote.”

The initial indication is that the data wasn’t sufficient. However, Alzheimer’s patients don’t have much for them. This drug could be a blessing. Initial indications were just a 20% chance of approval, but the potential for $12 billion peak sales. Biogen is at a low double digit P/E ratio, and this drug could allow the company to double profit.

That’d be massive for the company and shareholder returns. At its current price, if the drug is approved, that’d make the company worth more than double its current value. This Friday, we’ll potentially hear about whether the drug will be approved. However, the market currently believes that approval is more likely than not.

Biogen has an impressive asset pipeline that it’s continuing to focus on developing.

Overall, Biogen is focused on expanding and improving its overall portfolio. The company’s new drug readouts should help to expand its portfolio despite concerns around the existing portfolio. Potentially combined with Aducanumab, along with the company’s major near-term data readouts, the company should be able to reward shareholders significantly.

Financially, the company has continued to perform incredibly well.

Some of Biogen’s core businesses have continued to struggle on the back of an incredibly difficult year. The company has seen revenue drop 6% YoY and Non-GAAP EPS dropping by 4% YoY. The company’s annualized EPS will come in at more than $35, meaning a P/E ratio of roughly 10, not counting Aducanumab, after today’s share price increase.

The company’s GAAP EPS took a one-time hit from unexpected R&D, but the company’s overall business has remained strong. 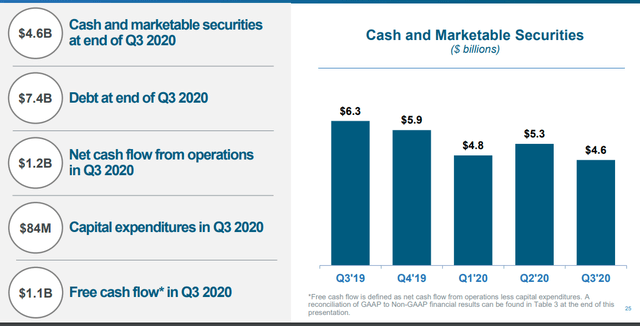 Biogen has $4.6 billion in cash and marketable securities and $7.4 billion in debt at the end of the quarter. That means the company has a very modest $2.8 billion net debt position. This means that the company is well positioned to make a significant acquisition or growth. Given recent consolidation in the sector, the company could be looking to do just that.

The company’s capital expenditures have been minimal, and the company’s FCF in 3Q 2020 was $1.1 billion. That’s annualized FCF of $4.4 billion, highlighting the company’s strength. The company has the potential to generate massive FCF on top of Aducanumab, on the back of its current asset base.

It’s worth taking a look that the company has changed its guidance on the basis of its strength. The company has reduced its revenue guidance by $800 million and its non-GAAP diluted EPS guidance by ~$2 / share at the midpoint. Those difficulties have come on the back of a difficult year for some of the company’s largest products, which have hurt its share price.

However, this doesn’t change the company’s value at the current time nor its ability to generate long-term shareholder returns.

Biogen’s risk is of course that the drug industry is one that requires massive R&D with no guarantee of its performance or success. The volatility that the company has faced in its portfolio with Aducanumab is no more an indication of the volatility that healthcare companies face than anything else. However, indications are that the company will continue to perform for the long run.

The Energy Forum can help you generate high-yield income from a portfolio of quality energy companies. Worldwide energy demand is growing and you can be a part of this exciting trend.

Click for a 2-week free trial, with an unconditional money back guarantee and 47% off of our popular annual plan! There’s nothing to lose and everything to gain!

Disclosure: I am/we are long BIIB. I wrote this article myself, and it expresses my own opinions. I am not receiving compensation for it (other than from Seeking Alpha). I have no business relationship with any company whose stock is mentioned in this article.