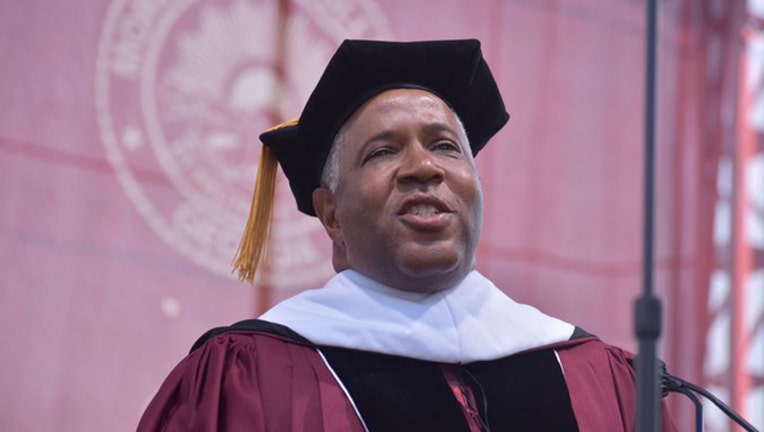 Smith, the founder and CEO of Vista Equity Partners and Morehouse’s commencement speaker on Sunday, announced that his family was setting up a grant to eliminate all student loans for the graduates.

“On behalf of the eight generations of my family that have been in this country, we’re gonna put a little fuel in your bus. This is my class, 2019. And my family is making a grant to eliminate their student loans,” Smith said to nearly 400 graduating students who cheered when they heard the news. “I know my class will make sure they pay this forward…and let’s make sure every class has the same opportunity going forward because we are enough to take care of our own community.”

Smith had already announced a $1.5 million gift to the school. The additional pledge to pay off the graduating class’ student loan debt is estimated to be $40 million, 11Alive reported.

The investor and philanthropist received an honorary doctorate from the college during the graduation ceremony. Morehouse College is an all-male historically black college located in Atlanta, Georgia.

Smith, who has an estimated net worth of $5 billion, founded Vista Equity Partners in 2000, a private equity firm that invests in software, data, and technology-driven companies. The 56-year-old billionaire is the first African American to sign the Giving Pledge, a campaign founded by Bill and Melinda Gates and Warren Buffett to encourage wealthy individuals to dedicate the majority of their wealth to philanthropy, Forbes reported.

“Every Morehouse Class of 2019 student is getting their student debt load paid off by their commencement speaker. This could be the start of what’s known in Econ as a ‘natural experiment.’ Follow these students & compare their life choices w their peers over the next 10-15 years,” Ocasio-Cortez tweeted Sunday.

She added in another tweet, “It’s important to note that people shouldn’t be in a situation where they depend on a stranger’s enormous act of charity for this kind of liberation to begin with (aka college should be affordable), but it is an incredible act of community investment in this system as it is.”

This isn’t the first time Smith made a generous donation to a school. In 2016, Smith pledged $50 million of his personal money and through a foundation to his alma mater, Cornell University.

He is also the president of the Fund II Foundation.