Bill Ackman’s London-listed investment vehicle will join the UK’s most high-profile stocks index after a year of strong returns fuelled by a well-timed bet that coronavirus would spark sweeping lockdowns and destabilise global markets.

Pershing Square Holdings will be added to the FTSE 100 after the close of trade on December 18, FTSE Russell, the index provider, said on Wednesday evening.

The closed-end Pershing Square fund listed in London in 2017 following a flotation in Amsterdam three years before and tracks the performance of Mr Ackman’s New York hedge fund. Mr Ackman, whose firm manages around $17bn in assets, is one of the hedge fund industry’s best-known figures.

After a 40 per cent gain in 2014, Mr Ackman suffered a run of bad bets, mostly notably on pharmaceutical firm Valeant and a bet against nutritional supplement seller Herbalife, which led to four consecutive years of losses.

However, his fortunes have dramatically reversed over the past two years, with a 58 per cent gain last year and a 62.8 per cent rise this year to the end of November.

That has made his $11bn Pershing Square Holdings one of the world’s top-performing hedge funds this year. The fund has been helped by a quick $2.6bn profit during the market turmoil this spring from bets that the cost to insure against defaults on US and European corporate bonds would jump as investors worried groups would struggle to pay their debts. 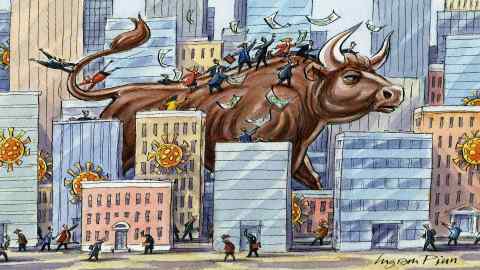 “Because we believed that the coronavirus could only be stopped in Europe and the US with an unprecedented economic shutdown, based on what we learned from China, we were confident that US and European credit spreads would likely widen substantially from their near all-time lows,” Mr Ackman said in a letter to investors in late March, referring to a sharp sell-off that took place in the corporate debt market at the height of the Covid crisis.

Mr Ackman ploughed the proceeds from the position against corporate debt into stocks, just as they were embarking on a sharp rebound. Last month he said he had put on another, similar bet.

Broker Hargreaves Lansdown said the inclusion of Pershing Square reflected its “star performance” during the pandemic.

“Shares in Pershing Square have leapt partly due to deft choreography by CEO Bill Ackman’s fund management team during the coronavirus crisis. Moves to hedge its equity portfolio just before the pandemic hit paid off when the market crashed in late March,” said Susannah Streeter, senior investment and markets analyst at Hargreaves Lansdown. The company had been “waiting in the wings” in the FTSE 250 for some time, she added.

Companies drop in and out of the benchmark UK index every quarter in an effort to ensure indices are representative. While Pershing Square ascends to the FTSE 100, home repairs group Homeserve is one of those to drop out into the FTSE 250.

Previous PostSnowflake (SNOW) earnings Q3 2021Next PostCreator Of The Bond VIX: It All Comes Crashing Down After 2025