The start of the month brings news of distribution announcements. There were around 40 cutters announced so far, and only one of them, Macquarie Global Infrastructure Total Return Fund (MGU), was a portfolio holding. In this short note to our members, we would like to discuss this cut as well as another big distribution cut to Guggenheim Enhanced Equity Income Fund (GPM), a fund that is not a portfolio holding but has been discussed by our community several times in the past.

I was very surprised at the magnitude of the cut (-46%), which was accompanied by a change from quarterly (old rate of $0.42/quarter) to monthly distribution schedule (new rate of $0.075/month), given that MGU’s NAV hasn’t been faring too poorly compared to other global infrastructures funds such as the Cohen & Steers Infrastructure Fund (UTF) and the Duff & Phelps Utility & Infrastructure Fund (DPG). 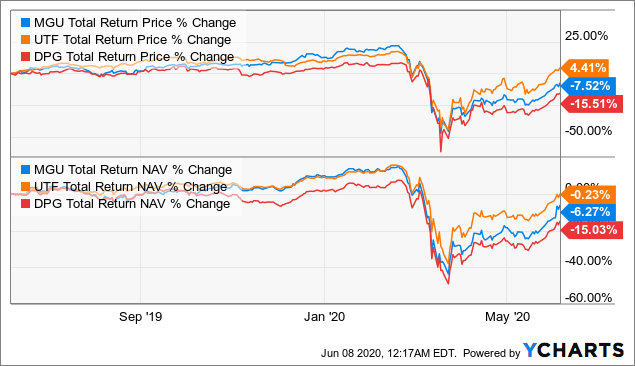 The reason that such a deep cut was surprising was that the fund had been covering a large portion of its distribution from net investment income (“NII”). As Nick wrote in his latest update on MGU (MGU: Global Infrastructure Fund That Has Appeal).

“The one thing I really like about MGU is the fact that a large portion of this equity fund’s distribution is covered through NII. In the last Semi-Annual Report, they actually had NII coverage of over 100%. Which is almost unheard of for an equity fund. This has dropped since releasing their full 2019 Annual Report but isn’t cause for concern.”

The numbers above show that the fund covered 77% of 2019’s distribution from NII. However, the latest coronavirus-induced crash which brought down the prices of listed infrastructure stocks around the world would have made the distribution of any ROC/capital gains much less palatable. 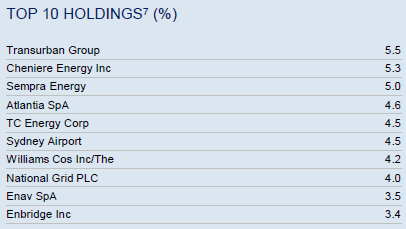 The lowered distribution rate should provide much stronger NAV growth going forward, and at a -16.42% discount, there’s no reason to be selling. We still rate MGU as a buy due to its attractive valuation and strong historical performance vs. peers. 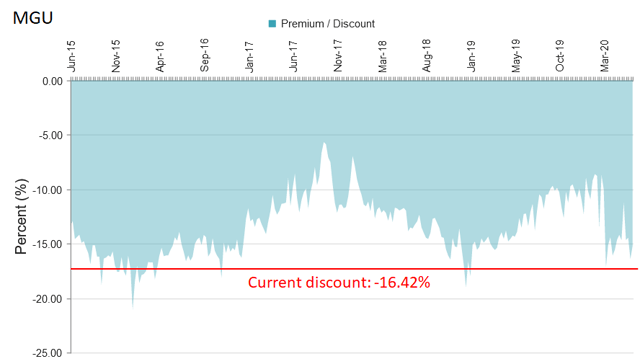 The second cutter, Guggenheim Enhanced Equity Income Fund, is one that I’m less positive on despite its -12.65% discount being much wider than average. GPM cut by -50% from $0.24 to $0.12 quarterly. This is a domestic covered call equity fund and is distinguished from most other option income CEFs by its use of leverage. However, the fund’s use of leverage has not really boosted its returns significantly despite the decade-long bull run, and when the COVID-19 induced crash is included, GPM comes out last compared to other option income funds such as Nuveen, Eaton Vance or BlackRock. 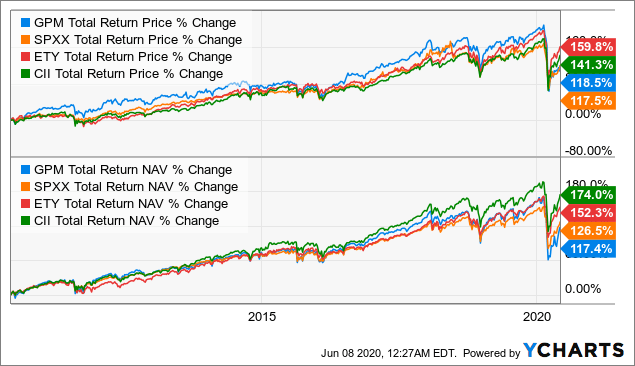 Moreover, the fund holds 3 ETFs accounting for 30% of its holdings, and besides the “fees on fees” aspect, there’s a question as to why you would pay +1% management fees for the fund to just hold another ETF. The rest of the portfolio is in “S&P 500 Equal Weight Strategy” which could also be easily replicated by an ETF like Invesco S&P 500 Equal Weight ETF (RSP). All in all, you’re paying active-level fees for passive management.

The main redeeming feature of GPM is its wide discount of -12.65%, which is much wider than its 1-, 3- and 5-year averages of +0.43%, -0.44% and -3.42%, respectively. This could be nice as a swing trading candidate to capitalize on premium/discount mean reversion (1-year z-score is -3.3), but for the long-term holding, I’d prefer the Eaton Vance or BlackRock option income funds. 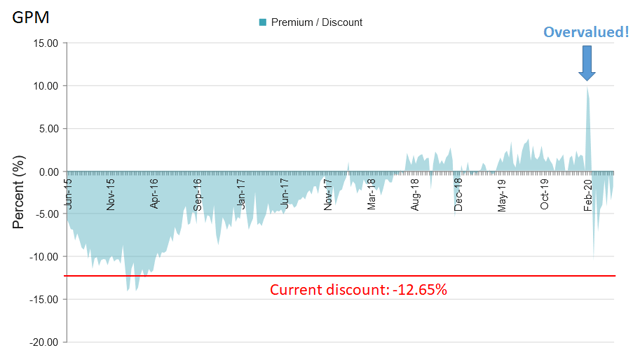 GPM’s forward yield is 8.60% after the distribution cut. As an aside, what was GPM doing at a near +10% premium earlier this year? If we had owned it, we definitely would have sold this fund at such a premium and replaced it with other cheaper option income funds, regardless of whether or not we knew that a market crash was coming. Remember, don’t let mean reversion catch you out.

At the CEF/ETF Income Laboratory, we manage market-beating closed-end fund (CEF) and exchange-traded fund (ETF) portfolios targeting safe and reliable ~8% yields to make income investing easy for you. Check out what our members have to say about our service.

Disclosure: I am/we are long MGU. I wrote this article myself, and it expresses my own opinions. I am not receiving compensation for it (other than from Seeking Alpha). I have no business relationship with any company whose stock is mentioned in this article.