When Joe Biden enters office in January, his closest foreign policy adviser will be a guitar-playing Beatles fanatic who first started promoting American values as a high school student in Paris during the cold war.

On Monday, the president-elect said he had chosen Antony Blinken as secretary of state, elevating a three-decade fixture in Democratic foreign policy circles, who first worked with Mr Biden in the Senate.

Mr Blinken’s return to the corridors of power will come as the US tries to recover from the battering it has taken on the world stage during four years of Donald Trump’s international isolationism.

Tony was an American in Paris. He was very conscious of being an American and he believed in US values. But he also understood how US policy affects the rest of the world

Although some of the challenges will be familiar to Mr Blinken, he will also face new dilemmas such as dealing with an even more assertive China.

Robert Malley, the head of International Crisis Group who was Mr Blinken’s high-school classmate, said the Washington veteran had the perfect background to restore American credibility.

In addition to coming from a family with foreign policy pedigree — his father served as ambassador to Hungary and his uncle to Belgium — allies say he can put himself in the shoes of others because of his experience overseas.

“Tony was an American in Paris — and both terms are key. He was very conscious of being an American and he believed in US values. But he also understood how US policy affects the rest of the world because he lived overseas and witnessed how others view America,” Mr Malley said.

“At that time, the US was not particularly popular in Europe, and in France in particular. Tony navigated those two universes.”

In a recent Intelligence Matters podcast, Mr Blinken said the US had to rebuild alliances to tackle the “democratic recession” enabled by Mr Trump that let “autocracies from Russia to China . . . exploit our difficulties”.

Mr Blinken is a pragmatic realist who believes in US power but understands its limits. He will also have the most valuable currency in Washington — the ear of the president. He is so close to Mr Biden that some see him as his “alter ego”.

Nick Burns, the former number three state department official who has known Mr Blinken since the Clinton administration, said his network of friends around the world is coupled with an incredible range of experience from his time in the Senate, state department, and White House.

“He was at the table for all of the important meetings in the Obama administration for eight years and has unique insight into the full range of national security issues,” said Mr Burns.

A soccer-playing 58-year-old, who has uploaded two of his songs on Spotify and sometimes has a guitar in the background during video calls, is widely liked for his unassuming manner and inclusive approach.

In his high-school yearbook, the page with his photograph is inscribed with the Pink Floyd lyrics, “just another brick in the wall”, hinting at his willingness to eschew the traditional rigid hierarchy of Washington.

A former top state department official said he was popular because he valued opinions regardless of how junior or senior the person was, and was confident enough to credit others. “It’s never about him or his ego.”

But some say his inclusive style meant his core beliefs were sometimes hard to ascertain. “I don’t have a good read on his foreign policy thinking because he did not impose himself,” says a former Biden Senate aide.

One former Obama administration official said he also had a tendency to hold too many meetings and punt decisions. “As the big dog, will he drive towards decisions or needle issues to death?” they asked.

Defenders said he simply wanted to avoid rushing into bad decisions. The former Senate aide added that he was good at ending meetings on time. “When someone tried to extend a meeting with extraneous comments, he would give them a yellow card. If you did it again . . . it was a red card.”

While some found his views opaque, others stress that he has long been clear about the importance of promoting democracy and human rights in American foreign policy.

Michael McFaul, a former US ambassador to Russia, said Mr Blinken and other Democrats created a group called the “Phoenix Initiative” to debate whether the party needed a more robust national security approach after John Kerry lost to George W Bush in the 2004 election.

He said that when the group held debates, Mr Blinken was also a strong proponent of using US power for good and advocating for human rights. “I was very struck that he was passionate about that,” he said. 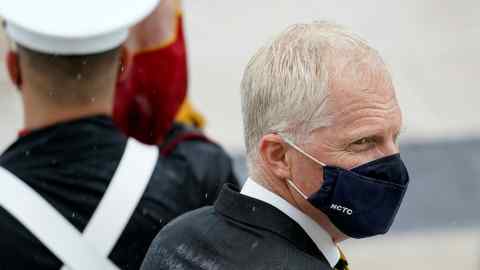 Philip Gordon, a former Obama administration official, said that view was informed by his family history. His Polish-born stepfather Samuel Pisar survived Auschwitz and eventually wound up in the US, where he became a successful international lawyer, while other relatives entered the US as refugees.

“That has left him believing that the US can and should do good in the world,” said Mr Gordon. “But I would pair that with the notion that he is a real pragmatist who also understands the limits of American power. He is anything but an ideologue.”

The other former Obama official said Mr Blinken would probably take a tougher stance on human rights than the Obama White House. “Tony would be visibly tougher on Russia and more receptive to the idea of ideological competition with China, cranking up a few notches the democracy promotion and human rights dimension of foreign policy.”

Mr McFaul said Mr Blinken was also more decisive than some believe. When he argued that Mr Biden should meet Russian opposition figures after a meeting with President Vladimir Putin in Moscow in 2011, “it took Tony about three seconds to say that is a really good idea”, in contrast to a much harder sell with the Obama team in 2009.

Mr Blinken’s views on alliances and promoting democratic values fit with a growing view in Washington that the US needs to work more closely with allies to gain greater leverage to tackle China.

One former European official, who has worked with Mr Blinken, said the fluent French speaker would be well received in Europe and would help repair the damage done over the past four years. But he said he would do so in a more low-key and more collegiate way than some predecessors.

“He’s not a man to make the front page,” he said. “He’s not Henry Kissinger, in a good and bad way.”