Joe Biden has delivered a direct warning to Boris Johnson that he can forget any prospect of a US-UK trade deal if the prime minister allows the Northern Ireland peace process “to become a casualty of Brexit”.

The Democratic presidential candidate was a critic of Brexit and his warning to Mr Johnson is a sign that relations between the two men could be strained if Mr Biden wins this year’s election.

In a tweet on Wednesday, Mr Biden took aim at the British prime minister’s plan to override parts of the UK’s legally binding EU withdrawal treaty relating to the highly-sensitive Northern Ireland protocol — which seeks to prevent the return of a hard border on Ireland.

Mr Johnson argues he needs to acquire new powers — contained in the UK internal market bill — to stop the EU undermining the peace process by taking an “extreme” interpretation of the protocol, building a hard trade border between Northern Ireland and the rest of the UK.

But Mr Biden led a raft of warnings from top Democrats to Mr Johnson not to take risks with the peace process by unpicking a carefully negotiated treaty, weighing into the Brexit debate for the first time.

“We can’t allow the Good Friday Agreement that brought peace to Northern Ireland to become a casualty of Brexit,” he tweeted. “Any trade deal between the US and UK must be contingent upon respect for the Agreement and preventing the return of a hard border. Period.”

Mr Johnson told MPs on Wednesday that he had not received any warnings from Karen Pierce, Britain’s ambassador to Washington, that his proposed bill might endanger a trade deal with the US. “Absolutely incredible,” muttered one MP after the meeting of the House of Commons liaison committee.

But Kim Darroch, former ambassador to Washington, said last week that he did not think Mr Biden would be looking for a quick trade deal with Britain in any circumstances, adding: “Biden is not a fan of Brexit.”

Mr Johnson’s supporters, some of whom would prefer a Donald Trump victory in November’s elections, played down the significance of Mr Biden’s tweet, while others were more hostile.

Former trade minister Conor Burns tweeted: “Hey @JoeBiden would you like to discuss the Good Friday agreement? It is also called the Belfast Agreement so it doesn’t offend both traditions. Did you actually know that? I was born in NI and I’m a Catholic and a Unionist. Here if you need help.”

Dominic Raab, UK foreign secretary, used a visit to Washington to try to calm the row. He posted a picture with Nancy Pelosi, Speaker of the House of Representatives, saying he discussed “Brexit and UK’s stalwart commitment to Belfast (Good Friday) Agreement”.

Meanwhile, Mike Pompeo, US secretary of state, sought to boost Mr Johnson’s hopes of securing a trade deal with the US after talks with Mr Raab.

He insisted he was confident the UK would get its post-Brexit trade negotiations with the EU “right” and said talks on a bilateral trade agreement were on track “for a successful conclusion before too long”.

“We have great confidence that they will get this right, and in a way that treats everyone fairly and gets a good outcome for what it was the people of the United Kingdom voted for now several years back,” Mr Pompeo said, standing alongside Mr Raab. 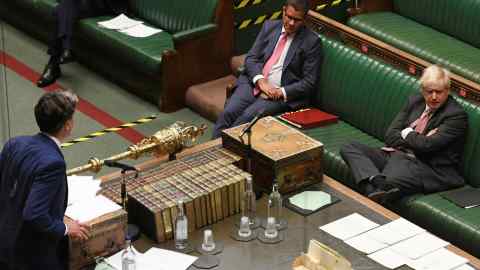 His comments came after senior US politicians expressed deep concerns over the UK’s internal market bill.

However, neither Mr Pompeo nor Mr Raab gave a timeline for concluding a trade deal. London has already written off any hope of securing an agreement before the November presidential election.

Mr Pompeo’s support is unlikely to ease the concerns of a growing number of opponents in Congress, who would have to agree to any bilateral trade deal between the US and the UK. That would probably put House Democrats in a key position even if Mr Trump — who has repeatedly backed Brexit — were to win re-election in November.

Ireland’s ambassador to the US, Daniel Mulhall, has spent the past 10 days rallying opposition in Congress, the administration and the wider Irish-American community to any push that might undermine the Good Friday Agreement.