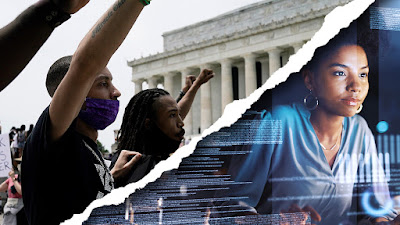 On Tuesday, Vice President Joe Biden called for an amendment to the Federal Reserve Act that would require the Fed to report on racial economic gaps and what policies the Fed is implementing to close these gaps.

“We’re going to strengthen the Federal Reserve’s focus on racial economic equity,” Biden said in a speech in Wilmington, Delaware. He said the Fed’s existing mandate promotes maximum employment and stable prices and “should add to that responsibility, and aggressively target persistent racial gaps in jobs, wages and wealth.”

As I have pointed out before, such a BLM Fed effort would require the Fed to create even more price inflation via money printing so that the minimum wage would not be an impediment to unskilled black youth in getting a first job to pick up skills.

Alternatively, the Fed could pump money into black firms or firms that take on additional black employees.

This is absurd central planning that has a Marxist leaning foundation to it. As I have previously warned, Biden has refused to name the advisers giving him economic policy advice but the circle appears to include radical leftist. The BLM Fed amendment proposal could only be the work of a radical leftist.

Bloomberg adds that a Biden aide said that diversity would be an important factor in all his administration’s personnel decisions, which would include nominating members of the Federal Reserve Board of Governors and, eventually, a board chair.

Of course, the real problem which is at the heart of the severe wage gap is the minimum wage (rather than pumping money and creating price inflation). It should be abolished since it does nothing but prevent low skilled black youth from getting that all-important first job  (See: How to Smash Slick Lefties Who Advocate the Minimum Wage). Additionally, inner-city public schools are notorious for their inability to provide proper schooling. Inner-city public schools should be abolished and taxes should be ended for inner-city residents.

Previous PostThe microeconomics of cryptocurrencies | VOX, CEPR Policy PortalNext PostAn Astounding 60%-80% of Retail Traders, Depending on Broker, Lost Money Trading Forex CFDs — Illegal in the US but Not the EU, UK, Australia & Other Countries