US allies in Asia have urged Joe Biden to avoid repeating the strategic failures of the Obama administration as the US president-elect sets out to repair the diplomatic damage wrought by four years of Donald Trump in the White House.

Expectations are high that Mr Biden will steer the US from the transactional and heavy-handed dealings with traditional security allies that characterised the Trump presidency and dented Washington’s credibility as a military partner in the region.

But officials and experts across Asia are concerned a myopic domestic focus will lead to neglect of pressing issues such Kim Jong Un’s weapons of mass destruction and border clashes between India and China.

There is also worry that moves to ease tensions between Washington and Beijing risk undermining US commitments to Taiwan as well as opposition to Chinese military expansion in the South China Sea.

John Delury, an Asia expert at Yonsei University in Seoul, warned that the “overwhelming” domestic agenda — including guiding a divided America through the coronavirus pandemic — meant that problems such as North Korean nuclear talks would no longer be a priority.

“That will be a mistake. Biden is going to have to find bandwidth to be proactive on the North Korea piece because it doesn’t solve itself,” Mr Delury said. In the final presidential debate in October, Mr Biden criticised Mr Trump for legitimising Mr Kim, whom he described as “a thug”. He said he would meet Mr Kim only if the North Korean dictator agreed to “drawing down his nuclear capacity”.

There was a “danger”, Mr Delury said, that the US slipped back into “strategic patience” — the much criticised Obama-era policy under which there was little engagement between Washington and Pyongyang and Mr Kim was able to make rapid advances in nuclear weapon technology.

Under the Trump administration, Taiwan, which China claims as part of its territory, has enjoyed the closest ties with the US since Washington switched diplomatic recognition from Taipei to Beijing in 1979. This warmer relationship coincided with unprecedented military pressure from China.

Some Taiwanese officials worry that a Biden administration could seek to smooth tensions with a more accommodative stance towards Beijing, sacrificing Taiwan’s interests in doing so.

Wang Ting-yu, a ruling party lawmaker, said Taipei was apprehensive the US might adjust its view of China from a threat to just a competitor.

“To the US this might only be a small diplomatic shift but to Taiwan it could be a matter of life and death,” said Mr Wang.

In New Delhi, officials hope Mr Biden will be more engaged than the Obama administration, particularly given the challenges posed by China’s expanding influence across the region.

“A [possible] President Biden walks into a very, very different world than the Asia that Obama walked into in 2008,” said Ashok Malik, an Indian foreign ministry policy adviser. 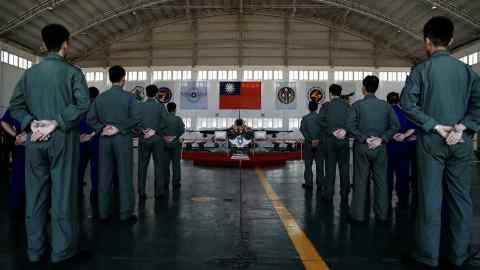 South-east Asia looms as another flashpoint for the Biden administration. From a tough statement by the US in July calling China’s vast maritime claims in the South China Sea illegal, to its more frequent naval and air force operations, the Trump administration has raised the stakes and entered into open military competition with China in the area.

The aggressive Trump policy followed years of inaction under Mr Obama. But while Mr Trump’s combative approach raised tensions with China, rival claimant countries such as the Philippines and Malaysia are yet to reap any benefits.

“Effectively and permanently protecting these countries’ fishing fleets and resource exploration platforms from Chinese paramilitary coercion is what we will be looking for from Washington,” said a senior Malaysian diplomat.

In stark contrast to Mr Trump’s intense pressure on allies to increase their financial contribution for hosting US troops, Mr Biden insisted he would mend ties with partners such as Seoul and Tokyo, boosting optimism of at least a return to conventional diplomacy.

“I’ll stand with South Korea, strengthening our alliance to safeguard peace in East Asia and beyond, rather than extorting Seoul with reckless threats to remove our troops,” Mr Biden wrote in an op-ed days before the November 3 poll.

However, while Mr Biden might be more predictable than Mr Trump and “undo many Trumpian policies” he will probably still prioritise US interests, albeit “without saying ‘America First”, argued Kunihiko Miyake, research director at the Canon Institute for Global Studies, a Tokyo think-tank.

“To some extent, it would probably be a more sophisticated version of Trumpism,” he said, because the strategic picture has changed so fundamentally over the past four years.

Video: How the US 2020 election will determine the balance of power in Asia